Fuck s144! Some quick analysis of the Brighton squat trial

The law criminalising squatting in residential buildings was introduced a year ago and is now being tested in the courts... and it's not looking that effective. This report with links at 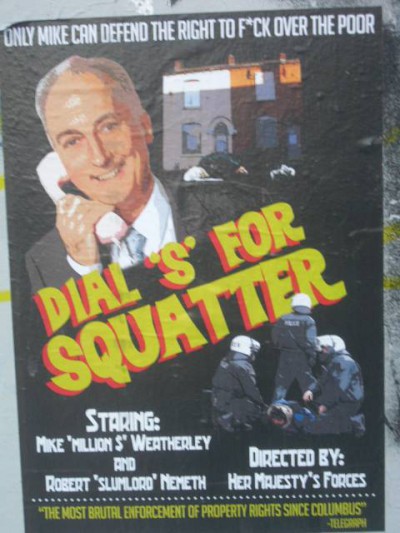 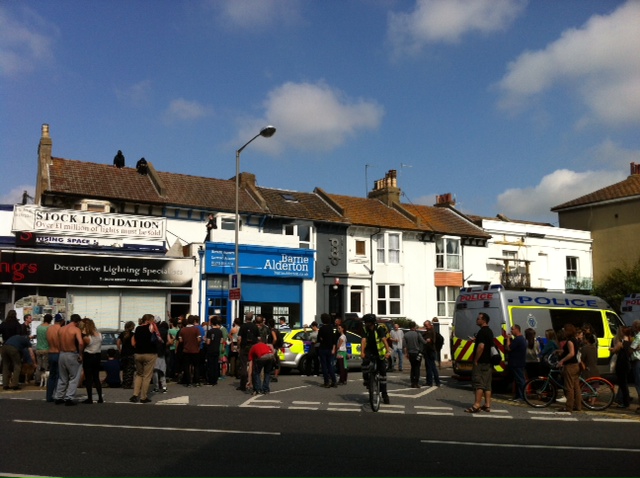 Our three friends who were accused of the “offence” of occupying an unused allegedly residential building have all now been cleared of any “crime.” The three were arrested in Brighton last year, just two days after the Legal Aid, Sentencing and Punishment of Offenders Act (LASPO 2012) had become law. When they came to trial, two had charges dropped, the other one was convicted purely on the word of a copper. On appeal, this conviction was quashed on October 31, over a year later. So finally we can celebrate!

Now at last we can talk about the case and what it means for squatting. Basically, the news is good. Very good in fact. This new law is unenforceable, just as groups such as Squatters Action for Secure Housing (SQUASH) and the Squatters Network of Brighton and Hove always maintained.

If you are unlucky enough to be arrested for the “sin” of taking shelter in a residential building, we would advise saying nothing to the police (including giving a no comment interview) and pleading not guilty to the charge of squatting. We would also advise getting a good solicitor from a firm with knowledge of the recent law changes, such as Kellys or Bindmans (numbers below).

In every case, the exact way to attack section 144 of LASPO will of course be different, but it’s useful to see areas that can be exploited. Here, in this instance, the crucial bits were really clauses 1 and 3. The points of argument were what ‘living’ means when used as follows: “the person is living in the building or intends to live there for any period” and what ‘adapted’ actually means in “a building is ‘residential’ if it is designed or adapted, before the time of entry, for use as a place to live.” We’ll come back to the meaning of residential later. As regards living, it is in fact very hard to prove that someone lives somewhere. Most people know that, since when you legally live somewhere and want to open a bank account or whatever, the standard thing is to supply bills or other official letters as proofs of address (as well as ID).

Why did this person get convicted originally and not the other two? Well, because this one person spoke to the police, allowing a cop to claim he admitted to living in the property which was raided. The magistrates hearing the case believed the cop, thus the squatter was convicted. On appeal, a judge (who is legally trained, unlike magistrates) quickly threw out the unsubstantiated claims of the cop. Further, the judge stated that if the police want to prove a person is living in a squat, they would have to provide evidence based on:

1 Observation (ie evidence that the person was using the squat)
2 Forensics (ie examining food, clothing, letters in the squat to establish the person was linked to the squat)
3 Detailed interviews (eg neighbours confirming)
4 The normal requirements of residence (eg bills in the name of the person to that address)

This all seems entirely reasonable. And also expensive and unworkable for cops, who will effectively have to mount a major surveillance operation to prove a relatively minor “crime.” Further, any squatter with a brain would surely notice such a surveillance operation and take that as a warning. So we think it will actually be very hard to successfully prove someone “lives” in a squat. We may see that issue play out again in future court cases.

Coming back to the separate question of what ‘adapted for residential’ means in law, in this case the judge said that since he had already thrown out the conviction on other grounds, it would be “improper” to analyse what residential means. So this will also be subject to further challenges in future, no doubt. What we can say is that in this case, a building which was claimed to be residential actually was not, legally: The police said it was residential because they were told that by the property management company; The property management company said it was residential because the building had been adapted to residential; But as our barrister showed, the planning permission to switch from commercial to residential had never actually been executed. A place which was supposed to be 4 residential flats was clearly a non-residential space with two rooms, a kitchen and a bathroom. The prosecuting barrister (bless) argued it was residential because it looked residential. It had a fridge and a shower and electricity. Obviously that argument is going nowhere. Non-residential places such as chambers, offices, schools, even courts, all may have these things but they are not residential. Every case is different, but clearly if a place looks residential it may not actually be in the eyes of the law. (There is much to explore here).

So what tentative lessons can be drawn? Here are some suggestions which we hope are useful:

1 Never tell police you live in a building they claim is residential (the protest angle seems to be working out well for the occupation of the two Council houses in Southwark).
2 Never plead guilty to the charge of squatting in a residential building.
3 Get good legal help
4 A good barricade is always welcome
5 CPS = Can’t Prosecute Shit.

This is not over yet by any means. But as just one opening salvo in the battle to establish what it means to squat post-criminalisation, this case has shown that it will be very hard to convict squatters. Especially squatters who have done their homework on the building they intend to occupy. And squatters who intend to fight repression. Drop us a line if we can help. The recent news from Wales is also encouraging!

We didn’t do our homework particularly well and we were able to fight the repressive conviction because we were lucky enough to have support around us and because we think this new law is stupid. We won. You could too.