As part of the more than 400 reported Anon events globally, billed as a “million mask march”, thousands of protestors amassed outside Parliament and then marched through London, while a few hundred joined the ‘Coalition of Resistance’ for their staged civil disobedience on Westminster Bridge. 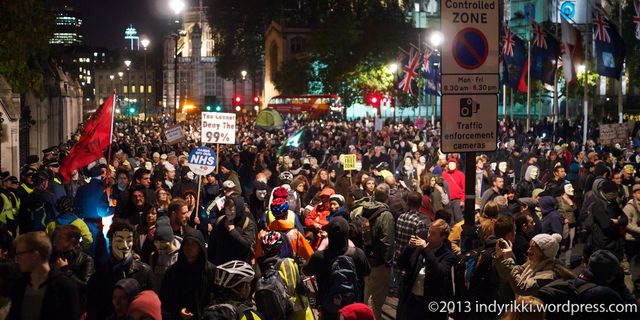 Predictably, what the ‘Coalition of Resistance’ billed as a mass act of civil disobedience turned out to be a staged event, co-ordinated and agreed with the authorities, who officially closed Westminster Bridge for a proscribed amount of time. Then Coalition stewards helped clear the road of the few hundred protestors they’d mustered, as they always have done since the Iraq marches and beyond.

Meanwhile, the non-hierarchical and disorganised ‘Anonymous’ movement managed to attract more than two thousand enthusiastic mischief-makers who after filling Trafalgar Square, where Russell Brand attracted media attention by his attendance, they suddenly set off at 6.30 on their planned march down Whitehall accompanied by dozens of TSG cops. On the way, a small group gathered to shout slogans at the gates of Downing Street, which was protected by police lines.

As a significant proportion of the demonstrators wore Anon/Guy Fawkes masks, it must have warmed the hearts of Time Warner shareholders, since the company receives a royalty for every mask sold to these anti-Capitalists. Still, worn together with a hood, the mask functions as a great anonymiser, and a large crowd in these masks create quite a powerful visual effect.

As the march continued towards Parliament Square, police had set up some blocking vans and a double line of TSG in order to herd people onto the Parliament Square Gardens grass. With no stewards in sight, the police had to rely on the compliance of the crowd, but most folk made up their own minds not to be corralled, and they held back in Whitehall, blocking both approaches to Westminster Bridge, and in no hurry to move.

The few dozen protestors who’d entered the ‘pen’, on seeing lines of crowd barriers, just kept walking, and poured out at the other end, catching the police unaware and staging an immediate sit-down in the road, blocking the approach from Millbank.

The police cordon at Whitehall was not absolute, and as some people made it on to Westminster Bridge Road by entering the Underground or by concealing their Guy Fawkes masks and using persuasion, more and more people began drifting into the road in front of Parliament and behind the police lines. There were some unnecessary scuffles at the barriers caused by over-eager police trying to stop people going on to the road, despite the fact that obviously it was now filling up with Anons coming from other directions. Police also scuffled at the gates of Parliament as a number of masked protestors made a good-humoured attempt to storm the grounds.

As numbers grew in the road, police withdrew their lines and gave up control, but there were a few minor incidents as police first tried to clear a route forward for vehicles trapped in crowd, and then gave up and helped the traffic reverse out and divert. Some activists did however clear a forward path for a taxi that was carrying a woman in a wheelchair.

By 7.30pm, the main road in front of parliament was completely full of people, many of whom were masked, and the party vibe increased as a loud sound system started up near the Churchill statue.

Over the next half hour, many of the Coalition of Resistance protestors joined in after their allotted time on the bridge, and the area was packed. Police managed to reopen the traffic around the back of the square, along Whitehall, and on to the bridge, but then suddenly a large group broke through the loose cordon, and along with the sound system, set off on an impromptu walkabout towards St. James’s Park and on to the Mall.

Some continued on to Buckingham Palace, where there were some fireworks set off and a few arrests, but most (a group of nearly a thousand), turned away from a cordon, and diverted up St James Street to begin a long tour of the West End.

There was no focus or aim to this march, other than a desire to reclaim the streets. The Anons walked straight past an unguarded Carlton Club, stopped and shouted at some suits drinking champagne at a private club upstairs along the same street, then ignored Fortnum and Masons in Piccadilly, but moved bollards and barriers around mischievously on Regent Street.

Although an anti-capitalist tax-avoidance theme then began, with attempts to rush Top Shop and McDonalds stores along Oxford Street, the Apple store had been passed by, and Primark and Starbucks were also ignored. Police were finding it hard to organise and keep up, but FIT teams ran alongside, and each targeted store became a focus for a few minor scuffles as police and protestors raced to the doors.

By a little after 9pm, at Tottenham Court Road, the march was met by an effective police cordon, and people turned back and made their way down through Soho.

With numbers now dwindling to a couple of hundred, they returned through Trafalgar Square back to Parliament, and following in at least a dozen riot vans, it was clear the police were capable and intent on keeping the roads clear this time.
So there were some minor clashes, and a few more arrests, but with about as many police as protestors, it looked to me like the protest would peter out and I left them to their party on the Square.