Private tenants from across London today held ‘housewarming party’ at a development of newly built private rented flats in Stratford, east London, in protest at soaring private rents and the government’s failure to tackle the problem. London rents have been rising at around 7 per cent per year. 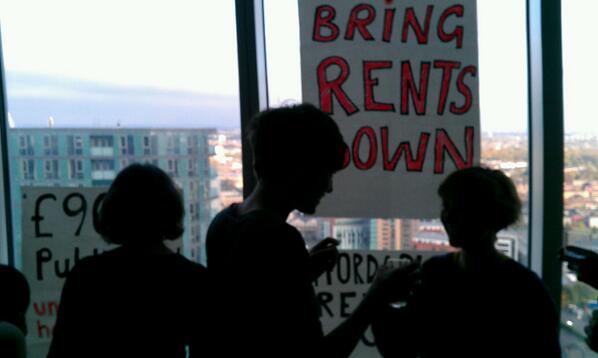 The flats are built and let by Genesis [2], which has been shortlisted to receive funding through a government subsidy scheme [3] for private rented housing in three developments in London [4].


Rents in the occupied development, marketed as ‘Stratford Halo’, start from £1,700pcm for a two bedroom flat, the minimum size needed for a family with children – of which there are now more than 1.3 million renting from private landlords in England [5]. Based on figures published by Shelter, these rents would only be affordable to families with an income of £76,000 or more [6].


Emma Bradshaw, one of the activists, said:

“Private renting is expensive and gives people no security – the last thing we need is more of it. Rather than supporting developers to build expensive private rented housing that is only affordable to the very wealthiest, the government should bring in measures to keep rents under control and invest in good quality genuinely affordable social housing that gives ordinary people the security they need.”


In total, £1bn is being made available to developers to build new private rented properties as subsidised finance at an estimated minimum cost to the public purse of £90m. [7] The government claims that the first £700m of the funding “has the potential to deliver between 8,000 and 10,000 new homes”. [8]

If the £1bn was used to build social housing on publicly owned land, around 10,000 new homes could be built [9], with money recovered through the rents. This would also help to reduce the housing benefit bill, 40 per cent of which now goes to private landlords as one in four private tenants currently needs housing benefit to afford their rent. [10]

1. Figures published by LSL Property Services found that London rents rose 7.9 per cent in the year to March 2013 – eight times faster than wages.

2. According to its 2012-13 financial statements, “Genesis aims to be a leading property based service provider”, providing housing for sale and rent (at both social and market rents). The company had a turnover of £293m and made £36.7m from sales of property in the year to March 2013. It also received £34.3m in grants. In ten years time (2022-23) the company is projecting an operating surplus of £73m.

3. The Built to Rent fund provides subsidised finance (through loans or equity) to private developers for privately rented homes which will be let at market rents. £1bn is being made available through the scheme, with 43 companies with a total of 45 bids currently being assessed for the first £700m of finance – an average of £15.6m per project.

4. A Freedom of Information request to the Greater London Authority, which is assessing the bids for Build to Rent funding in London, reveals that the following three Genesis developments have been shortlisted to received funding through the Build to Rent fund:

A total of 15 London developments from 12 developers have been shortlisted to receive funding through the scheme.

6. Shelter’s Private Rent Watch studies are based on rents being affordable if they take up no more than 35 per cent of net income. At a rent of £1,700 per month, the cheapest two bedroom flats in the Stratford Halo development would only be affordable to households with a monthly net income of £4,857, or £58,286 per year. This equates to a gross income of around £76,000 per year (assuming two earners with equal salaries, claiming child benefit for one child and having no other income).

7. Calculation based on funding provided through loans to developers with A-AAA credit ratings and normal collateralisation for a ten year period, with annual interest payments and the principle repaid at the end of the period. At current interest rates, developers will pay 1.74 per cent interest (source), yet the government pays 2.66 per cent (source). The minimum cost to the government of the loans (excluding operating costs for the scheme) is £92m (lending money at 0.92 per cent below their cost of borrowing £1bn over the ten year period). The effective subsidy to the developers is estimated at around double this figure, as the developers are able to benefit from access to loans at a considerably lower rate via the government than they would be to access themselves directly on the market.

9. Based on building costs (excluding land) of £100,000 per home (source: New Economics Foundation)