Newcastle City Council: acting UNLAWFULLY!
DWP: acting UNLAWFULLY!
Come to the meeting to plan action we can take against the council, DWP and the tribunals services to force them to hear all appeals and stop implementing the bedroom tax! Sat 30 November, 3pm, St Michael's Centre, 2 Raby St, Newcastle NE62AL. 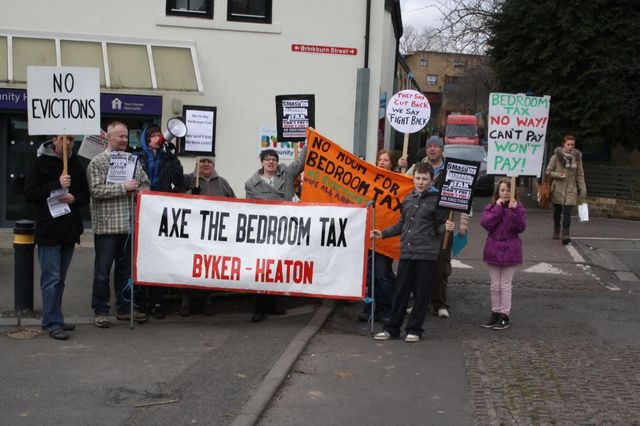 THIS IS A CAMPAIGN THAT WE CAN WIN!

People have won because rooms were less than 70 square feet; because they have never used their spare room as a bedroom; because they use it for equipment to help with their disability or on human rights grounds.

The 2004 Housing Act makes it a statutory duty of councils to inspect rooms for health and safety and states that rooms of 70sq ft for over 10 year olds are classed as overcrowded.

This clearly shows that Newcastle Labour council can EASILY and LEGALLY take action to stop the bedroom tax for thousands of families if it wished to; so far the council has done NOTHING.

Hundreds of people in the North East have appealed the bedroom tax on the same grounds listed above yet not a single appeal has been heard in Newcastle.

We need to campaign to have an appeal brought to tribunal in Newcastle. This will open the flood gates for all appeals to be heard in the region.

The Labour Party claim they are against the bedroom tax. Newcastle is run by a Labour Council. If they were truly against it they would stop implementing it now.