The Solidarity Collective: The beginning of dialogue

The Solidarity Collective was been brought together in difficult circumstances, following what we believe to be attacks on freedom of speech, expression and association within wider activist networks. 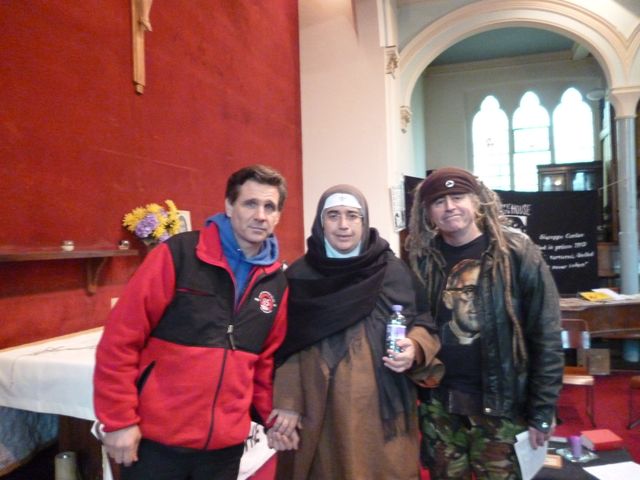 We feel that we must contribute to the debate about the inclusion of Mother Agnes at a Stop The War Coalition event in London. Following the threats to withdraw by Jeremy Scahill and Owen Jones, Mother Agnes has removed herself from the panel. We have been watching this story develop since Sunday 17th of November. Unlike others we have thoroughly researched the issues and showed restraint in responding, avoiding reacting in a knee jerk fashion. This is our position- taking into account all the facts we have managed to establish.
The ‘No Platform’ strategy by proxy is totally unacceptable and although not all of us in the collective would endorse the views of Mother Agnes we defend her right to express them. Having spent a number of days researching Mother Agnes and her involvement in Syria, we could find nothing to suggest she is pro-Assad. In fact when researching, we found an open letter, published in a newspaper, addressed to President Assad, which was highly critical of the regimes treatment of prisoners and injured. Even if she was, we believe she still has the right to her opinion. We are not advocating support for either side. We are saying that there is clearly a pro-intervention/pro-war agenda at work and we cannot stand by and not raise our voices to support the right of Freedom of Speech.
Our concern for the suppression of Freedom of Speech is the very issue that brought us together. Similar to the attacks on an anti-war activist at the Anarchist Bookfair and the Chelsea Manning Fund Raising event, (

http://tinyurl.com/nr7nvcp) in this case a considerable level of disinformation and lies, which are being reported on and exposed by Indymedia. With that in mind we are calling on activists to question everything before they make up their own minds. It may be worth noting that these attacks on activists, which have been going on for a number of years, may be being manipulated by state players who are certainly benefitting from the attendant angst and discrediting of the movement.
We fully support the brave move by the London Catholic Worker group based at Guiseppe Conlon House who have invited Mother Agnes to a meeting during their retreat. It is only when we are fully informed on the Syrian conflict by those who live daily with the consequences that we will be be in a position to make decisions.
Mother Agnes-Mariam de la Croix is an unlikely target for left-wingers and anti-war activists. As the head of the Musalaha (‘reconciliation’) organisation in Syria she was a key figure in orchestrating the evacuation of 5,000 (mainly women and children) from the besieged town of Moadamiya on 13th October 2013 which involved great personal risk in having to secure the trust of both government forces and leaders of the Free Syrian Army. Historically, she has been critical of the government generally as well as condemning violence from both sides of the struggle but defends their right to retain power over Syria as she fears instability, the potential subversion of a revolution by foreign powers and, fundamentally, cannot condone the violent means used by the rebels.
However on 16th November 2013 Mother Agnes was compelled to write to the Stop the War Coalition withdrawing her participation in their anti-war conference in response to threats they had received from prominent journalists Owen Jones and Jeremy Scahill to refuse to attend unless she was dropped from the speakers list. Their actions appear to have been prompted initially by tweets from Muhammed Idrees Ahmad and his Pulse Media site urging them to undertake the course they have embarked upon. He has been strident from the outset of the Syrian conflict in support of Western intervention. Left wing media in the UK has also been subject to an insidious deluge of propaganda questioning the validity of her accounts of the conflict, what her position is and her involvement with the Assad regime. A marvellous smear campaign as designed by Michael D Weiss has done much to further the cause of promoting her as an Assad apologist and all round devious character. Incidentally some of the highlights of his CV are as follows: former director of Zionist pressure group Just Journalism whose stated concerns included ‘how Israel and Middle East issues are reported in UK media’, former fellow at Neo-Conservative war lobby think-tank Henry Jackson Society, he is a lead rebel advocate with Now Lebanon and also the author of proposals for US intervention for the Syrian opposition.
Much of the slander is sustained by her self proclaimed mission to provide what she believes are the true narratives of the conflict which are routinely, she says, misrepresented in global media. One such incident is the August 21st 2013 chemical attack in Damascus. The accepted truth as ‘assessed’ by the US government is that the attack was carried out by the Assad Regime. There was a threat of mass-resignation of CIA workers who refused to have their names attached to the document published pertaining to this ‘fact’. Mother Agnes as well as some credible impartial sources insist that it is much more likely that this was a rebel attack.
Surely, if anything, the contentiousness of her pronouncements underpin the importance of her attendance at the Stop the War event? Never mind the fact that she may well be well informed due to the fact of being a first-hand witness and the fact that her views are shared by a significant portion of Syrian society- if there are activists who truly believe she is a malevolent influence should they not relish the chance to challenge her? The ‘No Platform’ paradigm of the ‘selective free-speech’ contingent of activism is a nonsense that reeks of fanaticism, obstinate ignorance and creates bitter divisions between people who are all apparently intent on working towards peace. Our consensus is critical of the idea that somehow blood could be spared by foreign military intervention in Syria; “the path to freedom and equality is a peaceful one.”(Mairead Maguire, Nobel Peace Laureate).

The Solidarity Collective is committed to seeking out truth through absolute freedom of speech and supports people’s universal right to be heard. Over the coming weeks we will be meeting and discussing the difficulties that we have faced over the last number of years. We are aiming to come up with alternative to deal with conflict within the wider activist networks and we would ask people to keep an open mind. The latest incident included physical attacks on peace activists and staff at a fundraiser for Chelsea Manning. Again we see the emerging pattern of a verbal and /or physical attack followed by online justification and a smear campaign afterwards, presented as objective and factual. For example, this latest statement: (

We would call on those people behind the various smear campaigns and incidents of violence against other activists, to consider the effects of this behaviour on individuals, their families, communities and the wider activist movements. We believe that the removal of some of these vicious blog posts and statements would be positive step in the right direction.