London protest at Npower over energy profits and fuel poverty

As Ofgem release figures showing that the ‘Big 6’ energy companies’ profits soared last year to 4.3% (a rise of 2.8%), with the supplier profit per household nearly doubling to £53, a number of different campaign groups brought their protest to the HQ of Npower in the City today, blocking the road for an hour and attracting a media scrum. 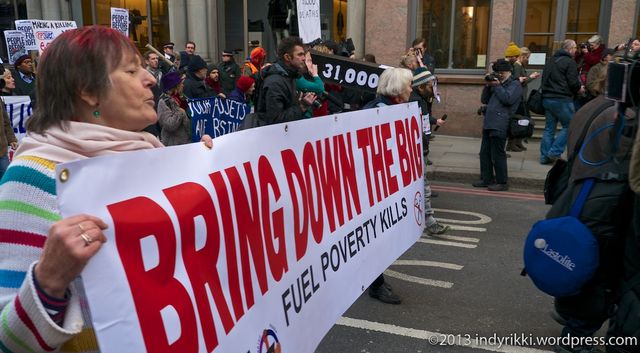 The ‘Big 6’ companies are Npower, E.ON, EDF, Scottish Power, SSE, and British Gas, and as well as the analysis of last year’s company accounts, Ofgem reported that the latest figure for profit per household had doubled yet again this year to an estimated £105. Back in 2009 the figure was just £8, and the latest figure still doesn’t even include the latest round of price hikes for this winter, which are way above inflation once again.

Meanwhile, the Office of National Statistics has just released figures that winter-related deaths last year rose to 31,000, with the elderly accounting for 25,000 of those, an overall increase of 29%. Doctors have stated they believe that much of the problem stems from fuel poverty.

As Government “austerity” cuts and payment freezes take hold for the unemployed, disabled, pensioners and young, and as more and more workers face wages below the living wage, zero hour contracts, and attacks on union rights, today saw a whole host of campaign groups take part in the action in the City of London.

Starting from Bank station at 11.30, a march comprising a couple of hundred people, some in wheelchairs, took a route round the block towards the Npower head office in Threadneedle Street. There were dozens of press photographers and some broadcast cameras, so it’s shocking that while the BBC covered the winter deaths story in its evening bulletin, there was not even a mention of today’s protest.

Among the groups represented were organisers Fuel Poverty Action, as well as UK Uncut, Disabled People Against Cuts, Greater London Pensioners Association and Occupy, and an array of speakers used the open mic as the crowd blocked the road outside Npower for a little over an hour. One speaker read out just a few of the testimonies that have flooded the Fuel Poverty Action mailbox with harrowing stories from vulnerable people unable to heat their homes.

Police lined the front of the building, and diverted traffic. About twenty minutes before the end of the protest there was also an intrusion of Police Liaison Officers in their baby-blue tabards, mingling with the crowd and collecting intelligence as usual.

Because of the cold, and the attendance of some elderly and other vulnerable groups, organisers suggested the protest should end voluntarily and in solidarity.
The London protest was part of a nationwide action, which also saw demonstrations taking place in Bristol and Oxford today.

FPA have announced they will be back soon to target another of the ‘big six’ companies. More info at