Objective and non-objective as well as official and non-official reports about the responsibility of the Syrian government are abundant, but that of the insurgents has been for too long covered up and only of late come under the scrutiny of human rights organizations and media spotlight.
By Nicola Nasser*

Creating a humanitarian crisis in Syria, whether real or fabricated, and holding the Syrian government responsible for it as a casus belli for foreign military intervention under the UN 2005 so-called “responsibility to protect” initiative was from the very eruption of the Syrian conflict the goal of the US-led “Friends of Syria’ coalition.

Foreign military intervention is now ruled out as impossible, but what the Inquirer columnist Trudy Rubin described on last November 29 as “the biggest humanitarian crisis in a decade” was created and this crisis “is worsening and no end is in sight” according to the International Federation of Red Cross and Red Crescent (IFRC) on November 11.

Objective and non-objective as well as official and non-official reports about the responsibility of the Syrian government are abundant, but that of the insurgents has been for too long covered up and only of late come under the scrutiny of human rights organizations and media spotlight.

The early militarization of civilian protests in Syria aborted all prospects for a long overdue peaceful change in Syria and created the largest humanitarian crisis in the world today.

Militarization opened the Syrian doors wide for foreign military, intelligence and political intervention to turn a national conflict between the haves and have-nots into a regional and international one.

More importantly, unguardedly and grudgingly but knowingly the so-called “Friends of Syria” also opened the Syrian doors to al-Qaeda linked offshoots as an additional weight to enforce a “regime change;” in no time they hijacked the armed leadership of the marginal local armed insurgency and became the dominant military power out of the control of the intervening regional and international powers who financed, armed and logistically facilitated their infiltration into Syria.

The responsibility of the “Friends of Syria,” both Arab and non-Arab, for the militarization and the ensuing humanitarian crisis was highlighted by the US former Secretary of State Hillary Clinton’s call on Syrian rebels not to disarm as much by the Turkish, Saudi and Qatari opposition to a political solution through the upcoming Geneva – 2 conference next January 22.

When the United States last December added al-Nusra Front to its list of terrorist organizations, topped by al-Qaeda, supposedly to tip the balance in favor of what is called, in US terminology, the “moderates” against the terrorists in the Syrian insurgency, it was a measure taken too late.

The US measure was only a green light for the beginning of another war inside the Syrian war, this time launched by The Islamic State of Iraq and the Levant (Da'āsh) against all others in the insurgency, including al-Nusra Front.

The end result was further exacerbation of the Syrian humanitarian crisis, for which the United States & partner “friends” could not be absolved of responsibility and should be held accountable.


The responsibility of the insurgency, which is politically sponsored, financed, armed and logistically facilitated by them, is now unfolding to uncover the fact that the militarization of the early legitimate peaceful protests has created the largest humanitarian crisis in the world today by the military tactics the insurgents used.

These tactics include mortar shelling of civilian densely populated areas under government control, targeting public services infrastructure of power, oil and gas, hospitals and health clinics, schools and universities, stealing public warehouses of strategic basic food reserves, dismantling and stealing public and private factories, flour mills and bakeries, interrupting or cutting transportation and traffic on highways, assassinations, extrajudicial killings and public beheadings, suicide bombings in city centers, targeting and besieging minorities, destroying and desecrating all religious and historic relics, flooding Syria with tens of thousands of foreign mercenary fighters obsessed by the al-Qaeda-like bizarre interpretations of Islam who violently compete among themselves for local leadership and war exploits because they are controlled by competing foreign intelligence agencies, and subjecting the population who come under their control to their brand of Islamic law courts, fatwas and orders, which dumped women out of society altogether to be reserved only for their sexual needs, etc.

However, exploiting the fact that the regular army was deployed along some seventy miles of the ceasefire line for a confrontation with the Israeli Occupation Forces (IOF) on the Syrian Golan Heights and trained for a regular warfare, their strategic military tactic was from the start to entrench themselves among the civilian population, using them as human shields, in countryside towns and villages where the army has no presence and where even the police and security agencies maintain minimal presence or none at all.

The early successes of the insurgents were military exploits against peaceful civilians; they were not achieved in military vs. military battles. It was enough for a few rebels to hold any such peaceful town or village hostage, but it needs an army operation to kick them out.

Except for the northern city of ar-Raqqah, which Da'āsh turned into what the Lebanese daily Al-Akhbar on last November 8 defined as “Syria’s answer to (Afghanistan’s) Kandahar – the birthplace of the Taliban” since the rebels stormed the city early last March, the Syrian state maintains control and presence in all the major cities.

But the official Arab Syrian Army had been on the defensive for some two years since the eruption of the insurgency in 2011. It needed this time to adapt, train and allocate counter insurgency units to fight in irregular city wars.

Since its strategic victory in al-Qaseer early last June it has gone on the offensive and is rapidly gaining more ground and achieving successive successes ever since.

However, the insurgency bears the main responsibility, mainly during the “defensive” interval, for the civilian plight; waves of refugees and displaced people came out from the areas under their control to find refuge either in government held cities or across the nearest borders with neighboring states. The latest largest wave of refugees of the Syrian Kurds into northern Iraq had nothing to do with government and was caused by infighting among insurgents.

The fact that the Syrian state and government were reacting rather than acting against the insurgency is now coming to light. This fact is explained better by the UK-based opposition Syrian Observatory for Human Rights, which reported on this December 3 that it had documented the death of (50,927) government soldiers versus (36228) insurgents including (6261) non-Syrian fighters.

Rebel infiltration into countryside towns and villages was the main reason for more than two million internally displaced civilians who left their homes as soon as they could out of fear either of the rebels themselves and their practices or the inevitable government retaliation. They were taken care of by the government in government shelters.

In addition to Christians and other minorities targeted by the rebels who posture as the defenders of Sunni Islam, most of the refugees and those displaced are Sunni Muslim Syrians and more than one million of them are hosted by their compatriot Alawites in the west of the country, a fact that refutes the narrative of the US government and media about a “civil” and “sectarian” war in the country.

* Nicola Nasser is a veteran Arab journalist based in Birzeit, West Bank of the Israeli-occupied Palestinian territories.

"The early militarization of civilian protests in Syria aborted all prospects for a long overdue peaceful change in Syria and created the largest humanitarian crisis in the world today."

Yeah, those Syrian demonstrators should have just let themselves be shot at without fighting back.... that wouldn't have been a humanitarian crisis at all.

[NB Full respect to any Syrian pacifists that may exist putting resistance into action, just no patience at all for armchair pacifists lecturing others on how their struggles should be less armed]

"Rebels" were, from the start, a movement like the Nicaraguan contras 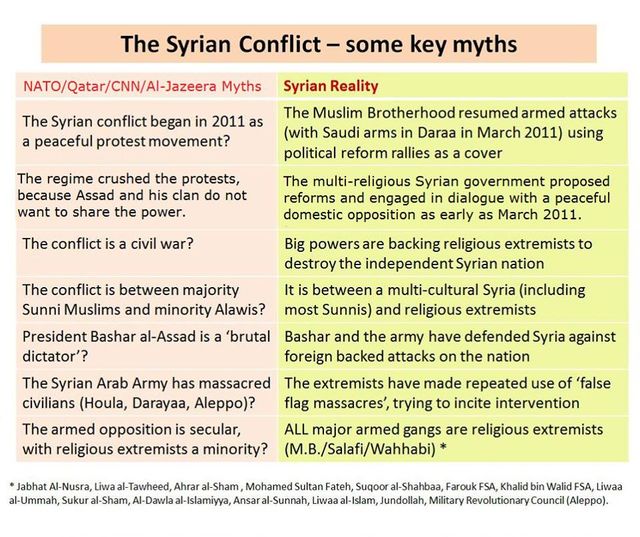 Every Syrian male is obliged to do 1 1/2 years of military service.


No Syrian living in Syria can be in doubt that the country is under a military threat, and has been so since the founding of Israel.

This is the reason behind the monolithic state, and the prioritized position of the military.


When a country is under threat of imminent war, it is necessary to establish some kind of a military discipline.

The civilian sector is in some respects subordinate to military decisions.


Other countries, e.g. Britain in WW2, have had similar rules.

In such situations, attacks on state structures are considered fifth column activity or treason.

The slogans of the opposition movement, when it started, were highly contradictory: "freedom" and "Islamic State".


The movement was not at all non-violent, as it presented itself in Western media.


Already before the start of the events, a large cargo of weapons fron Iraq was seized.


"while in the very first week of the Syrian crisis, 15 March 2011 to 21 March 2011, 110 unarmed Syrian anti-riot policemen were sniped by highly trained mercenary snipers all over Daraa alone, that was reported on all Syrian based media, but not on any foreign media

Part of the shooting was done by agents provocateurs on the demonstrator side.

Some of these snipers have been arrested.


The unrest was organized mainly by the Muslim Brotherhood, around fundamentalist preachers in Deraa, and with arms stashes in mosques.

In Western press, they pretended to be peaceful demonstrators, while actually they arranged attacks and ambushes against government forces


The slogans were a strange mixture of Islamic fundamentalism with American-style "freedom".


But American "freedom" does not fit into Middle-Eastern societies, where the constraints mostly come from the family.

Most Syrians looked through the scheme, as was clear from the large pro-Assad demonstrations in the summer of 2011.


By the Summer, demonstrations had shrunk to a few hundred, after which they proclaimed open violence.


After a visit to Turkey by CIA Director David Petraeus in July, the "Free Syrian Army" was proclaimed - which quickly made a reputation for crimes against civilians

notably in Homs, where abductions and killings ran in the hundreds.


During the Autumn, the US made constant demands for Assad to "step down".

Simultaneously, the "rebels" stepped up the violence, and the US organized transfers of arms and men from Libya.