#copsoffcampus protest attacked by police, with yet another mass arrest

In the latest of a series of mass arrests, (the data-mining and extra-judicial punishment tactic recently favoured by the Met), around 36 people were arrested at the student #copsoffcampus protest this afternoon. Almost all the arrests were for ‘breach of the peace’, and many are being released in the small hours from far-flung police stations in Bromley, Croydon and even Sutton. 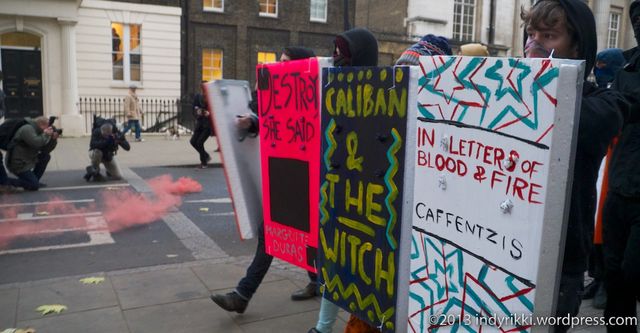 On the 27th September, ULU vice-president, Daniel Cooper, was arrested after he tried to intervene in what he believed was a racially-motivated stop-and-search. This was followed on 14th November, by the arrest of ULU’s president, Michael Chessum, simply for organising a protest against the closure of ULU.

Other recent incidents include the arrival of 16 police to arrest a young woman who had chalked a slogan in support of the ‘3Cosas’ campaign for better working conditions for University cleaners – she was also strip-searched in that arrest. Peaceful student lunchtime protests have also seen heavy policing in the last few weeks.

As a result, and supported by a UCLU council vote last month, today’s #copsoffcampus protest was called.

But even this week, there were more incidents. In Sussex, an occupation in solidarity with strikes in higher education led to the suspension of five students. Last night, a peaceful student occupation of Senate House was brutally evicted by university security and large numbers of riot police. Footage has emerged supporting student accounts of unwarranted violent and unacceptable behaviour by police last night.

At 3pm this afternoon, the start point in Malet Street was surprisingly quiet, but over the next half hour, numbers built, and after a short welcoming announcement, a decision was made by a group of around 150 students to march to Senate House. Eerily, although the protest had been well circulated on social media, there were apparently no police present.

However, in the same way that three years ago during the cuts protests, students were led into traps designed to provoke angry reaction and then apparently justify police violence, I suspect a similar tactic was attempted by the authorities today.
The doors to Senate House were of course locked shut. Through a window could be seen a TSG unit hiding behind the door. The protest moved on into Russell Square, led by a ‘book bloc’ – students holding defensive polystyrene shields painted to look like the covers of various mainly radical books (including Blackstone’s Police Public Order Manual!)

At the Stewart House entrance in Russell Square, copies of injunctions (granted to the university authorities this morning) outlawing any occupation protests, were taped to the railings. Behind the locked gates stood a few police. As the crowd rattled the gates, batons were inexplicably drawn, and then suddenly, eleven riot squad vans, sirens blazing, hurtled into the square from the east.

This was clearly a carefully planned and major operation, but despite the huge numbers of police available, just half a dozen began pushing through the crowd, aggressively beating a path to the gates and standing in front. Well, hey ho, the crowd reacted predictably, shouting at the cops, surrounding and taunting them, with a couple of minor scuffles.

Meanwhile, another group of just 5 or 6 police pushed their way into the crowd in front of the vans. They were similarly surrounded, drew batons and lashed out at the defensive ‘book bloc’.

These two minor and wholly voidable skirmishes then gave the excuse for the police to deploy large numbers, who then surged forwards, forming cordons and pushing people away from the gates. The students however, didn’t rise to the violent bait, and quickly led the way back onto the campus in front of the SOAS building, barricading the entrance with wheelie bins.

At that point, a shower of torrential rain literally dampened down the situation, and the group diminished as people sought shelter. But as the rain eased, the students headed through the campus and back out into Malet Street where they had begun.

There again a tiny number of police appeared to purposely provoke the protesters by pushing their way uninvited into the crowd. This led to a small scuffle, and so suddenly around dozens and dozens of police appeared, running and shouting aggressively, and the crowd quickly began to move north.

As police regrouped, around 100 protestors continued up past the Bloomsbury Theatre on to the Euston Road, where they began a peaceful march westward. Some police ran past the group and formed a cordon to stop people entering the Euston underpass.

So the protest began to march down Gower Street, but at that point large numbers of police had again caught up, and running amongst the crowd they trapped people into two containment areas, in front of the hospital and next to Euston Square tube station.

More than half the students had managed to get away, but as news of the containment spread, people began to reconvene in this area, along with the massive police presence.

There were a couple of snatch arrests, and other incidents. One student on crutches was, according to an eye-witness, attacked and then arrested by police. In one of the arrests, as several burly cops shoved a slender student to the ground, I heard the loud thud of his head hitting the pavement. A police ‘bubble’ formed around the incident, and there were some scuffles as people tried to help, or at least see if the man was conscious. He was removed, behind a wall of police, to a waiting van, leaving a pool of blood on the paving.

Over the next couple of hours, people were brought out of the ‘kettles’ one by one, filmed by a Forward Intelligence photographer, and taken away in vans. Police claimed that most of the arrests were “in order to prevent a breach of the peace”, with some under “suspicion of affray”, and two alleged “assaulting a police officer”.

Among those caught in the kettles were legal observers, at least one journalist, Owen Webb the editor of the ‘London Student’ newspaper, and one of the founders of the police monitoring group, Netpol, who was one of the last people arrested, surrounded by dozens of TSG and roughly man-handled into the van.

Mass arrests appear to be a new technique used by police to collect data and chill protest. ‘Breach of the peace’ arrests normally remove alleged trouble-makers from a scene, dump them at a nearby police station, and then release them as soon as possible afterwards (as the breach is clearly no longer imminent). And yet, today’s arrestees were taken as far as Croydon, Bromley, and even Sutton, and at 1am tonight the first releases are just being reported, with bail conditions banning students from Senate House and other University buildings. This is nasty extra-judicial punishment simply for taking part in protest.

London students are calling for another protest in Malet Street at 3pm tomorrow Friday, and there was also an announcement of a national protest at 2pm next Tuesday.

Green and Black Cross legal team are calling out for witnesses to any arrests or any of the assaults that took place today.

Today in his Autumn statement, George Osborne slipped in the news that the student loan book will be sold off to the private sector, opening the way for more broken promises.