Hundreds of local residents at Cat Hill, protesting against the demolition of Middlesex University and five acres of ponds and woodlands with hundreds of 400-year-old oak trees and protected endangered species like bats, great crested newts, and dormice, are preparing to occupy the site and blockade the developers to stop them from destroying one of the finest and most beautiful natural wildlife habitats in Britain. 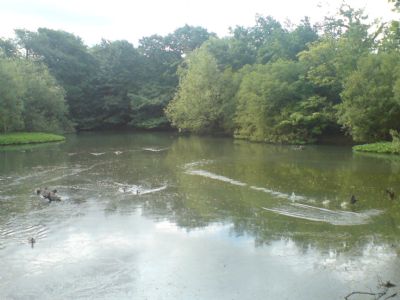 Some of the local grannies and grandads are planning to follow in the tradition of the older generation at Bexhill and Balcombe and Barton Moss who have occupied the trees and the anti-fracking blockades and have told the newspapers and the television that they are fighting for their grandchildren's future survival on the earth which is being destroyed by the corporations, the banks, and the government.

The local residents' campaign group at Cat Hill is praying for a miracle and they are planning to lend their support to the protesters in any way they can by providing hot drinks, soup, and food at a support base close to the site.
Veteran eco-warriors from all over Britain are being asked to help the local campaign by digging tunnels and building tree houses and helping to resist the destruction of the ponds and the woodland which could start at any time.

The strategy for the protest site will be to occupy the whole area as a squat and have a rolling blockade which means continuous occupation with many of the local residents taking turns to come and go to maintain a presence 24 hours a day
so that the developers will have to take them the courts to get a possession order to evict them, and they plan to continue their protest for as long as it takes to defeat the developers and Enfield council.

All the national newspapers and the television channels will be alerted to the local residents' protest at Cat Hill as soon as it starts to help bring in more protesters from across the country and also to help provide protection in case the owners attempt to get violent with them.

4000 local residents have been campaigning for years against the demolition of Middlesex University and the plans to cut down hundreds of ancient trees to build hundreds of new dwellings in violation of the covenant that the land must be used only for educational purposes in perpetuity.

The Middlesex University protest site is at Cat Hill in the East Barnet/Cockfosters area of north London/Middlesex, beside the roundabout junction of the A110 and the A111 and it is on bus route 307.
Get off at Chicken Shed and cross the road.
You can't miss it.
Everyone welcome.
LET'S CREATE THE SCHOOL FOR ECO-WARRIORS AT MIDDLESEX UNIVERSITY!
Cat Hill Protest on Facebook.
Cat Hill Protest (cathillprotest) on Twitter.