Please contact the Spanish, Mexican, Argentinian and other Hispanic population embassies to end the archaic savagery of bullfighting. 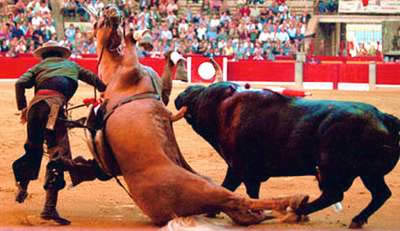 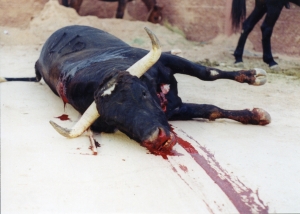 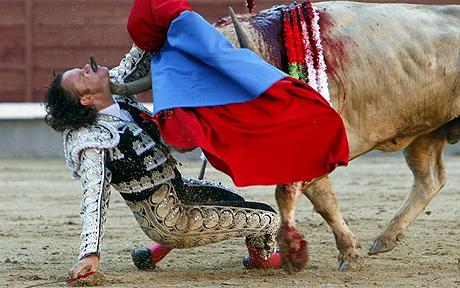 Matadors Find Violence Returns to Them 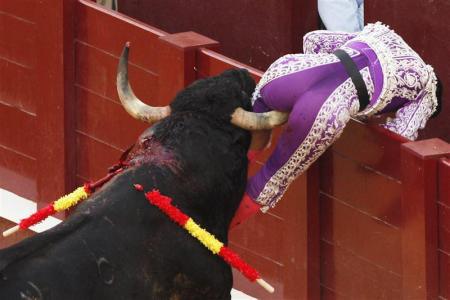 They paid to witness inflicting of pain on an innocent animal. Angels gave them a taste
of what their money does to the bull.

A bullfighter who had murdered many bulls
was gored ... the horn coming out of his mouth

The bullfighter who tried to murder the bull
was himself injured... those who live by the sword
are often injured by the sword

Bullfighting is a savage blood sport, an archaic barbarism which injures innocent bulls, horses, bullfighters and spectators. It is time for the Spanish government to outlaw it

throughout Spain as has been done in Barcelona. It is time for the entire Hispanic world to end this public spectacle of savagery.

What is a picador... ? a sadist who deliberately goads the bull with a sharp lance

The following text is from PETA

Each year, approximately 10,000 bulls die in bullfights, an inaccurate term for events in which there is very little competition between a nimble, sword-wielding matador (Spanish for “killer”) and a confused, maimed, psychologically tormented, and physically debilitated animal.(1) According to one matador, some of the top performers may “ask breeders to deliberately select placid bulls …. It’s the only way to sustain your energy for the duration of the season.”(2)

Ritualistic Slaughter
Most bullfights are divided into three parts. First, a bull is forced into the arena and taunted by a matador with a cape.(3) The bull is then approached by picadors (men on horses), who drive lances into the bull’s back and neck muscles, impairing the bull’s ability to lift his head. They twist and gouge the lances to ensure a significant amount of blood loss.(4) Then come the banderilleros on foot, who proceed to distract and dart around the bull while stabbing the animal with brightly colored darts called banderillas.(5) After blood loss has weakened the bull, the banderilleros run the bull in more circles until he becomes dizzy and stops chasing. In the final act, the matador appears. After using his cape and sword (the faena) to provoke a few exhausted charges from the dying animal, the matador tries to deliver the death blow, or estocada, with his sword.(6) If he misses, succeeding only in further mutilation, an executioner is called in to stab the exhausted animal to death. If the crowd is happy with the matador, the bull’s ears and tail or a hoof may be cut off and presented as a gift.(7)

A few minutes later, another bull enters the arena and the sadistic cycle starts again.

Opposition to Bullfighting
Pope St. Pius V decreed that “spectacles” such as bullfights are “removed from Christian piety and charity.” He wished that “these cruel and base spectacles of the devil and not of man” be abolished and he forbade attendance at them under penalty of excommunication.(8)

Barcelona has declared itself “an anti-bullfighting city,” and 38 Catalan municipalities have followed its lead; the last bullring in Barcelona closed in 2006 because of poor attendance.(9) As of January 2012, Catalonia becomes the first Spanish mainland region to officially ban bullfighting, although the final bullfight occurred there in September of 2011 when the “season” ended.(10,11)

According to a 2006 Gallup survey, 72 percent of Spaniards show no interest in bullfights, up from 31 percent in the 1990s.(12) Interest in bullfighting has also declined in Mexico and Portugal, and according to one report, officials in Beijing, China, decided not to build a bullring at a popular tourist destination for “fears of the country’s image.”(13) Unfortunately, there are still more than 1,200 government-funded bull ranches and dozens of state-sponsored bullfighting schools in Spain.(14) In France, bullfights are held in the cities of Nîmes, Arles, Dax, Toulouse, and Bayonne.(15)

What You Can Do
If you are planning to visit a country that permits bullfighting, please tell your travel agent that you are opposed to cruelty to animals in any form and that you do not want tickets to bullfights included in any tour packages. Before vacationing abroad, you can write to the country’s ambassador and ask whether rituals involving animal slaughter are among the country’s tourist attractions. Make it clear that you want no part in such activities, and never be afraid to talk about the cruelty of bullfighting.

Please write to the Spanish, Mexican, and French embassies and explain that as long as this cruel blood sport continues, you will never visit these countries.


Each year, thousands of bulls are barbarically slaughtered in bullrings around the world. From the moment they enter the ring, the bulls don’t stand a chance. They may be weakened by beatings, have their horns shaved to keep them off balance, or have petroleum jelly rubbed into their eyes to impair their vision.

In a typical Spanish bullfight, the bull enters the arena and is approached by picadors—men on horses who drive lances into the bull’s back and neck muscles. This attack impairs the bull’s ability to lift his head and defend himself. They twist and gouge the lances to ensure significant blood loss.

Then banderilleros enter on foot, distract the bull, and dart around him while plunging banderillas—brightly colored sticks with harpoon points on their ends—into his back. When the bull has become weakened from blood loss, the banderilleros run the bull in circles until he becomes dizzy and stops chasing them.

Finally, the matador appears and, after provoking a few exhausted charges from the dying animal, tries to kill the bull with his sword. If he misses, succeeding only in further mutilating the animal, an executioner is called in to stab the exhausted and submissive bull to death. The dagger is supposed to cut the animal’s spinal cord, but even this stroke can be blundered, leaving the bull conscious but paralyzed as he is chained by his horns and dragged out of the arena.

If the crowd is happy with the matador, the bull’s ears and tail are cut off and presented as trophies. A few minutes later, another bull enters the arena and the sadistic cycle starts again.

The Running of the Bulls

Most tourists don’t know that all the bulls who run in the streets of Pamplona, Spain, are later killed in the bullring. Before the runs, the bulls are kept in crowded, dark enclosures, and when they are prodded onto the streets, they are momentarily blinded by the sunlight. Runners hit them with rolled-up newspapers. The panicked animals can lose their footing on corners and crash into walls, possibly breaking bones or otherwise injuring themselves. They will be stabbed to death at the end of each day.

Around the world, opposition to bullfighting is growing. In July 2010, Catalonia’s Parliament banned bullfighting, and in May 2013, the Mexican state of Sonora did the same. In October 2013, France’s Green Party introduced a proposal to ban killing bulls. In 2011, Ecuador banned killing animals for entertainment. After Portugal’s municipality of Viana do Castelo banned bullfighting in 2009, the city’s mayor said, “The defence of animal rights is not compatible with spectacles that torture and impose unjustifiable suffering.” From 2008 to 2013, attendance in Spanish arenas fell by 40 percent. In 2008, about 3,300 bullfights were held in Spain. In 2012, they dropped to less than 2,000, and in 2013, it’s expected that less than 500 bullfights will be held.

Despite the name, Portuguese bullfights are anything but bloodless. The bull is stabbed with banderillas by a matador on horseback, causing deep wounds and significant blood loss. The bull is then tormented by eight forcados, seven of whom grab the animal’s head while the eighth pulls on his tail, eventually stopping the exhausted animal. The bull is not killed in the ring but dragged out and left bleeding to await his slaughter, hours or even days later.

Bulls aren’t the only victims in bullfights. Horses are used to run bulls in circles, are viciously spurred, and can quickly become exhausted. Horses can be seriously gored or killed by charging bulls trying to protect themselves. They’re also forced to pull the bulls’ dead bodies out of the ring.