When a jury asked if it was the U.K soldiers who were the terrorists, instead of a young lawyer on trial, as a terrorist [for "glorifying terrorism" !!] the Judiciary refused to address the legality of the U.K wars of aggression. 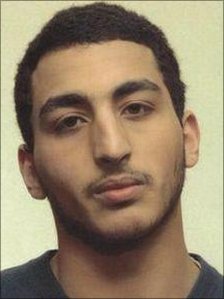 
A U.K Jury asked a Judge if U.K soldiers are terrorists.


When a jury asked if it was the U.K soldiers who were the terrorists, instead of a young lawyer on trial, as a terrorist [for "glorifying terrorism" !!] the Judiciary refused to address the legality of the U.K wars of aggression.

Instead the Judge illegally directed the jury to convict the lawyer as the terrorist.

The government mouthpiece, the BBC, who are well known for glorifying state terrorism, peddled the lie, the lawyer was the terrorist.


The recent -non- ruling on the legality of war, by the U.K Supreme Court, would make even Hitler blush.

The people are so real and so human.

It was not the student lawyer on trial who was the terrorist, which is what the media, courts and government would have people think.

The fact is, it is the U.K State, (along with others) who are the terrorists. The war criminals. The mass murderers.

This is why the U.K State do not want the people anywhere inside courts in any capacity, other than "defendants".

The recent U.K State ruling would be like saying Syrian Christians could not stand up to defend themselves in Syria right now, because they were being attacked by western backed terrorists.

A Syrian Bishop quite properly and lawfully states that Christians should use reasonable force to defend Syria and it's people.

The Syrian Archbishop speaks about about the unprecedented use of western backed -terrorists- in Syria.


In the U.S the people have the right to bear arms.

In Syria, the civilians have the right to bear arms. Indeed many would say it is a duty, which can only help their own soldiers.

The U.K are also at war with the Syrian people.

It is widely known that U.K Supreme Courts assertion that “following orders” is okay, is not a legal defense to criminal acts.

Wars of aggression are the most serious criminal acts there can be.

So the U.K Courts are seen to have illegally refused, to address the question of the legality of their own wars, which include their war in Syria.

2.  "Re: definition of terrorism in [section 1 of the 2000 Act], would the use of force by Coalition forces be classed as terrorism?

"  In relation to that question, the judge gave the following direction: "… the use of force by Coalition forces is not terrorism.

They do enjoy combat immunity, they are ordered there by our government and the American government, unless they commit crimes such as torture or war crimes …".

3. Later the same day, the jury asked a further question, which was in these terms:

"  The judge answered this question, after hearing submissions from counsel, in these terms: "I have to apply the Terrorism Act and the definition of terrorism which is part of English law, and the answer is 'yes, it would'. But it is ultimately for you to say."

5. The jury then proceeded to convict the appellant on five of the six counts. The count on which he was acquitted related to a video which contained footage concerning the Israeli-Palestinian conflict in Gaza.

The judge directed the jury that, if Israel was involved in an incursion into Gaza which involved attacks on civilians, schools, hospitals and ambulances, and all that the appellant was encouraging was resistance to these attacks, the prosecution did not seek a conviction.

The present appeal proceeded without considering whether, as a matter of law, the stance adopted by the prosecution was correct, and we do not propose to address it further.

The judge sentenced the appellant to five years' imprisonment, with appropriate allowance for time spent on remand.

This is because when you stick with law..

Except that there is a defense, of using "reasonable force" in self-defense.

You can see -why- the U.K State get very nervous with the people, in courts of...law.

The people will do law, whereas the criminal state invent fraudulent legislative acts, so the state effectively sits as judge, jury and executioner in their own trials, to cover up their own criminal acts.

I sincerely hope that the many - utterly - disgraceful members of the U.K Judiciary (including those in this case) who have been involved in facilitating the most horrendous war crimes, live very long lives, so that the people can witness them stand trial, like the Nazis.

Their own "rulings" stand as -evidence- of their complicity in many war crimes.
This case highlights the importance of the people, pursuing the U.K State over...law, because it is the U.K State, who the people have on the run, over their illegal wars of aggression which have led to the brutal murder of millions of innocent civilians.