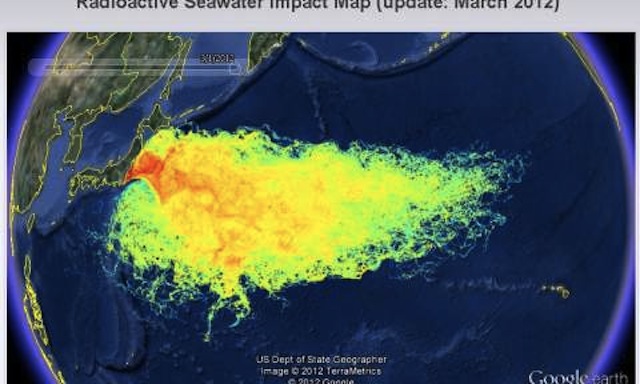 Map Of The Most Irradiated Seawaters

The nuclear plants everywhere are ticking time bombs. Three Mile Island in the US,
Chernobyl in Russia, atom bombs exploded by France, the US and others have all
added to the lethal radiation levels of the world. The Bush regime gave Baghdad
a depleted uranium level 81 times the world's average. Because of the poisonpour,
the flesh of all ocean fishes, shellfish, whales, octopi, etc. is becoming more lethal
daily. For decades, coastal countries consuming the most fish have had the most cancer but the problem is multiplying now.

Fish cannot scream.
Greed for suffocated fish flesh causes seals to be clubbed in Canada,
dolphins to be knifed in Japan, whales to be murdered by
Norwegian Japanese Icelandic and American Inuit fishermen, bears
to be murdered in Alaska.**

Are all anglers stranglers? No.. some are smashers.

Dick Gregory: Eating fish liver oil is like eating the filter out of a
car.

I
MERCURY AND OTHER TOXIC METALS HARM BRAIN

In reality the high mercury levels in fish cause memory and mental function loss.
"Symptoms of amnesic shellfish poisoning include possible permanent short-term memory loss." * The cultures eating the most fish (Inuit) have the lowest life expectancy of
any group surviving to adulthood, while the Japanese who eat high amounts of fish have as their number 1 cause of death fish correlated stomach cancer. Toxins in fish include selenium, chromium, lead, arsenic, pcb's, pbb's, pvc's
and every other nonbiodegradable toxin which is 100 to 1000 times more concentrated in the flesh of fish than in the water. (Rachel Carson's The Silent Spring dealt with among other things the massive loss of bird and fish
life from DDT. Fish is the antibrain food as fruitarian and vegetarian
geniuses DaVinci, Einstein, Ramanujan, Mary Shelley and
others can attest. Linus Pauling, only person to win a Nobel Prize both for peace and his discovery of 6
elements, has written that an orthmolecule is a fruit
molecule. They are the most similar to the neural
transmitters in the brain. There is no vitamin C (speeds flow
of nerve signals across synapses) in fish or animal flesh
or in animal products.) The EPA issued 3500 warnings against fish consumption in one year alone. Arsenic poisoning (arsenic from the oceans is concentrated in the
flesh of fishes) creates lesions and warts on the hands.
II
PROSTATE UTERINE AND BREAST CANCER FROM FISH

The female hormones correlated to skyrocketing rates of
prostate, uterine and breast cancer in the US come from
injections or 'medications' given to cows, sheep pigs
chickens etc. The urine from these factory farmed animals
is dumped into the waterways causing fish to have
cancerous growths. If they are eaten by humans before
they die they can cause cancer in human beings, just as
a chicken can transmit leukemia (though the multi trillion
dollar chicken industry calls leukemia leukosis when they
don't manage to hide chicken cancer altogether.)
III
STOMACH CANCER

Fish flesh can cause food poisoning (ptomaine, brucellosis,
toxoplasmosis, salmonella,
ecoli). Anaphylactic shock frequently causes death to those who
eat shellfish. It is universally known that dead fish stink (as
do all cadavers). Choking on fish bones has been common throughout the
centuries.

The Texas Dept. of Health stated in one year that 245 people had been victims
of
illness from oysters in Galveston Bay. The bacterium is Vibrio
parahaemolyticus. 208 people have had oyster illness in the Northwest.

U.S. News and World Report Nov 24, 1997: One of the strains
causing
food poisoning in shellfish is Vibria Vulnificus.

There is no natural bulk in fish. It is naturally constipating.
VI
KIDNEY PROBLEMS

The ketosis from high animal protein diets leads not only
to bleeding ulcers but to kidney shutdown and blocked urethras.
VII
PISCEAN SPONGIFORM ENCEPHALITIS OR MAD FISH DISEASE

In addition is the emerging truth of piscean spongiform encephalopathy or Mad Fish Disease as both
factory farmed and ocean fish are eating the parts of other animals.
VIII
HEART DISEASE AND ARTHRITIS
The uric acid in fish is trioxypurine, more powerful than caffein, and is correlated to arthritis as it crystallizes in needle formation around the joints. It also
adds to the incidence of heart disease and stroke, stimulating the
heart unnaturally.

VIII B ADDICTION
The uric acid or trioxypurine like caffein or dioxypurine
is addictive, and since there are more oxypurines than in
coffee, it is more addictive.

"If you miss fish or meat, take out a veggieburger and whiz
on it."

IX
WORMS.
Owen Parrett, MD wrote that even Rocky Mountain trout from the most
unpolluted streams
have worms while

X HEPATITIS
The coprophagous (human and other waste eating) habits
of shellfish
are the number 2 (yes) cause of hepatitis.

Commercial fishing causes more fatalities annually than
any other occupation, through sudden storm drownings,
through problems with pulleys, ropes, nets, sails,
through spiking and other injuries from fishes gasping
for their breath and fighting for their lives. Noncommercial
fishermen have died when lightning turned their metal poles
into lightning rods.

Choking on meat or fish is the 6th cause of accidental death in the
US. So common has it been to choke on fish bones that the Catholic
Church has a feastday dedicated to St. Blaize in which throats
are blessed. Fraternity house pranks in the cruel blood sport
of goldfish swallowing have resulted in deaths to humans
as well as the fish.

A radio network caller, Oct 27, 97: "My mother never got to see the same military MD twice, so it was years before medical detectives realized that her
Saturday headaches were caused by her Friday fisheating with an
allergy
to iodine.
XIV
FISH DISEASES

NPR November 6, 1997: Dr. James Porter of the Univ. of Athens at
Georgia was studying the many new fishes diseases such as black band and white pox. He reported that increased shipping, increased pollution,
and overfishing (an oxymoron since all fishing is overfishing) are factors for the rise.
XV
OXYMORONS: FRESH FISH AND OVERFISHING

With asbestos in Lake Michigan, pcb's in the livers of polar bears
in Alaska, oyster contamination in the Gulf from the runoff of
the Mississippi, lipophilic insecticides in Lake Erie, pfiesteria
in the Atlantic seaboard ..arsenic, chromium and mercury, pcb's,
insecticides, fish killing old oil and every other toxin in the
oceans,
shellfish in the NE
eating unprocessed human waste, where is there fresh fish?
The UN FAO, Prince Philip, and government and private
coalitions around the world are working to reduce fishing
so as not to wipe out certain species.

There are trillions of gallons of fish oil slop on trawler and
processing floors.

Harvard whose corporate funded studies were a factor in Stanley
Prusiner's (prion discoverer) leaving for California is also promoting
the glut of fish on the market.

States like Maryland which subsidize fishing promotion
are violating the first amendment rights of Buddhists, Hindus,
vegetarians, vegans, Seventh Day Adventists, Jains, and
many other religions which teach not killing.
The sale of fish brings 54 million to the state of Maryland, whose
governor prevailed on 3 chains in the Washington area to
begin again to sell Chesapeake fish despite the pfiesteria disease
caused by untold trillions of gallons of pig factory farm
sewage being dumped into the Atlantic.
One factor of many in the disease of the fish might be the Calvert
Cliffs nuclear power plant, which raises the temperature of the water
in the area.

Seals and whales are killed by Canadians Norwegians and Japanese
because they
compete for fish. Penguin babies can die because there
are no longer enough fish for them to eat.

Dolphins, turtles and other sea creatures are
caught in the nets.

Whales are caught in lobster lines.

Manatee and all forenamed creatures are caught in boat propellers.

Those who promote fisheating incur the karma not only of the
suffocated fish (problems of breath) but the karma of the seals,
whales,
dolphins, turtles, octopi and all other sea beings killed by the
fishing industry or individuals.

A Hindu ashram not in accord with the Bhagavad Gita's
dietary nonviolence
was inundated by the perhaps military machine generated tsunami.

Dr Donald Broom, science adviser to the British government, has said that the pain
system in fish is the same as for mammals and humans.

Any child who sees a fish flopping on the deck, or struggling for life on a hook,
or impaled in the eye by a flyfisher knows that fishes fill pain.

What's worse than a snakeoil salesman? A pawn of fishmongers.

A vanguard of holistic veterinarians, and James A Peden,
author of VEGETARIAN CATS AND DOGS, which is in its third printing, are
working to help petowners transition their cats to nonharmful foods, ones
which do not cause urethra blockages, feline leukemia, kidney dysfunction or
food poisoning. Andrew Knight DVM has written of a litany
of toxins in commercial pet food.

ANTI FISHING ORGANIZATION WEBSITES INCLUDE ALL VEGETARIAN
AND VEGAN WEBSITES

http://news.adventist.org/data/2001/06/0995375716/index.html.en
Adventists longest lived community in US.. Ellen White said to be vegan
Mervyn Hardinge, MD (left Harvard as did Stanley Prusiner)
(Harvard is invested in slaughterhouses and its research
is pawn to its investments)
Hardinge wrote Non Flesh Dietaries, his study of fruitarians, vegans,
vegetarians and animal eaters for the Journal of the ADA (a dairy
dominated lobby)
Stanley Prusiner, PhD discoverer of prions or Mad Cow and
other spongiform encephalopathies
Joan Ullyot MD of San Francisco sports medicine
Linus Pauling, PhD Winner of 2 Nobel Prizes.. one in biochemistry
and one for peace... said fruitarian diet is the diet which
generated neural transmitters of human beings

Diet and Nutrition; Rudolf Ballantine, MD.
Diseases Of Food Animals Owen Parrett MD
Foods That Cause You to Lose Weight: The Negative Calorie Effect more books like this
by Barnard, Neal MD (Dr Barnard has written over a dozen books)
EyeCare Sourcebook by Jay Lavine MD

http://www.drlavine.org
(some of his articles are free on the internet)

http://www.geocities.com/athens/agora/7732/meat.html Owen Parrett
MD author of Diseases Of Food Animals on why he does not eat meat

------
both Oregon State and the
Seventh Day Adventist Hospitals
are inflicting pain on animals.
Dr Pauling would not want
his Nobel winning work contaminated
by animal torture.

*
(Generally, the CDC has been the tool of multinational
pharmaceutical drug pushers and has stifled information
about the toxic effects of meat, fish, and animal products.
However paragraphs from a CDC article from the cdc.gov webpage are
informative.)

The average dolphin lifespan were their fins and bodies not
maimed by propellers, were they not suffocated in fishing nets
or knifed by Japanese fishermen nor poisoned by pollution
would be 75 years.

A dolphin photographer as he was scuba diving saw 3 dolphins herd a shark away from him.

The Japanese continue to murder untold tens of thousands of dolphins yearly, with knives and other methods, considering them competitors for fish.

The pollutants of the world have filled the sea with so many pcb's,pbb's, so much arsenic, chromium, mercury, nuclear waste, etc. that in some cases marine mammal milk has become contaminated.

Unknown author quoted by James Michener in the book Chesapeake

'The fisher also shall mourn and all they that cast angle into the brook shall lament and they that spread nets upon the waters shall languish."

In Jan of 2013 Mother Jones did the following article