Mark Duggan - my report on yesterday's vigil in Tottenham

More than a thousand people stood in peaceful solidarity with the Duggan family outside Tottenham Police Station yesterday afternoon. Speakers from families of just a handful of the 1400 deaths in custody since 1990 told over and over how the authorities close ranks and deny justice, and the media smear and misinform. 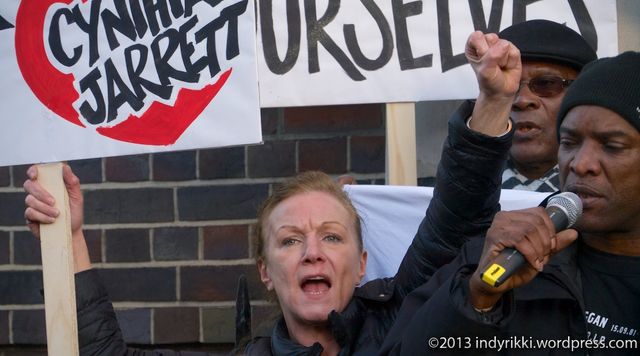 
Since 1990, more than 1400 people have died at the hands of the police. Despite several attempted private prosecutions, no police officer has ever been convicted in connection with these hundreds of deaths. And in that time, only 10 inquests or inquiries have even resulted in 'unlawful killing' verdicts.

During the inquest into Mark Duggan's killing at the hands of the police, there emerged serious inconsistencies, and as new evidence cast doubt on previous statements, officers were recalled to reflect on and then even change their sworn testimonies.

On 6th Feb, a police officer may face jail as he is sentenced for misconduct in public office. Seven more metropolitan police officers are expecting disciplinary action, with four of them facing gross misconduct hearings in March. The Prime Minister, David Cameron, has issued a statement that "It is completely unacceptable for a serving police officer to falsify an account of any incident".

Unfortunately, this unusual public display of justice and indignation wasn't about false statements over the death of a young black man, but over whether a middle-aged, white, mouthy and arrogant MP did or didn't use the word 'pleb' while swearing at diplomatic police outside Downing Street. Meanwhile, the police have launched a judicial review to challenge the decision by the IPCC to re-investigate the conduct of three other officers involved in the cover-up. So business as usual there, as they continue to close ranks and protect their own.

In this context, yesterday's vigil outside Tottenham police station was not just about Mark Duggan.

14th January was also the 15th anniversary of Roger Sylvester's "unlawful killing" at the hands of police, in yet another case where the authorities issued false statements to an eager press who were all too willing to smear the victim - forensic pathologist Dr. Freddy Patel leaked medical information suggesting that Roger was a crack cocaine user - never substantiated. Despite later receiving a General Medical Council reprimand for this, Dr. Patel continued his career, and went on to conduct several questionable autopsies for the police and Home Office before they apparently ended his contract relating to suspicious deaths. Then mysteriously, he was selected by the coroner to conduct Ian Tomlinson's autopsy, before finally being struck off after he was found to have disposed of key evidence in that case.

Rodney's father was among the many grieving speakers at yesterday's peaceful and dignified gathering. He spoke about how the police appealed against the decision, on the basis that the jury had been "confused". Mark Duggan's family certainly believe the jury was confused in reaching their "perverse" finding at his inquest and are hoping to launch a judicial review.

Another of the speakers yesterday was Stephanie Lightfoot-Bennet, whose twin brother Leon Patterson died at the hands of Manchester police in 1992. She told how the first inquest was abandoned after she discovered the custody sergeant's wife was on the jury, the second reached a decision of unlawful killing, but a third inquest, despite an admission by a toxicologist that he had fabricated evidence to support a police statement, then found that Leon's death was caused by 'hypomania'.

Friends and family members also reminded the crowd about Joy Gardiner, killed by police in 1993, and Leon Briggs, who died at Luton police station last November, and a representative of the United Friends and Families campaign group held up the list of 3120 names of people who have died in police custody since 1969.

Marcia Rigg, sister of Sean Rigg (killed in Brixton in 2008), gave some hope to the Duggans, telling them never to give up, as her family have just recently been told that the criminal investigation into Sean's death will be reopened.

Becky Shah, from the Hillsborough Campaign, offered solidarity and spoke about how the police had lied and fabricated evidence about members of her family, killed at the football stadium, and again mentioned mainstream media collusion and the public smearing of victims.

A speaker on behalf of the Kurdish-Turkish community told of 11,000 deaths in Turkey, and the corruption, cover-ups, and lies that obstruct justice for his people there, offering a hand of friendship and solidarity to the Duggan family in their struggle against powerful interests.

The whole afternoon was gently "compered" by Stafford Stott, who began by introducing Mark's aunt, Carole Duggan. She thanked the bravery of the independent witnesses who had come forward with credible testimony that Mark was standing with his arms in the air, clearly holding a Blackberry phone, when he was executed by police. She berated the media for their sustained campaign of misinformation and smears, telling the crowd that the Duggan's were not a gangster family as portrayed. And she called for people to come together and support each other to make a better life for our children.

Reverend Nims Obunge (who officiated at Mark's funeral) ended proceedings with a plea for justice, peace, and truth, noting that it was clear that someone was lying about Duggan's death, but also asking the Tottenham community to seek justice and peace among themselves, speaking out against gang crime, and youth-on-youth violence and killings. He then facilitated friends and families in the symbolic release of white doves, and introduced Mark's mother, Pamela, to say a few final words, before calling for a peaceful end to the vigil.

The press were there of course in large numbers, but the family asked them to respect the nature of the vigil and to remain in a packed 'press pen'. There was open animosity towards them from some people in the crowd. Police were there too, with intelligence units in their numbers, a couple of "Police Liaison Officers" fully wired for sound, and a very rare street appearance of a Police Commander.

Over the course of the afternoon numbers swelled to over a thousand, and it was great to see a very mixed crowd showing solidarity with the family. One noteable absence was the local Labour MP, David Lammy, who despite being invited by the Duggan's, excused himself on the basis he didn't want to share a platform with "anarchists". I don't think that comment will have endeared him to many of his voters.