The revolte 2013 in brazil, repression and the struggle for an ongoing movement

Grown on the increasing social unjustice in the brazilian society, this june and july saw brazilians strongest and most ongoing spontaneous uprising and grassroot-movement in history against the current structures and conditions. One of the promoters for the growing of the protests was thereby the violent police forces, that showed even to middle-class protesting people, how the state protects against changes. 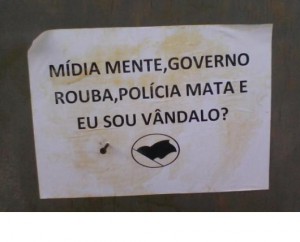 “the media lies, the government robs, the police kills and i am a vandalist?” 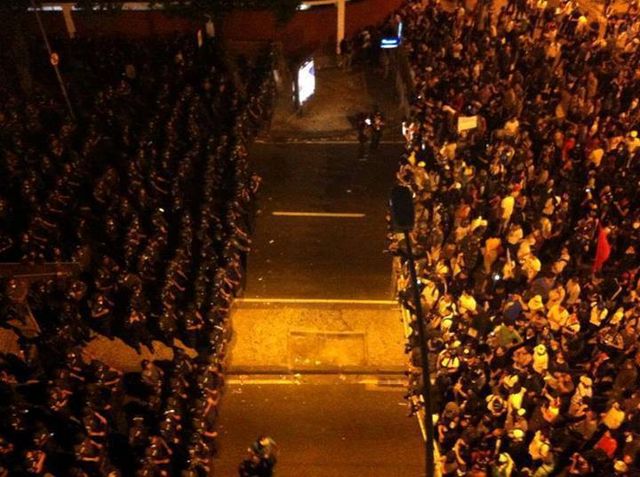 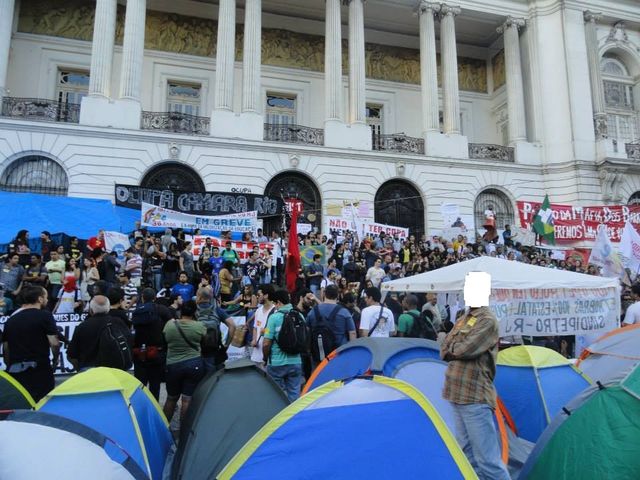 the camp on camara square in Rio 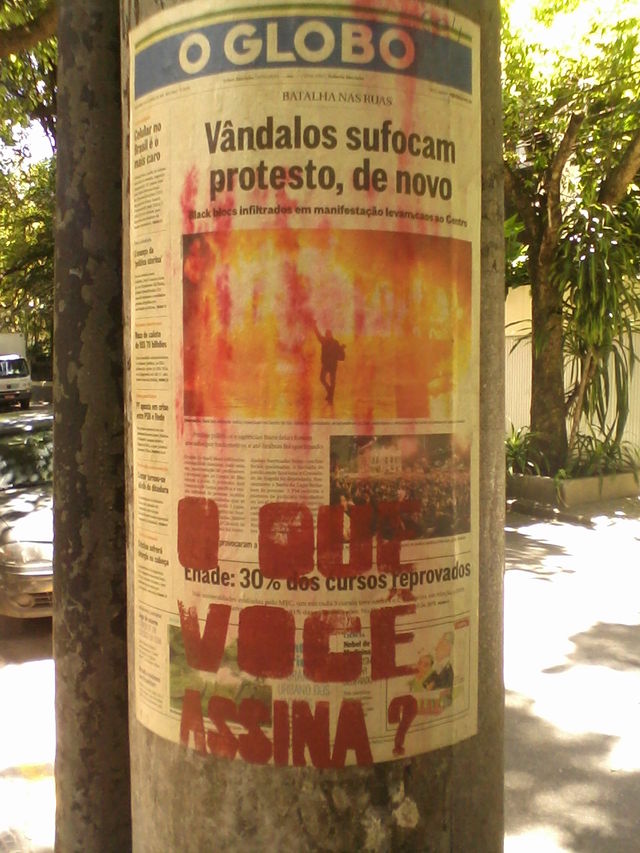 “whom do you stand for?” poster against lies of globo 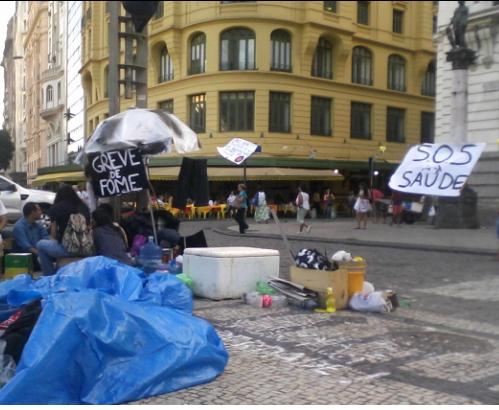 The initial demand of free transport and mobility in são paulo was not the limit of reasons for people to gather and resist. Activists and anarchists from brazil told us this november about how this topic was quickly enlarged and enlarging to wider social questions like the health system, the education and the increasing of labour-leasing.

The forthcoming Worldcup and Olympics in 2014 and 2016 and the “pacification” of the favelas with a new police force called “Unidade Polícia Pacificadora” (UPP) since 2008 strengthen the tensions in Rio de Janeiro, as it is obviouse, who will win and who will loose freedoms. Their official intention is to shift with the gangs to get control over the favelas and therefor attack. If this is in any way a benefit for the inhabitants, nobody asks them. But even left-oriented international newspapers (like the german taz) wrote positive about the UPP, as for white people, foreigners and the ones with money the streets get easier accessible in the city. But as it is not in any way a system to benefit the poor, the price is a gigantic surveillance of the favelas and its inhabitants via cops and in fact the police is ruling and participating more intensive as befor in keeping the poorness and violence. The next months will fasten things up, as the citys governor Cabral even said in public, which is recorded, “through the world-cup and the olympics i got the chance to legitimate any change of laws i want” and therefor it is planned to widen the polices rights and criminalization of resistance.

The mainstream media consisting of the family-owned “rede globo”, which is controlling TV, newspapers and internet-services in whole brazil and is an important global player in media, was creating first an image of general delegitimation and later, as the movement was growing and it was more difficult to just say a few idiots are having crazy ideas, it was the intention to split between “upright” protestors and “violent” ones. This was the beginning of the “black block” discussion in brazil, leading to myths and amazing stupid media images of “they organise in darkness and their only wish is to destroy”. Right now, by this is the intention of the ones in power, to fight against a change of society in a direction of more justice, to irritate and split the power of direct action and to weaken the solidarity for the ones facing repression.

There had been massive arrests in june and july, after the protests in Rio turned into an ongoing movement. There had been hughe tent-pickets with public kitchens in the central area of the city for several weeks, which transformed the public space into an area of communication about strategies of the resistance. One activist told us that the citys center never had been so alive as people gathered, exchanged and made a difference visible. Some of the camps had been organised by the mainstream trade-union, one was rather anarchist. The trade unions had some kind of negotiations with the state and dismantled their camps in the middle of october voluntarily. The anarchist camp in front of the main theatre was destroyed by police as they continued resistance.

Because of the teachers strike in september and october, which had its peak with the squatting of the federal municipality next to the camp of the anarchists for three days. The middleclass was therefor getting involved in more radical actions, but the situation escalated with the eviction of the building by riot-police using electroshocks and teargas. That is why lots of teachers joined the anarchist and more militant people in the beginning of october.

There had been a bigger manifestation at the 7th of october with differend spectres united and around 60.000 people, which was the strongest manifestation since june. First the manifestation was quite relaxed, but in the end police escalated the situation a lot. At the 15th of october the situation repeated, but this time the cops encircled the square, arrested more than 200 people and globo newspaper titled “these are the violent protestors”. One person, called “baiano” is since then in prison, blamed as “head of violence”. After the mass arrest, the camp and the tents were destroyed and since then the square was in the hand of the police. At least three people remain in prison, two of them, rafael and eduardo are since summer in prison, the baiano since 15th of october. His case is special, because the media is naming him as “troublemaker with international connections” and guess he would even be paid (for whatever reasons), as “he was 3 times in the USA in the last 15 months”.

Another point is the recent changes in law that prohibid masks in protests. This is something new, but not to be confused with a simple “action-reaction” pattern. Even if people do not fight, repression and laws will be changed, as the main focus of the government is how to make the show of Worldcup and Olympics as less being disrupted as possible. Like at other Olympics in past, the media and politics will keep the focus and the repression on business much stronger than in other conditions. In 2008 the chinese television extremly ignored public topics, that did not fit to “the games”. So the question is not about laws and media, but rather about the own strenght and solidarity.

The uprisings in many brazilian cities this summer and the teachers strike had been fading away the last months and weeks. Some of the demands of protestors had been fullfilled in the summer, as there are few better conditions with the public transports. Some people told us the last time they experienced such a repression like this year in 1968 in the time of militair-dictatorship, where many people died and disappeared. In the middle of november, when we had been in Rio de Janeiro, there had been a hunger strike of two people since the imprisonment of the bahiano at the square in front of the theater for rising public attention for the prisoners. Some few people visited the two hungerstrikers, which had been there for about two weeks. There had been announcements of protests, which had been few in numbers.

One interesting incident was a publical announced assamblea/meeting at the place of the hungerstrikers to discuss, how to support the prisoners and how to create more ongoing movements. There had been around 35 people at the assamblea, several teachers, some feminists, libertarian anarchists and the lawyer of the baiano. The conditions of the prisoners was a topic and the ways how the criminalisation functions. Some people also rised the question of other prisoners, especially people from the favelas, who are facing special repression. The feminists made clear, that not only women are facing harder repression as sexual assaults, but also the movement is too much macho and should be more aware of their own structures. I would adress another problem that in general everybody makes pictures and videos all the time without masks and people post personal and poltical information mixed at facebook and youtube. The movement seems to be young in general. And as people told us, there is no public infrastructure of anarchists and people even use signatures to demand the freedom of prisoners, which i think is a completely wrong strategy. In general there had been many reports of people having a “new feeling” through experiencing police loosing their surveillance in the streets in an uprising of masses. In general brasilian society had not many movements that confronted the police successfull like that. The important question remains as often in history, how to make an ongoing movement out of a revolte. But some people are optimistic, as when the worldcup starts next year and tension rises, people will be ready to get back to the streets against police and state.


Solidarity with all the prisoners of the state and its logic!

Food, dignity and a good live for everybody!


More information in portuguese (of course you find much more on facebook, but i try to avoid it):