Metropolitan Police lies "blown out of the water" + tips for #copsoffcampus

After video footage emerged of a Metropolitan Police officer punching a student protestor on the 4th of Dec 2013, the "Our University Our Streets” demonstration takes place on Weds 22nd Jan 2014, at 1pm, outside the University of London Union, Malet Street, London... against the backdrop of malicious Metropolitan Police prosecutions being "blown out of the water" by photographic evidence, and of massive compensation pay-outs by the Met to victims of police violence. 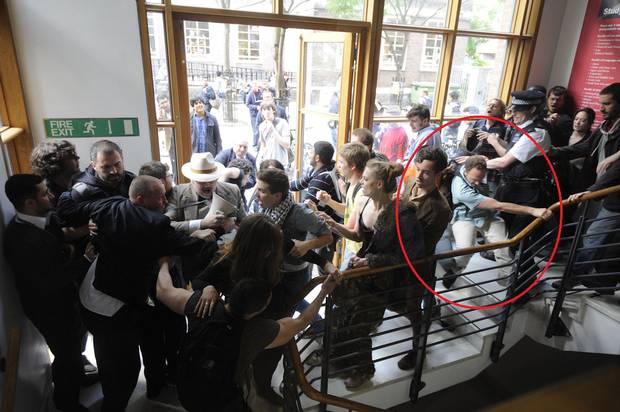 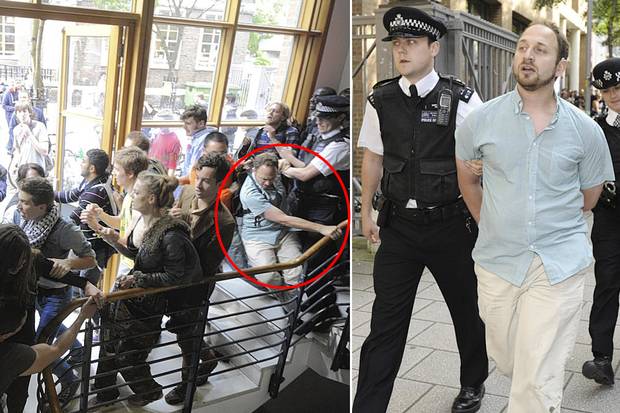 Photos that prove the Met were lying... again

After video footage emerged of a Metropolitan Police officer punching a student protestor on the 4th of Dec 2013, the "Our University, Our Streets” demonstration takes place on Weds 22nd Jan 2014, meeting at 1pm, outside the University of London Union, Malet Street, central London... against the backdrop of malicious Metropolitan Police prosecutions being "blown out of the water" by photographic evidence, and of massive compensation pay-outs by the Met to victims of police violence.

As regards the Jan 22 demonstration, make sure you photograph the POLICE at every available opportunity. Photograph the police officers faces and shoulder ID numbers as close as possible, but DON'T post photos of protestors faces on-line! On the demo - stay mobile, stay alert, constantly look behind you, and inform other protestors loudly if you see police forming-up or approaching (even from a distance). One lesson learned from the last #copsoffcampus demo is that a great way to scupper police mobilisations is to keep the protest moving fast (think "herding cats") and to lead the demo/s into traffic leaving police vehicles stranded.

As regards the specific police assaults and lies in question, expect any "IPCC supervised investigation" (sic) to be every bit as dishonest as IPCC collusion in the cover-up over the police killing of Ian Tomlinson and the lies the IPCC spread after police gunmen executed Mark Duggan...

"Police allegations against two students at a tuition fees demo were thrown out after YouTube film and photographs showed "shocking" inconsistencies in Met officers accounts of the incidents. In both cases the students were wrestled to the ground, arrested, strip-searched, fingerprinted and faced charges that could have damaged their careers. Debaleena Dasgupta, a solicitor from Birnberg Peirce who represented the men, called on Scotland Yard to investigate, adding: "The police are given immense power and malicious prosecution is one of the grossest abuses of this". Both arrests came as education minister David Willetts gave a lecture at London's School of Oriental and African Studies*. Ashok Kumar, 29, had been invited by a government official to interview Mr Willetts at the event. Police claimed Mr Kumar twice pushed an officer and blocked an attempt to stop a protester allegedly pushing a camera in another constable's face. He was charged with obstruction. The case against him was dropped in court after YouTube footage showed the police account was wrong and that no assault or obstruction had taken place. Scotland Yard has agreed to pay Mr Kumar £20,000 in damages after he launched legal action for wrongful arrest, false imprisonment, assault and malicious prosecution." (*SOAS is a few hundred yards from the ULU building)

"The other case involved Simon Behrman, 36, a law PhD student at Birkbeck College who had gone to SOAS to demonstrate against Mr Willetts's policies. The Met paid £20,000 damages and conceded that testimony given in court by PC Chris Johnson clashed with the evidence of photos of the incident. Mr Behrman claimed that he fell after PC Johnson grabbed his rucksack and the protest group he had joined surged forward. Legal papers claim Mr Behrman was then punched in the chest by another officer, PC Thomas Ashley, before being taken in a headlock by another officer. At his trial at Highbury magistrates court, PC Johnson said Mr Behrman had been violent and had struggled with a security guard. The case was abandoned when pictures taken by a photographer were shown to the court which the judge said "blow this case out of the water". The Met said that it had begun an investigation. A spokeswoman added: "Three officers are the subject of the IPCC supervised investigation. At no time had we previously received a public complaint in relation to this matter. As soon as we were aware of the video evidence an investigation was launched"."

"A policeman seen punching a student in the face during a university protest will not face disciplinary action, it emerged yesterday. The officer was caught on film swinging at hooded protester Tony Jones, throwing the 24-year-old off balance with a blow to the shoulder before flooring him with a jab to the face. Last night the Metropolitan Police said no investigation had been launched and the officer concerned remained on duty in London." -