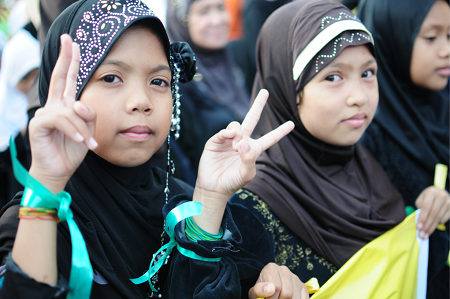 “The signing marks a significant chapter in our country’s history which we hope will finally address historic injustices in the region and fulfill the aspirations of freedom by the Bangsamoro. While the challenges are great, these can be overcome. Peace is a shared task for all of us, Filipinos and the Bangsamoro,” Akbayan Chairperson Risa Hontiveros said.

Hontiveros who is also a peace activist being the Secretary-General of the Coalition for Peace (CfP) from 1988 to 1992 and a member of the government peace panel with the NDF from 1998-2004, cited the peace panels for their “enduring spirit and selflessness so that all of us can finally enjoy the fruits of peace.”


Women and warriors for peace

“We commend the fortitude, perceptiveness and broadmindedness of both parties. We especially laud the women leaders from the side of the government who navigated this difficult terrain, a terrain often reserved for men. We likewise praise the Bangsamoro warriors whose bravery was shown best when they chose to talk and work for peace,” Hontiveros said.

“Now it can be remembered that this agreement was forged with the help of women of strength and perceptive Bangsamoro warriors,” added Hontiveros.

“We also laud the firm commitment displayed by President Aquino. At a time when it is easier to let the guns do the talking, the government’s resolve to bring into being a comprehensive, progressive and binding peace agreement is deserving of praise,” Hontiveros remarked.

However, Akbayan cautioned the government and other stakeholders to make peace an inclusive process. It believes that other legitimate revolutionary forces in Mindanao have to be persuaded to the side of peace while ensuring the security of the people against lawless elements and terrorists.

“While we celebrate this notable achievement, we remind everybody especially the government that if we are to push for genuine peace, it must trump over sectarianism and exclusivity. This peace must embrace all those who have been truly marginalized and neglected,” Hontiveros said.

Peace must lead to new social and political relations

Akbayan also asserted that the agreement must begin the process of genuine redistribution of wealth and the creation of new and progressive social and political relations that will tear down poverty in the region.

“Peace is also about addressing poverty, discrimination and lack of opportunities to live ably and productively. At present, the future Bangsamoro region has the highest levels of poverty and want afflicting close to five million people,” Hontiveros said.

“We look forward to that this agreement will jumpstart the process of not only providing the Bangsamoro people political peace but also socio-economic peace brought about by genuine development,” Hontiveros added.