Nimal Mendis' Master Sir is a landmark song in Sri Lanka with deep social commentary critiquing the continual behavior between the boss and the worker. 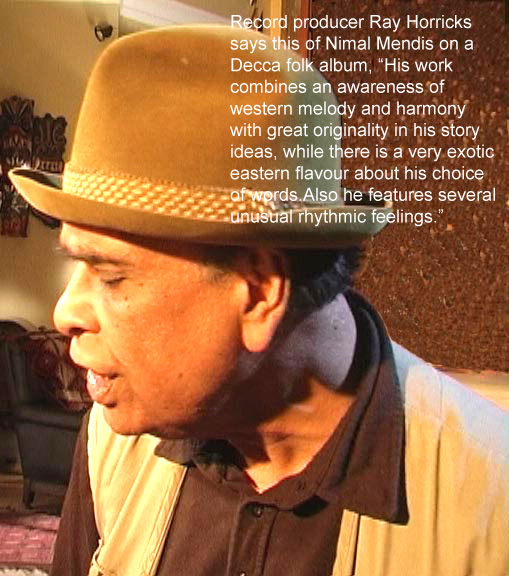 Nimal Mendis’s song “MASTER SIR” was written for the Sri Lankan Film Kalu Diya Dahara, considered as "a watershed in the annals of Sinhala films", which dealt with the struggle between workers and administration in tea plantations. It was made in 1971, and shown nationwide in 1974. The Director of the film was the late Manik Sandrasagra.

"Master Sir" is about colonial Sri Lanka; the words tell a story about the dignity of labour, a story not about wages but about social justice. The song has been a hit for over thirty five years and is considered as one of the “Master” songs to have come out of the island of Sri Lanka. The song was sung in the film by Neville Fernando. It was the last song he sang before he died of leukemia.

When the Sri Lanka Broadcasting Corporation { Radio Ceylon at the time } played the song there were over five hundred requests the next day. Nimal Mendis’s song “Master Sir” has been covered by many singers in Sri Lanka and is a favourite song that is sang in any gathering.

The link below is one of the Sinhala versions of the song:


THE TEN CENTS MORE, WHICH YOU HAVE PROMISED TO PAY ME

WILL BUY MY CHILD AN EXTRA BOWL OF RICE

BUT MASTER, SIR, I HAVE MY DIGNITY


THERE’S A LONG LONG WAY FOR US TO GO

BEFORE THIS TUG-A-WAR CAN EVER END

AND WHEN THAT DAY WILL BE I DON’T KNOW

MASTER, SIR, WHEN CAN I CALL YOU FRIEND

I REMEMBER HOW THE WHITE FOLKS TREATED ME

WITH A POUNDING HEART WE SPOKE ON BENDED KNEE

BUT MASTER, SIR, AS GENERATIONS GO BY AND DIE

I TELL YOU NOW TO HAND ME NO MORE LIES


THERE’S A LONG LONG WAY FOR US TO GO

BEFORE THIS TUG-A-WAR CAN EVER END

AND WHEN THAT DAY WILL BE I DON’T KNOW

MASTER, SIR, WHEN CAN I CALL YOU FRIEND