The successive deaths of a 17 year old Iranian migrant, who fell from a truck that he was trying to hide in to reach England on 30th January
(see article below) and a migrant killed by a bullet in the chest
on 2nd February has caused a wave of outrage. 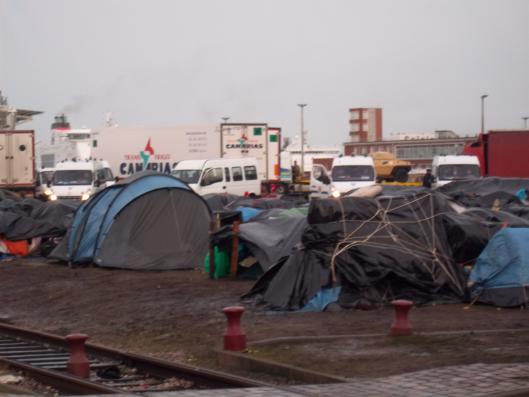 On 4th February, thirty migrants, mainly Syrians and Egyptians marched to the port to carry out a sit-in to demonstrate their anger at the death of migrants and the inhumane living conditions people face in Calais.
Four vans of CRS (riot police) and a few police cars were quick to
arrive at the end of the port and controlled the migrants, also trying to intimidate people with insults. The CRS then filmed the control, zooming in on each migrant and activist present.

A 17 years old boy from Iran killed by a truck. Read the report on

http://calaismigrantsolidarity.wordpress.com/2014/02/03/minor-killed-by-a-truck/
A group of migrants protested at the ferry port

http://calaismigrantsolidarity.wordpress.com/2014/02/04/another-migrant-killed-protests-at-the-port-of-calais/
An unidentified young man was killed by a bullet fired by unknown person

Following evictions of all squats old and new, most people are spending the Winter camping out. No Bordes activists are taking the French State to court for illegal eviction of a squat, the case twice postponed - next court date March 12th.

http://calaismigrantsolidarity.wordpress.com/2014/02/05/calais-report-on-the-illegal-expulsion-of-the-squat-in-rue-saint-omer-the-petty-maneouvres-of-the-state/
People are only receiving one, badly cooked meal every 24 hours – two at the week-end.

There are over 100 people camping out in front of the place of food distribution, with almost daily police raids, sometimes twice in a day, arrests etc. They are from Afghanistan, Syria, Egypt, Iraq, Kudristan and Pakistan (Pashtuns from the border with Afghanistan), very good camp with very nice people, all getting on fine, but the conditions are terrible, and the camp is very poorly supported. Some charities bring a hot drink sometimes, but they can make tea, and cook themselves, if they have food to cook! but often they do not even have wood to burn. Need people to do deliveries, car and vans needed! (it is often possible to get free food to cook, from various sources)
Most of all we need people with cameras, to keep monitoring what police are doing!

A small camp of Syrians and Egyptians was evicted

The Sudanese jungle was destroyed by police several times.

The Eritreans/ Ethiopians are in a camp by the canal, near the Town Hall... over 70 people.
The women and children, up to 30 at any time, are in the legal squat opened by No Borders in bouldevard Victor Hugo, that is threatened with eviction.

Police violence is on the rise, especially around lorry parks where people go to try for England - though it is very difficult to take cameras there! Instead the police have put cameras, to use the photos as evidence against smugglers or presumed smugglers. Since the photos are usually not very clear, anybody could be a smuggler!

calais_solidarity@riseup.net 0033 645465986 - if you donate cash please specify what it is for.
For big deliveries contact the vestiaire: M.Christine.Descamps
Thanks a lot!