The report should be analyzed carefully. By omission, it inserts several misleading concepts:

1. The presence of British jihadists in Al Qaeda formations is portrayed in relation to individual and isolated cases. The Brits are not being recruited in an organized fashion. Their numbers are limited.

2. The rebels are not sponsored by foreign governments. There is no mention of recruitment of jihadists in the UK.

3. The Sky News report tends to deny that the rebels are torturing Syrian civilians. The victims of British Al Qaeda operatives in Syria are not civilians, they are other rebels. 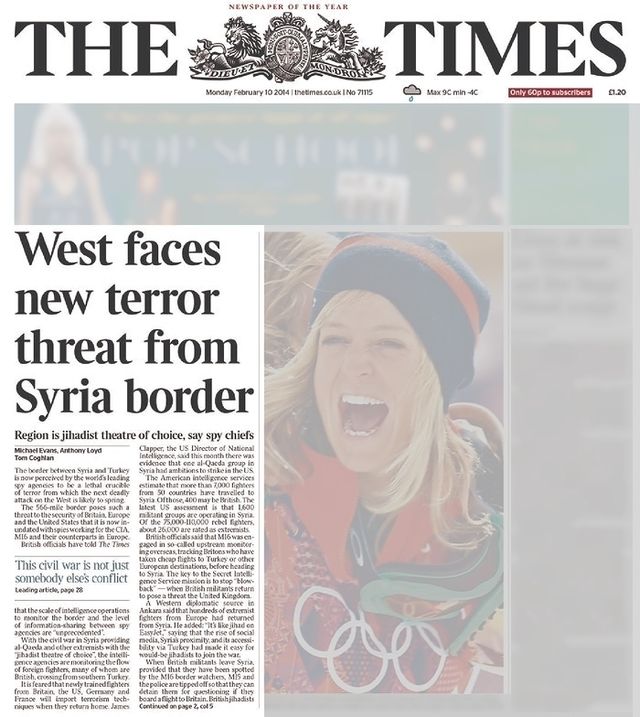 
The report should be analyzed carefully. By omission, it inserts several misleading concepts:

1. The presence of British jihadists in Al Qaeda formations is portrayed in relation to individual and isolated cases. The Brits are not being recruited in an organized fashion. Their numbers are limited.

2. The rebels are not sponsored by foreign governments. There is no mention of recruitment of jihadists in the UK.

3. The Sky News report tends to deny that the rebels are torturing Syrian civilians. The victims of British Al Qaeda operatives in Syria are not civilians, they are other rebels.

What the report portrays with authority quoting Shiraz Maher, a senior research fellow from King’s College, are “rebels torturing rebels”:

“The footage is quite remarkable, it shows the torture of an individual who is himself a Syrian rebel. So this is rebel-on-rebel violence, which is something we’ve been hearing quite a bit about, but we’re seeing the involvement, allegedly at least, of British citizens for the first time.”

Other British fighters, thought to be friends with the man who posted the video, also use social media to send updates from Syria.

One man, also believed to be from London, recently tweeted a photograph showing three blindfolded and handcuffed men.”

This rebel-on rebel torture narrative based on “academic expert opinion” and unconfirmed social media is shear media disinformation. It denies the conduct of atrocities by a rebel force which is sponsored and financed by the Western military alliance including the British government.

How convenient: US-NATO cannot be held responsible for “rebel-rebel violence”.
The report conveys the illusion that Al Nusra and the FSA are separate entities and that the British jihadists are fighting the Free Syrian Army (FSA). Until the demise of the FSA in November, Al Nusra was supported directly by the FSA High Command in liaison with Washington.

Let us be under no illusions, Al Nusra is controlled by Washington and its allies. It is integrated by highly trained professional Western Special Forces, acting as military advisers to the terrorists.

Most of the atrocities committed by Al Nusra have been directed against civilians.

The Sky News report also suggests mistakenly that al Nusra, which is supported covertly by the

Western military alliance “is the only jihadi outfit operating on the ground in Syria that is explicitly endorsed by al Qaeda’s global leader”:

“Videos and images posted on social networks by fighters who have traveled to the country from the UK suggest they may have taken part in beatings and even executions.

The material was uploaded onto the accounts of two men from London, thought to be fighting in Islamist rebel groups that have some links to Jahbat al Nusra.

Jahbat al Nusra is the only jihadi outfit operating on the ground in Syria that is explicitly endorsed by al Qaeda’s global leader.

One video, apparently taken on a mobile phone, was posted to Facebook on January 30 this year .
It shows a prisoner, apparently from the Free Syrian Army, being beaten for insulting Allah.

The FSA prisoner is heard shouting his innocence as he is bound to a car tyre and beaten across the legs with what appears to be a metal baton.

As he writhes around on the floor, one of the men stamps on his head.

Repeatedly he cries in Syrian Arabic dialect that he is not a “kuffar”, a non-believer, and that he is a “mujahid” – a Muslim fighter like them.

As the beating continues he begs them not to kill him.

Towards the end of the video, the baton breaks in half, and is held up to the camera by one of the captors.

The Facebook video post is accompanied by a chilling description by the British citizen who uploaded it.

The social media account has been verified as belonging to a British citizen by experts from the International Centre for the Study of Radicalisation (ICSR) at King’s College London, a leading research unit on foreign fighters in Syria.”

For further details including the video, access complete report at

This Sky News report stylizes British involvement based on unconfirmed (fabricated?) social media postings. It tends to focus on individual cases based on anecdotal “evidence” from Facebook and Twitter.

While it confirms what is already known and documented regarding British involvement in the Syria insurgency, it fails to mention that the British government has from the outset supported the recruitment of British jihadists in coordination with NATO.

The report has racial overtones: it intimates that the British jihadists are also a threat to national security in the U.K., which should be promptly addressed by the British government.

Moreover, the Sky News report tends to dismiss the significance of British paramilitary presence among Al Qaeda affiliated rebel forces. Without supporting evidence, it points to the presence of some 40 Brits in rebel formations, when in fact the numbers are much larger. It fails to acknowledge that British SAS forces have been on the ground in Syria from the outset in March 2011.

“British MI6 operatives and UKSF (SAS/SBS) personnel have reportedly been training the rebels in urban warfare as well as supplying them with arms and equipment. US CIA operatives and special forces are believed to be providing communications assistance to the rebels.” Elite Forces
UK, January 5, 2012 (emphasis added)


According to data provided by Scotland Yard (quoted by the London Evening Standard) “the total number of British participants in the conflict is estimated to be in the “hundreds”.

The Scotland Yard figures are consistent with those contained in a recent Turkish government report which was sent in December to the governments of EU member countries. The report confirms that Turkish police arrested and deported 1,100 E.U. citizens “who came to Turkey in 2013 to join al-Qaeda-linked groups fighting in Syria”.

We are not dealing with an isolated event involving a handful of British jihadists as conveyed by Sky News. What the official Scotland Yard figures suggest the existence of an organized recruitment process in the U.K, which has the tacit support of HM’s government.

“The British government of Prime Minister David Cameron has blood on its hands. It is acting in defiance of its own [anti-terrorism] legislation.” (Should David Cameron be Prosecuted for Recruiting Brits to Fight in Al Qaeda Ranks in Syria? By Prof Michel Chossudovsky, Global Research, February 05, 2014