The trial of Debbie Vincent, the first of the 'Blackmail 3' defendants, is due to start this Monday 17th at Winchester Crown Court. Please support her and the other defendants! 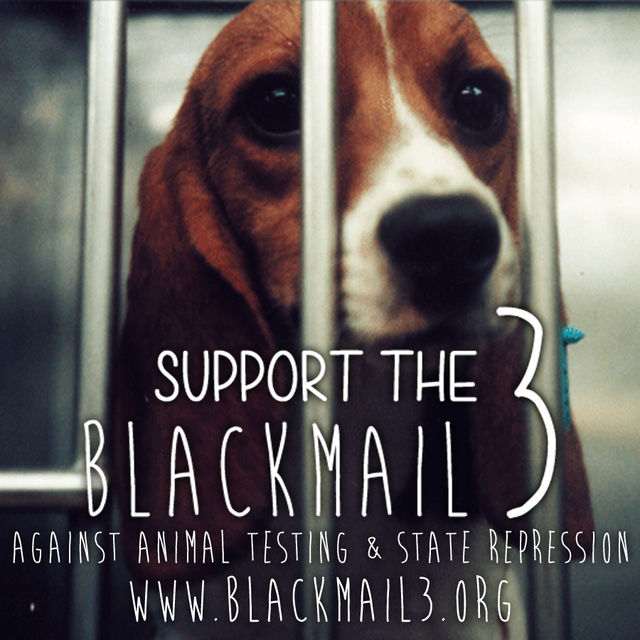 The trial of Debbie Vincent will begin on Monday 17th February at Winchester Crown Court after being adjourned on Wednesday. Ms. Vincent is facing charges of 'conspiracy to blackmail' over her involvement in the campaign to close down Huntingdon Life Sciences, the controversial animal testing laboratory. She, and two others, are being prosecuted by the Crown Prosecution Service in what supporters are calling the 'Blackmail 3' case.

Debbie Vincent was arrested on 6th July 2012 after Police raided her home in London. Simultaneous raids also took place at several addresses in Amsterdam resulting in two arrests. All three people were arrested on suspicion of 'conspiracy to blackmail' relating to the campaign against Huntingdon Life Sciences. Ms. Vincent was accused of committing this between 2001-2011 and the two people in Holland between November 2008-December 2010. During the raids, police forced entry into a shared office space, removing computers, electronic devices and paperwork belonging to a variety of campaign groups. This is on top of a huge amount of items taken from the suspects' homes, which included cameras, printers, storage devices and several laptops.

“What we are seeing is a coordinated campaign against animal rights activists in an effort to silence dissent,” said Adrian Shaw of the Blackmail 3 Support Campaign, “this is the third conspiracy to blackmail trial in the UK involving people accused of campaigning against Huntingdon Life Sciences. This charge has been deliberately used against campaigners due to its good conviction rate and because it carries a maximum sentence of 14 years in prison.”

Stop Huntingdon Animal Cruelty (SHAC), the campaign to close down Huntingdon Life Sciences, was started in 1997 after an expose by British Union for the Abolition of Vivisection (BUAV) was broadcast on Channel 4. The undercover documentary, “It's A Dog's Life”, showed serious breaches of animal-protection laws, including a beagle puppy being repeatedly punched in the face and animals being taunted by members of staff. The laboratory has been exposed several times since then, uncovering a string of animal abuse, such as: workers performing autopsies on animals while they were still alive; staff operating while under the influence of drugs; and controversial xenotransplantations which involve the transplantation of live organs between animals of different species.

“This is the second time I have faced these spurious charges over the past seven years. I am innocent, and look forward to having my day in court and fighting these charges.”, said Debbie Vincent, “I am very proud to have campaigned on these pressing public issues that effects animals, humans and the environment. I believe and continue to believe that the deliberate infliction of pain and suffering upon animals by humans being whether for commercial gain, scientific or other research, is morally wrong.”

The court case begins Monday and is expected to last up to six weeks. The defence is expected to argue that Ms. Vincent was not party to any conspiracy such as is alleged and that at all times it was her aim to lawfully prevent Huntingdon Life Sciences from engaging in acts of cruelty to animals for financial gain. They will argue that she believed that her own activities were reasonable given the circumstances.

For more information about the case, HLS and the defendants see:

We are asking people to send in photos and messages of support for Debbie, Pru and Sven. You can read the previous messages here:

http://blackmail3.org/support.html. The call out for solidarity statements (via the Blackmail 3 Facebook:

"We are calling on all members of the international movement to show solidarity with the Blackmail 3! Wednesday 12th February will mark the beginning of the first of the Blackmail 3 trails. The case is the culmination of a coordinated campaign against animal liberation activists who are fighting to close down Huntingdon Life Sciences, the world's third largest animal testing laboratory.

Three activists were arrested on the morning of 6th July 2012 during police raids in Amsterdam and London and charged with “conspiracy to blackmail”. The two people from Amsterdam were arrested on a European arrest warrant, and after a week in prison were released on strict bail conditions, having surrendered their passports. They now await extradition to the UK. The third defendant, in London, was bailed the following evening and also has many restrictive bail conditions.

This case is just the latest in a long list of attempts by the authorities to silence dissent, we must stand united in the face of repression and show them that we will not be deterred!

Send us your messages of solidarity to the Blackmail 3! Photos or statements can be sent to us via Facebook or the website (

http://blackmail3.org/). Show the Blackmail 3 that you support them in whatever way you can!"