On January 4th 2014 it became apparent that, at the Barton Moss protest camp, police removed a footpath sign in a tactic to arrest protesters for highway obstruction. 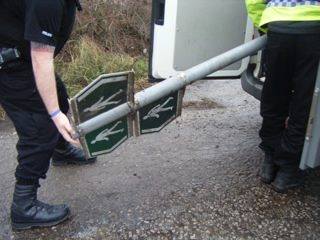 After countless arrests and pointless confrontations a court has finally ruled that the road is a footpath. Nearly all of the 100 arrested had charges of highway obstruction. Hopefully, this makes all of them officially crap arrests. As a celebration, the camp had a party and despite the rain, attendee’s called it “better than Reading”.

The camp is opposing fracking, like the widely reported camp at Balcombe, but much colder and wetter.

Is the protest now advancing onto the freeway of victory?