Was the deliberate flooding of the Somerset Levels by EU Policy partly a way of letting the frackers in? 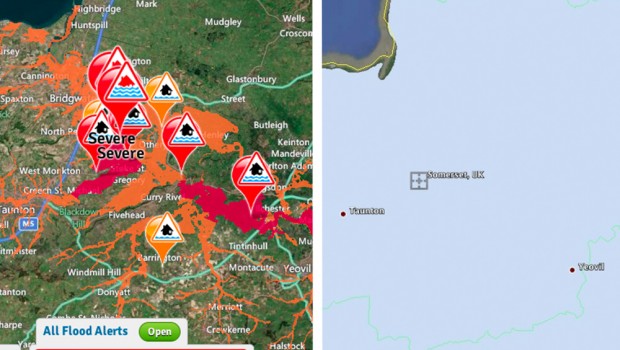 It's no wonder that when Chris Smith, the head of the Environment Agency, arrived on the Somerset Levels today, he was running scared. Apparently, he didn't let anyone know exactly where he would arrive, and when.

He didn't even tell the local MP.

Conservative MP Ian Liddell-Grainger, who represents Bridgwater and West Somerset, was blowing a gasket when contacted about it by BBC News: "I will tell him what I bloody well think of him - he should go, he should walk. I'm livid. This little git has never even been on the telephone to me. When I find out where he is, I will give it to him. He has not told the local MPs, the local council or the local press where he is going to be. He's a coward."

This failure to even contact the democratically elected MP of that constituency is typical of the fascist goose-stepping jackboot of this global corporatist takeover. Because even if you believe that all the recent stormy weather is an act of God - rather than an act of HAARP - there is one inescapable smoking gun. You don't have to be a conspiracy theorist, because it's all on record in the form of government consultations and EU Directives, to realise that the flooding of the Somerset Levels has been largely caused by a deliberate run-down of the necessary maintenance to drainage infrastructure which is required for geo-engineered land.

This draconian slashing of the funding of the river dredging, and other necessary work needed for adequate drainage, has been carried out in line with EU policy which itself is aligned with UN Agenda 21, which seeks to move people out of the countryside and into the cities.

What will happen next is that the carpet baggers will move into the Levels to buy up the land at rock bottom fire-sale prices, which is all the farmers will be able to charge now that the land has been contaminated from overflowing sewerage and their farms are virtually uninsurable. The carpet baggers will probably make a killing in selling that land on to the frackers, as it stands over a huge shale gas field which they've been slavering over for some time.

Greenpeace has just published this map showing fracking licences being offered for land currently under severe flooding on the Somerset Levels. (Link here:

"The government is likely to issue licenses to explore for oil and gas across large parts of Somerset as the area continues to be hit by the worst flooding for hundreds of years.

"A spokesperson for the Department of Energy and Climate change (DECC) confirmed that the next round of Petroleum Exploration and Development License (PEDL) blocks will be issued ‘later this Spring’.

"A map of license under consultation by the department includes the Somerset levels and many areas currently covered by severe flood warnings. Studies by the British Geological Survey published by DECC suggest parts of Somerset may be appropriate for oil or gas extraction though exploration is at a very early stage.

"Flood risks would have to be considered as part of an Environmental Impact Assessment (EIA) though the government’s planning guidelines suggest it may be prepared to consider developments in flood risk areas – so long as measures are in place to manage risk.

"The SEA for the next licensing round notes that “as the location of [actual drilling] sites vis-à-vis areas with a high probability of flooding is unknown at this stage, it has not been possible to determine the likelihood or magnitude of effects on this objective”.