Arrested, suspended, then banned from elections: my student experience

On Wednesday 29th January I made a decision which has defined my short-term, if not long-term, future. It was a decision that I made after being kettled in the pouring rain by police for three hours. The decision I made was not to give the police my name. Maybe it was naive, maybe it was stupid, and it was probably mostly stubborn. But I did so for one simple reason: I felt I had been treated unjustly along with all of the other kettled protesters. I knew of my right not to give the police my name as a condition to be released from a kettle, and of my right to not be arrested for it. I knew that I had done nothing wrong. I had not committed any criminal damage or assault, and so I had nothing to fear. Having experienced similar situations in London, but in the position of the observer, I expected to be brought to the police station, to be interviewed immediately and to be released within a few hours without any charges. But that is not what happened. 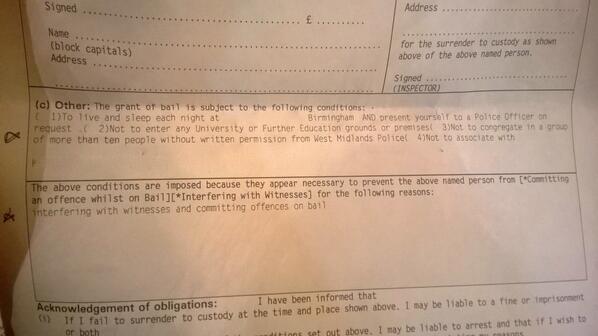 An example of bail conditions

Instead I got released without any charges, but only after spending 28 horrible hours in a cell – not counting the 4 hours between my actual arrest and my arrival in my temporary home.

I got released to find my bail conditions essentially banning me from doing anything – from going on campus, from seeing my friends, from going to any parties or even sport matches, to forcing me to sleep at my own house every single night.

And I got released to find myself banned from my own elections, leaving me with no opportunity to run for the position of Vice President Education, something which I had been looking forward to, had been preparing for, and into which I had invested a considerable time.

I believe, the University´s reaction to the 29th and the suspensions specifically have to be seen in the wider context of harassment used by university bosses against protesters. They constantly try to single out students who do not fit their agenda, put them through disciplinary procedures, threaten them with expulsion, and generally try to intimidate them as much as possible.

As sad as it is, the University does not care about the welfare of any of these students, nor does it care about me or any of the other suspended students. What it cares about is it’s image. Instead of letting an ambulance onto campus, instead of stopping the unlawful activities of the police, University management actively encouraged those activities by their collaboration with the police, their statements and emails sent to staff and students.

The suspension of “only” five of the 400 protesters shows that they are simply playing a game of odds. Without any evidence from neither the police nor the court – again the only “crime” the five of us committed was not to give our name -, the university has decided that it was, us five, who destroyed poor old Joe (the clocktower) and consequently suspended us. It just looks better politically, to blame five students rather than 50, doesn´t it?

Furthermore, it has been shown time and time again that the University does not come down as hard on students who are accused of breaking the same university regulations in a similar way when it is not in political opposition to the University. For example, students get regularly thrown out of Fab & Fresh for harassing security or sometimes worse. They then face disciplinaries and if proven guilty and worst comes to worst might be banned from going to Fab for two weeks as a punishment. I, on the other hand, despite not even having been proven guilty of a single offence or having given any opportunity to defend myself, have not only been banned from going to Fab, but also any other single event, academic or non-academic, taking place on our campus.

Those who have suspended us claim to only be following the rules, yet it is obvious to a casual observer that they are using these rules in an highly unusual and out of proportion way. An immediate suspension, prior to any conviction, is premature, highly problematic and in this case possibly unlawful. My lawyers are currently preparing to take legal action and sue the University. However, this process could take months. Months, which neither my degree nor my candidacy in the VPE election have time to wait for.

Therefore the Guild must finally step up now and recognize the clear political nature of the actions of the University and allow an election accessible to all candidates – including myself. As our Vice President Democracy and Resources stated yesterday, that could take different forms. If the Guild does not defend the most basic principles of union autonomy and democracy, then this risks the appearance that this Guild (and University) is an environment within which the expression of divergent and sometimes critical views are dealt with punitively. This is important not only internally, to current students and staff, but in terms of the Guild´s external image.

Looking back on the last 2 weeks, I can say that they have been by far some of the most stressful of my life and if it had not been for the support of my fellow Defend Education activists and friends, I probably would have not been able to cope with the situation. However, being treated like a criminal by my own University for simply opening my mouth quite loudly, has just reassured my wish to stand for the position of Vice President Education.

Our University does not care for mine or any of your welfare, but your Student Union, the Guild of Students, should do. It should be an autonomous institution which stands up to the University and be in constant political opposition to its damaging plans. One step which will bring us closer to such a Union is delaying these elections until the suspensions are overturned. You do not have to agree with the protest that took place, you do not have to like my politics. This however, is simply a matter of democracy, fair elections, right and wrong, of justice and injustice. So far, all the five of us have experienced over the last two weeks is injustice by the University and the Police, now it is time for students to change that.

Come to the weekly Wednesday demos. The next one is at 1pm by the clock tower this Wednesday.