Boycott Workfare’s welfare action gathering on Saturday was a massive success. 80 people from groups across the country came to participate in the day of workshops based around info and skill sharing on the various welfare issues we face. The programme was packed, with sessions on JSA, ESA, housing, fuel poverty, and more, with people remarking on the difficulty of deciding which workshop to attend when there were clashes. We organised the gathering because supporting claimants to know and enforce their so-called rights, and claimants organising together and shaping the campaign, has always been a major part of what we do. For this to happen effectively local mutual support groups are key (it was from a London Coalition Against Poverty group that Boycott Workfare came out of) – we’ve distributed thousands of ‘How to Avoid Workfare’ leaflets but along with these, we really need a buddy or a group of people when challenging Job Centre Plus. The gathering was called to support the growing number of local groups so that we can build on the impressive work of challenging workfare and sanctions across the country through mutual support and direct action, like the examples shared with us early on in the day of the occupation of the £3 million council house and a blockade of the workfare exploiters Salvation Army. 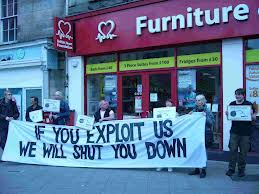 The space to share these sorts of stories, experiences and tactics is how all the sessions were structured allowing the massive amount of knowledge held by everyone there from direct experiences of struggling within and against the welfare system to be collected together. If you’ve got notes from the day, send them to Boycott Workfare to be collated with the ones they’ve taken, and feel free to post below. I particularly liked the comment in the mutual support group discussion asking how we could build counter power like that in late 1970s Italy. We didn’t quite get round to discussing this in the session, but we did have a really interesting discussion in the limited time we had.

A diverse range of grassroots groups participated including Edinburgh Coalition Against Poverty, London Coalition Against Poverty, Disabled People Against Cuts, Fuel Poverty Action, Housing Action Southwark and Lambeth, Leeds Hands Off Our Homes, Hackney Digs, Bristol Claimants Union, Birmingham Claimants Union, Brighton Benefits Campaign, Kilburn Unemployed Workers Group, Crossroads Women’s Centre, Refuted, Universal Automation, and possibly some I’ve forgotten, as well as people from places without a group but looking to start one. The gathering allowed people to make thick ties with other people and groups with loads of really valuable discussions happening within and outside the workshops throughout the day. It was really wonderful seeing so many new people, hearing inspiring stories, coming up with new ideas for actions (keep your eyes peeled) and new networks of support (e.g. informal email based groups for working tax credits and a mutual support group discussion). The workshop on Universal Automation has lead to some new ideas for this awesome app and I’m sure that lots more will come out of the day over the coming months.