Martin Richards, Why he really retired?

Shocking revelations have been made to Matt Taylor, in his capacity as Shadow Sussex Police and Crime Commissioner, about the real reason why Martin Richards, ex-Sussex Chief Constable stood down unexpectedly this week. 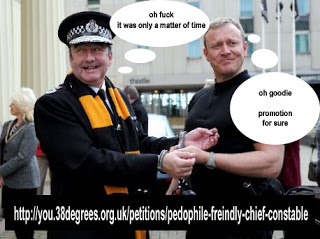 Martin Richards arrested, "It was only a matter of time."

On the 19th December 2012, Commissioner Katy Bourne, announced that Mr Richards’ contract of employment has been extended until October 2014, saying “This gives us almost two years to build on the professional relationship we have already established.”

Which mades it all the more puzzling that only a year later he announced his retirement, planning to step down in March 2014, only to stand down this week, without fanfare.

Move along Ladies & Gentlemen, nothing to see here.

Exclusively revealed to Matt Taylor in his capacity as Shadow Sussex Police and Crime Commissioner, Martin Richards stood down because he is under investigation for misconduct for a second time in as many years.

“I call for the resignation of Katy Bourne, Sussex Police and Crime Commissioner.”

“Katy Bourne is a disgrace to accountability and justice, and must go now.”

As revealed in the youtube video which accompanies this report, the whistle blower states in no uncertain terms.

A police station was used to commit serious fraud.
Someone got violently assaulted and frightened with false arrest.
That’s why he stood down.
He’s under investigation now.

“They never said this would happen at Roedean.”
As this breaking story develops, Sussex Police is in turmoil.

As we join the conversation:

Rocked from the embarrassment of having to admit that he did not know about Parliamentary Privilege during the Tim Loughton fiasco, Martin Richards isn’t new to controversy.

In the run up to the November 2012 Police and Crime Commissioner elections, Matt Taylor left the audience stunned, having publically declared that if voted as the Sussex Police and Crime Commissioner, he would sack the Sussex Police Chief Constable Martin Richards, following an allegation of misconduct, of bringing undue influence on a criminal case.


Police & Crime Commissioner Elections 2012
“I would sack the Chief Constable at the first whiff of Corruption,” said Matt Taylor.

Details became clearer after a 38 Degree petition was posted which called for the Removal of Martin Richards, as “a complaint made against Arun District Council in 2002 that a pedophile ring was operating within the council offices appears to have been interfered with by the Chief Constable who appears to be friends with the ex-Chief Executive of the Council.”

It was 50 years ago in 1964 that the forerunner of Police and Crime Commissioners were introduced following the 1964 Police Act.

For the first time in policing history, local police forces were taken away from local control and accountability with Watch Committees, and put into the hands of the Home Secretary.

In 1958, following a trial into police corruption in Brighton, the presiding judge stated that the judiciary could have no faith in police evidence until the chief constable had been replaced.

They wanted Chief Constable Popkess replaced because he wouldn’t hand over a pertinent report into financial irregularities by some City Council members to the Watch Committee. Watch Committees would normally be made up of local independent people like councillors and magistrates.

Obviously this brought up the constitutional question of who controls the Police?

The “Popkess Affair” was a prime factor in the appointment of the Royal Commission and the subsequent Police Act 1964 which sought to establish the respective powers of the Home Secretary, a Police Authority and the Chief Constable.

50 years on, it would seem that Brighton Connection is again playing it’s role in discrediting Police and Crime Commissioners, raising the question, isn’t it time we go back to Watch Committees?

History can be really fascinating. Have I told you about King Arthur II being a real historical figure yet?

The Guardian Newspaper are running the head-line, “Scrap Police and Crime Commissioners,” citing former Labour home secretaries, Alan Johnson and Charles Clarke, who call for PCC’s to be scrapped, politics out of policing and police forces reorganised.

Even Martin Richards stuck the knife into Katy Bourne’s back, “What I hadn’t foreseen is the fact that if your single elected PCC is a politician and elected on a party political ticket of any persuasion, then that brings a new dimension.

Politics and policing in my view shouldn’t mix, and don’t really mix, but when we had a Police Authority there was more of a balance I think it is fair to say.”

Blow the whistle on corruption and show the bad how far over the line they’ve come.

As we join the conversation with Mystery Man.

“I’M NOT A BULLSHITTER MR TAYLOR. Listen to what I’m saying. There’s two of us and a lot of people.”

“We will came back to you, now that we know we have the right person.”

“We understand what your motivation and your criteria is.”

Who do you believe Martin Richards or Mystery Man?

And this is what it all comes down to…

“If I ask you a question, I expect you to answer me with the truth.”

We know why he’s resigned
We know exactly what he’s up to
We know exactly why he’s done whats he’s done
We know and can prove that the whole police force and over 300 people working across agencies are guilty of misconduct and malfeasance in office
We know and have substantiating evidence
They will be going to prison.
Involves high ranking conservative MP’s in power, including David Cameron
We can bring the whole thing down
Giles York, the acting Sussex Chief Constable has yet to comment.