The situation continues tense at the farmhouse in Coulogne (suburb of Calais) with a constant presence of up to 80 fascists and supporters, death threats and now molotovs thrown at the house. The police look on laughing. 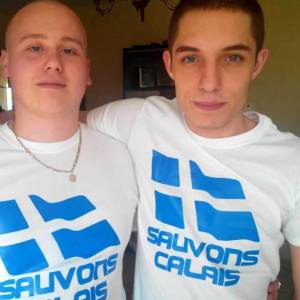 fascists with clothes on

A group of people living inside a squatted farmhouse in Calogne, on the outskirts of Calais, have been under attack for several days by a gang of fascists at times numbering up to 80. The gang "Sauvons Calais" ("Save
Calais") is an anti-immigrant group led by overt fascists including the swastika-tattooed spokesman Kevin Reche. As the fascists throw rocks and molotovs, and attack the house with sledgehammers, the police have watched laughing. The people living inside the farmhouse are doing their best to hold up as the attacks escalate, and not give in to fascist violence. But they need much more support.

Sunday 23/2: A message from the inhabitants of 122 Rue Émile Dumont in Coulogne
(suburb of Calais).

We're writing to you again with the latest news from the front. Our aggressors have reached a new level of violence. On Saturday 22, we were attacked by intensive volleys of stones from two in the afternoon until
half past midnight. Around 4.30 pm, one man who had threatened on the facebook page of 'Sauvons Calais' ('Save Calais') to kill some migrants and throw them into the canal threw a rock, from 6 metres away, which hit
the neck of a friend who had gone outside to talk with some of the neighbours. When we went outside to eat in the garden, we received a rain of some 20 stones in just a few seconds. As the numerous attacks on the
roof and the windows went on, the crowd shouted encouragement every time a stone hit its target. As the most violent attack of stone-throwing was going on, the collective 'Sauvons Calais' was publicly hosting a buffet
outside with food and coffee, between 6 pm and midnight. They also used laser pointers against cameras and directly into the eyes of the inhabitants (legally these can be considered as weapons in this context). There were a maximum of 80 people protesting (at about 10.30pm), the last of them left around 1 am.

During all this afternoon and until about 1 am, the police (National Police and plainclothes 'Brigade Anti-Criminelle') were present, up to 8 in number. They were notable in their passivity, only intervening on two
occasions in total. The first time, while our friend was hit by a rock to the neck in front of their eyes, they took him into their police car for less than a minute, then let him go. Another striking event was when a drunk man arrrived with a packet of fireworks, the police confiscated a few of them and then let him approach the house with the rest. Indeed they went so far as to hang the protestors' banner on the fence, and some of
them were laughing as our attackers showed their joy when the stones hit their target. The police allowed the protestors to come right up to the gates of the house, while they stood watching a metre behind.

The police left a few minutes after the last protestors and, five minutes later, a white pick-up truck parked at the corner of Rue Aristide Brillant and Rue Haut-Champs. Two men got out and walked towards us, then t asurned away as the police briefly drove past. The two men then returned with Molotov cocktails (beer bottles) in their hands, which they lit in front of the bus stop. One of the molotovs was thrown onto the roof. Fortunately
it did not catch fire, but then they threw another which rebounded off the side of the bus stop and landed in the garden where it burned. We called the police to report the attack, they refused to listen and demanded to
know our identities.

After one of us explained that he could tell them everything that happened, and could describe the attackers' vehicle, but wanted to stay anonymous, the police left. One of us went into the garden to find the debris of the molotov cocktail. A police car drive past again and he tried to show them the evidence, but they only shone their torches in his face, refusing again to record the event. We wait with much apprehension the days to come. After the molotov attack, what next?

Local Calais media are reporting the demonstration of around 50 racists continued through Sunday. The fire brigade were called after a group of men were spotted nearby by neighbours with jerrycans of petrol to prepare more molotov cocktails.

1. Shut down the fascists' Facebook page: Go to the page and click the flower icon next to the Message button to report it for harassment/threatening behaviour. If enough of us do it, it might just work!

2. Share this info on social media; get friends to report the FB page too.

LATEST: report and new call-out after fire at Coulogne

CALAIS: CALLOUT TO HACKTIVISTS AND EVERYONE FOR ANTIFASCIST SOLIDARITY.

Calais, North of France, 25/2/2014. Addressing antifascists, hacktivists, and all concerned people. After the arson by fascists of the occupied farmhouse in Coulogne, we urgently need your support to see off a surge in neonazi violence.

For years the situation for migrants in the French port town of Calais has been harsh. They face constant police repression and harassment, and increasingly now also attacks from non-state fascist groups, particularly the neonazi gang "Sauvons Calais" (Save Calais).

Calais is the main French port for crossing the English channel to the UK. Several hundred refugees and undocumented migrants (mainly from Afghanistan, Iraq, Syria, East Africa and other war zones) are stuck there at any time, trying to cross by any means such as hiding in goods trucks or under trains. Deaths are frequent: four people have been killed so far just this winter. Fatal accidents trying to cross are compounded by police attacks including beatings, repeated arrests, theft and destruction of tents, sleeping bags, food and belongings, etc.

Recently the level of violence against migrants, and also towards people of the 'No Borders' movement who stand with them in solidarity, has been mounting. The escalation began last October when the right-wing Mayor of Calais, Natacha Bouchart, called for residents of Calais to report migrants occupying abandoned buildings in the town. The mayor's call was taken up by a new anti-migrant group called "Sauvons Calais". Representing themselves as concerned citizens without political affiliation, the group is in fact closely linked to neo-nazi and far-right movements including Front National and Generation Identitaire. Its spokesperson Kevin Rêche is a neonazi with a swastika tattooed on his chest.

In recent days Sauvons Calais led an attack on a farmhouse in Coulogne, a suburb of Calais, squatted by homeless people (in fact, in this case, the occupants were not 'migrants' but homeless French nationals). On Saturday 22 February the fascists gathered more than 80 supporters outside the house. From the afternoon until 1 am the mob attacked the house with stones and later with molotov cocktails, destroying the windows and roof and eventually burning down one of the out-buildings. During the most violent period Sauvons Calais held a 'buffet' outside the house offering food and coffee.

French police were present throughout the assault. The inhabitants of the house wrote in a statement:
"The police were notable in their passivity, only intervening on two occasions. The first time, while a friend was hit by a rock to the neck in front of their eyes, they took him into their police car for less than a minute, then let him go. Another striking event was when a drunk man arrrived with a packet of fireworks, the police confiscated a few of them and then let him approach the house with the rest. Indeed they went so far as to hang the protestors' banner on the fence, and some of them were laughing as our attackers showed their joy when the stones hit their target."

In short, we are seeing a situation that is all too familiar for anyone who has studied history or been following recent events in Greece and across Europe. State authorities (politicians and police) are working hand in glove with extra-legal fascist gangs attacking and intimidating "foreigners", homeless people and other outsiders, and their supporters. Are we going to let this become an everyday reality in Calais? And after Calais, where next?

The attacks eventually led to a fire which burnt down one of the farm buildings. Fortunately, no one was killed or hurt. After a week of siege, the inhabitants of the farmhouse have now been forced out by fire. But with several hundred migrants and other homeless people sleeping rough and in deserted buildings in Calais, this story is certainly not over. Next time the consequences could be far more serious.

The demonstrations against the house were coordinated via two web pages, administered by active members of the group "Sauvons Calais". These pages are also a window on their ideology, showing links with active and well-known fascist and neonazi movements across France.

https://www.facebook.com/page.sauvons.calais
This was used to organise the demonstrations at the farmhouse. It is also full of fascist individuals posting death-threats and appeals to violent action against migrants and "No Borders".

The other is a blog administered by the same gang:

We invite all individuals and groups in solidarity to contribute to the struggle against these fascists and racists. Come and join "No Borders" in Calais, or get in touch to help make a strong alliance against fascism in France and beyond. Or take action in your own ways, following your own ideas and talents.

Here are just a few ideas that have been suggested, but please come up with your own ideas too:

** A demonstration "for tolerance and solidarity" will be held in Calais on Saturday 1st March, 2.30PM in the main square Place d'Armes, called by anti-racist residents of the town. Please come along, or help spread the word. Further information here:

** The facebook and blog of Sauvons Calais should be taken out of action along with other sites of their Nazi friends. Numerous people have reported the Sauvons Calais page to facebook for harassment and threats (to do this, click on the flower next to the 'message' icon). Facebook have refused to take the page down. If you know other ways to help, please do.

** Finally, we remember that the struggle against borders, and against a world of controls, surveillance and oppression, does not stop with particular fascist gangs. We equally invite you to take action wherever you are against all those who are part of the construction of this totalitarian world, including the French and other governments, the European border police force Frontex, mercenary corporations such as G4S, Serco, Mitie and others who run migration prisons and border controls, and all those individuals and companies who profit from their actions.

http://luttennord.wordpress.com/2014/02/22/sauvons-calais-les-miliciens-sont-dans-la-rue/ (detailed expose of the fascists in Sauvons Calais, in French)