Andrew Clarke and Geoff Sheppard were convicted of planting incendiary devices at Debenhams stores in Romford and Luton in 1987. An undercover police officer allegedly planted a third device at a branch in Harrow to help convict the men. 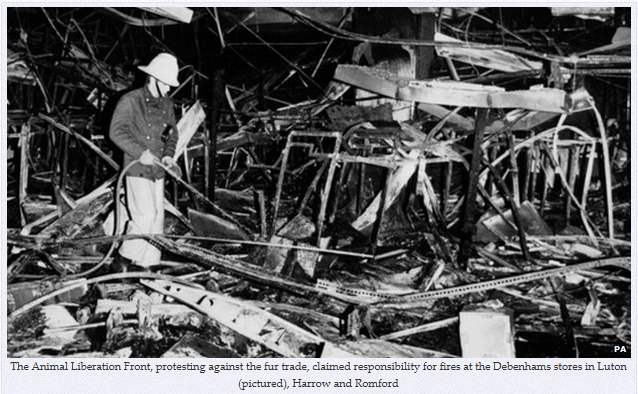 The officer has denied this and said he would not have committed such a crime.

The two activists, who were members of the Animal Liberation Front (ALF), have claimed they were victims of a miscarriage of justice.

They were convicted over the attacks in Luton and Romford, which it was claimed were staged by members of the animal rights group to stop Debenhams selling fur.

Andrew Clarke was sentenced to more than three years in prison in June 1988, and Geoff Sheppard to four years and four months.

Mr Lambert has admitted to infiltrating the ALF. At the time he was a senior officer in the Special Demonstrations Squad (SDS), the same undercover unit which infiltrated the Stephen Lawrence campaign.
‘Miscarriage of justice’

The jailed men’s appeal to have their convictions quashed comes after Home Secretary Theresa May asked Mark Ellison QC on Thursday to identify specific cases where the actions of undercover officers may have caused miscarriages of justice.

It is not known if Mr Ellison, who wrote a damning report on the original police investigation into the Stephen Lawrence murder, has identified the ALF activists as one such case.

Mike Schwarz, who represents Mr Clarke and Mr Sheppard, said it appeared a miscarriage of justice had taken place.

“In the light of the announcement by the home secretary, Mark Ellison QC and Operation Herne on March 6th, we plan to renew those representations and, in the absence of the co-operation of the Crown Prosecution Service, start appeals on behalf of our clients.”

Operation Herne is the name of the investigation by Derbyshire Chief Constable Mick Creedon into the use of undercover officers by the former Special Demonstration Squad.

Mr Schwarz said there was “some evidence” to suggest that an SDS officer played a “key role” before, during and after the events that led to his clients’ convictions.

“The case raises deep concerns not just that my clients spent a long time in prison when they should not have done so, but also, more broadly, about questionable undercover police practices over the last decades,” Mr Schwarz added.

“It is hoped that the police will finally be open about and account for its actions.”

When allegations about Mr Lambert were made in 2012, he said: “It was necessary to create the false impression that I was a committed animal rights extremist to gain intelligence so as to disrupt serious criminal conspiracies.

“However, I did not commit serious crime such as ‘planting an incendiary device at the Harrow store’.”

Approached for comment on Friday, he told the BBC he had nothing further to add.

The home secretary announced on Thursday that were would be a review to determine whether decades of secretive undercover police work had led to any miscarriages of justice.

The top-secret SDS was in existence for nearly 40 years, during which time police moles infiltrated hundreds of protest groups.