Week of Action : Police Spies Out of Lives

THE BATTLE AGAINST SECRECY CONTINUES

This is the hearing which was postponed from last November, and involves a fresh fight against secrecy. 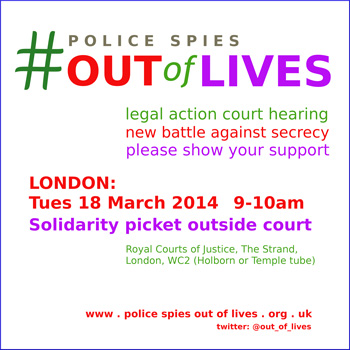 Five of the women will face an attempt by the police to have their common law claims struck out. The police claim as they can ‘neither confirm, nor deny’ (NCND) anything about undercover policing, the trial should not proceed.

These are the common law claims of “deceit, assault, misfeasance in public office and negligence” made by the women who were deceived into long-term intimate relationships with undercover officers.

WHAT CAN I DO? (see below for details of each action)

Picket outside Royal Courts of Justice
Gather with your friends in solidarity
Support us on social media
Sign up to the supporters’ email list
Add your name to the ‘Where We Stand‘ solidarity statement
If you are a journalist or blogger, write articles about the case and ask to be added to the press list

GATHER WITH YOUR FRIENDS / COLLEAGUES
We are asking people to gather with your friends during the week of action, in public or at home, to send messages of support and as an act of resistance. Undercover policing is attack on the trust built within friendship groups. Therefore, by coming together in solidarity with the women challenging these destructive police tactics you can both demonstrate your support and resist within your own networks.

Consider coming together to:

Organise a mass letter / email writing to local and national papers – while sharing a meal.

Distribute PSOOL leaflets to raise awareness, on a busy high street or other appropriate location.

Discuss within your groups the possibility of giving official support to the Where We Stand support statement – showing collective resistance against the intimidation of campaigners for social and environmental justice.

WHERE WE STAND
Sign up, and ask your friends to sign up, to the ‘Where We Stand‘ solidarity statement.

PRESS LIST
To ask to be added to the list please email: contact#@#policespiesoutoflives.org.uk (removing hashtags which are there to prevent spam)

The police will argue that the claims should be struck out because their asserted “Neither Confirm Nor Deny” policy prevents them from answering questions, disclosing any documents or giving evidence, and therefore they say they will be prevented from having a fair trial.

The police are also applying, in the alternative (i.e if the strike out application fails) for orders: 1. releasing them from standard disclosure obligations (so they don’t have to provide any documents to the claimants or their lawyers), and 2. that the identities of each claimant and each police officer and each witness in the proceedings must not be disclosed.

This hearing comes after the three other women in this legal action had to battle for over a year against their human rights claims going to a secret court; to widespread dismay, the Court of Appeal found against them in November 2013, and their battle continues.

Police Spies Out Of Lives extends solidarity with everyone affected by the extreme intrusions perpetrated by undercover police officers.