Anti-militarist activists have blockade a NATO conference at a stately home in the Sussex countryside. 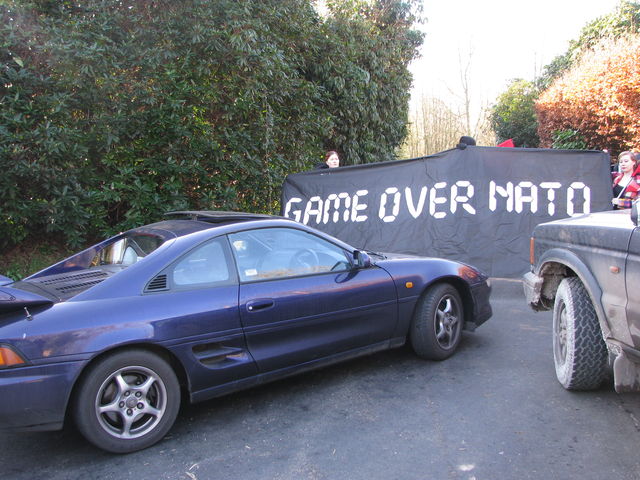 Anti-militarist activists today blockaded a NATO conference at a stately home in the Sussex countryside. Meanwhile, banners were hung off road bridges close to the venue to greet delegates as they arrived at Wiston House in Steyning.

Protesters succeeded in blocking the front entrance for more than an hour, leading to chaotic scenes on the A283, as cars queued to get into the estate.

An event official told protesters: “If you stop the event from happening, delegates won’t be here to see you protesting so you won’t get your message across to them!!”

Activists also picketed the rear entrance, with police being forced to escort cars into the conference. One protester was arrested and roughly handcuffed by three large policemen for reasons which are unclear.

Leaflets were also handed out to locals in Steyning town centre, where the campaigners were followed by intelligence gathering police.

Official-looking person wondering how he will get into the conference

Picketing the back entrance with Wiston House in the background. Sussex countryside is so beautiful but can only be enjoyed by the bourgeois few

NATO is holding a “Post 2014 Strategic Narrative Conference” from Monday 17th to Wednesday 19th March. Its aim is to set the agenda and content for the 2014 NATO Summit, in Newport, Wales, in September.

NATO’s “strategic narrative” is essentially the lies with which it aims to hoodwink the public and justify its next imperialistic invasion. The conference’s official website even admits that it is planning “the elements of a proactive communications strategy to convey NATO’s post 2014 strategic narrative and validation of the utility of military force to member state politicians and publics.”

Michelle Tester of Smash EDO said: “some of us have visited regions that have been targeted by NATO. We have seen buildings devastated by bombings and we have met local people who have lost friends and family. We oppose the demonisation by western governments and the media of people from countries that are the victims of NATO’s invasions.”

Activist group Stop NATO Cymru, part of the Anarchist Action Network will be mobilising against the NATO summit in Newport in September.