Resisting Together is an event of many ideas focussed on a single aim – the dissolution of Industrial Civilization through acts of resistance. There are many activists – community, political, radical individuals, groups and movements – operating both in the open and underground; we don’t agree on everything, but at our core we all seek to free humanity from the yoke of the industrial machine, the horror-play that the civilized world acts out every day, degrading the natural world and enslaving people in the pursuit of material wealth and power. 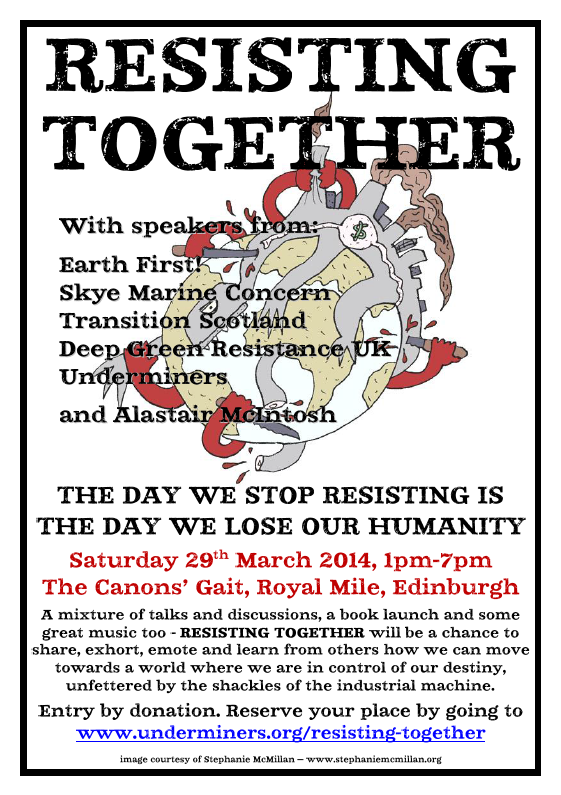 Cost: by donation at the event

A mixture of talks and discussions, the launch of the book, "Underminers" and probably a bit of music too, Resisting Together will be a chance to share, exhort, emote and learn from others how we can move towards a world where we are in control of our destiny, unfettered by the shackles of the industrial machine. This unique event seeks to bridge gaps and find commonality between the various strands of radical thought and action that are seeking to protect the future from ecocide. The range of topics, groups and ideas represented is deliberately broad, and there will be ample opportunity for you to add your own thoughts to the mix. We need it all.

Booking is essential - if you wish to come, please REGISTER via the website:
www.underminers.org/resisting-together

Adam Herriott has worked as a Parliamentary Manager for the legislators organisation GLOBE International/UK. He has been involved in Transition Brixton and Edinburgh. He has volunteered at a number of organic farms and intentional communities around the UK, and also lived at an eco intentional community in SW Wales. He has studied Permaculture with a particular interest in People Care. He is the Deep Green Resistance UK coordinator and is involved in anti-nuclear and anti-biofuels campaigns in and around Bristol. He currently works for a local organic veg box scheme in Bristol.

Lou has been a member of Deep Green Resistance UK for nearly a year now. She studied environmental education and science. She has worked with UNESCO on a local Biosphere reserve in the past, amongst other things. Lou is currently involved with local food resilience and local currency campaigns.

Eva Schonveld has been involved in community work for many years. She was an enthusiastic founder member of the local Transition group in her home town, and helped set up community food growing spaces and a local market there. She also had the opportunity from 2009-11 to support communities around Scotland who wanted to use the Transition approach, and still loves to do so given the chance! She’s passionate about the need to build a resilient, fair and truly sustainable food system and is now working for Fife Diet, a local eating project.

Indra’s been with Earth First! for over 20 years, an activist for 25 years and an Anarchist her whole life. Involved with anti-motorway camps in the 90’s, countless other environmental campaigns, arrested 9 times including by the Counter Terrorism Unit, raided and infiltrated. Indra, a single mum, studied Social History in Brighton, became a development worker, started a pirate radio station and an activist sailing co-op. Still deeply passionate and entrenched in the Environmental movement, she now supports eco Housing co-ops where she lives in Derbyshire.

A piece of paper says I’m a Master of Science, specialised in ecology and environmental biology. My heart says I didn’t really learn about ‘nature’ until I immersed myself in it to try and become one with it. Sevestre means ‘of the woods’. Born in overdeveloped Holland, I’m on my way back to the woods. I moved to Skye in 2008 and am trying to help build a permaculture woodland community. Being part of a community is to defend it, and the community where I live needs urgent defending against, amongst many other things, salmon farming.

Alastair McIntosh is a Scottish writer, academic and activist.He was brought up in Leurbost on the Isle of Lewis and now lives in Govan. He is involved with Scottish land reform especially on Eigg, where he helped establish the Isle of Eigg Trust, and campaigned successfully against the Harris superquarry in Lingerbay. He is a fellow of the Centre for Human Ecology, an Honorary Fellow of the Schumacher Society, and helped to set up the Govan based GalGael Trust, an organisation which provides learning experiences anchored in practical activities that offer purpose and meaning to less socially advantaged people.

Alastair will lead a discussion on Community Resilience after his talk

Keith Farnish is a writer, volunteer and activist who, in a former life, was economically viable. He lives in southern Scotland with his wife and two children, making, growing, organising, listening, talking and being. His first book, “Time’s Up! An Uncivilized Solution to a Global Crisis” was put online for free in 2008, and published in 2009. His second book, “Underminers” was completed in October 2012 and, again, put online for free in the expectation that no publisher would be brave enough to touch it. Unexpectedly, it was released by New Society Publishers in 2013.

NEXT STEPS : ACTS OF RESISTANCE
A floor discussion facilitated by Sandi Hunter

Sandi is a long-time activist, campaigner and mother of two fully-grown people, who has recently cast off her settled existence for a possession-light life somewhere in Britain. Originally from South Africa, she was until very recently an inhabitant of Edinburgh.