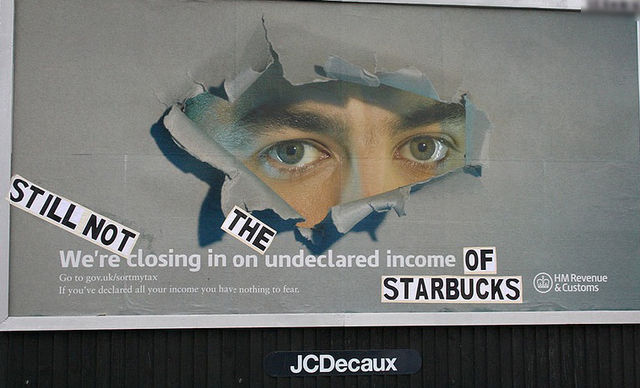 HM Revenue & Customs billboards which pretend HMRC give a damn about undeclared income are part of a highly political campaign to intimidate the general public. HMRC adverts pretend they're cracking-down on tax dodgers, while HMRC are laying-off tax inspectors, and doing so at a time when the basic infrastructure of society is being undermined by eg - hospital cuts. The Coalition pretend cuts are needed to reduce gaps between spending and tax revenue - they pretend cuts are needed because they say they're broke, while they're doing LESS, rather than more, to collect from multinationals and corporate tax-dodgers.

These HMRC adverts serve 2 purposes. First is to respond to public outrage at them helping the super-rich, by promoting the false impression they're doing more about tax-thieves. Second is to encourage the public to think crack-downs on these huge multi-national and multi-billionaire corporations and companies would be the same as crack-downs on ordinary members of the public (on the relatively miniscule amounts of cash income that might be earned by some self-employed sole-traders, etc).

In other words, when UK Uncut and other campaign groups call for the hyper-rich to contribute to the cost of the taxpayer-funded services and infrastructure that their businesses exploit, instead HMRC's Coalition masters want the public to think such campaigns threaten ordinary members of the public.

Billboard sites like these cost corporations thousands of pounds per week to rent, and corporations pay those thousands because they know advertising's effective. Dozens of billboards like this have been modified, effectively costing the advertisers a fortune in wasted PR costs, and taking straightforward messages about cuts and privatisation out to tens of thousands of people.