As had been previously announced on interzonevoices.wordpress.com, on Friday the 28th of March a group of 12 to 15 protesters went to the Spanish consulate in London’s West End to protest the recent murders of dozens of Sub-saharan African migrants trying to enter the Spanish colonial enclaves of Ceuta and Melilla on the North Coast of Morocco. The Spanish Guardia Civil were responsible for these murders, according to eye witnesses. 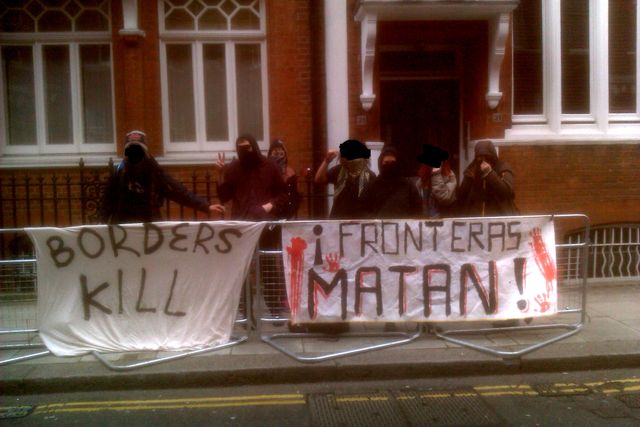 the banners with same message in english and spanish 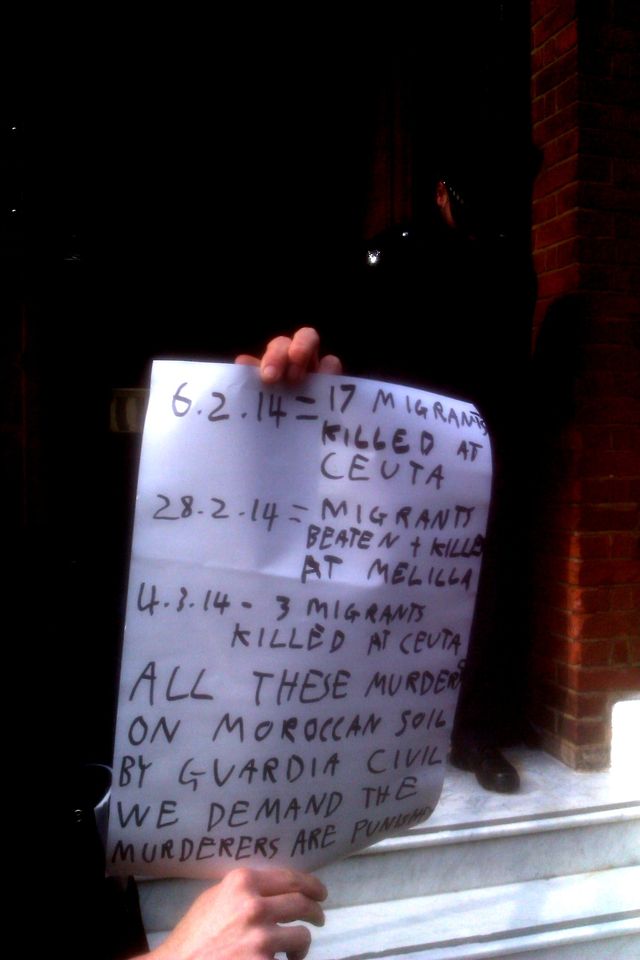 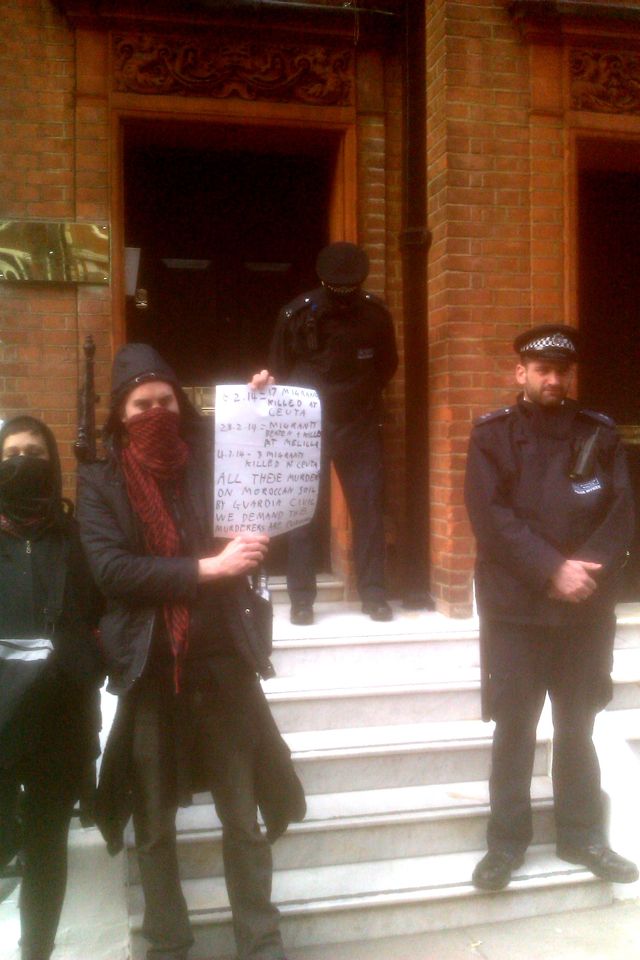 holding up message while police block door of consulate 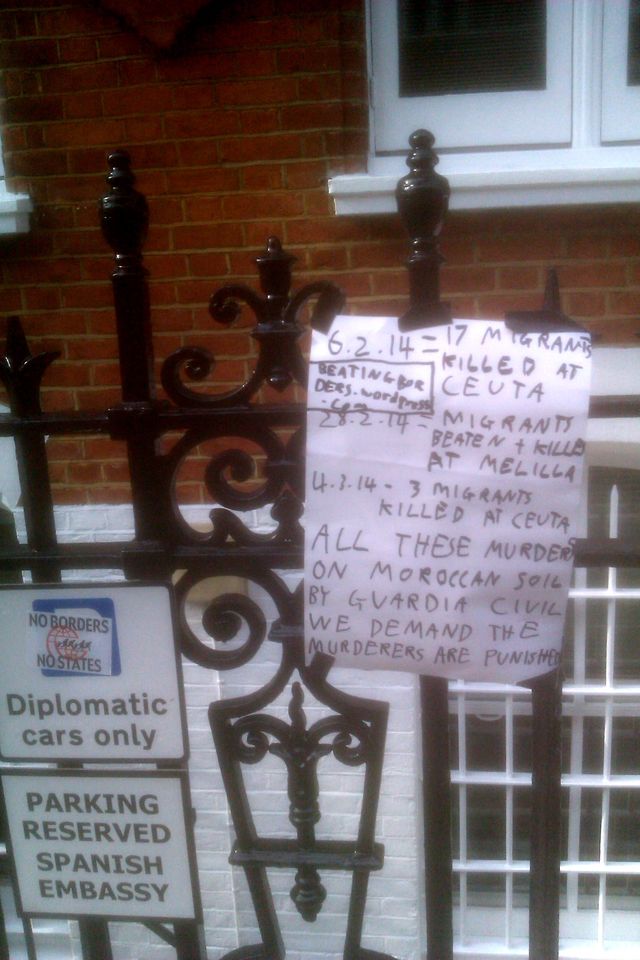 The message left behind 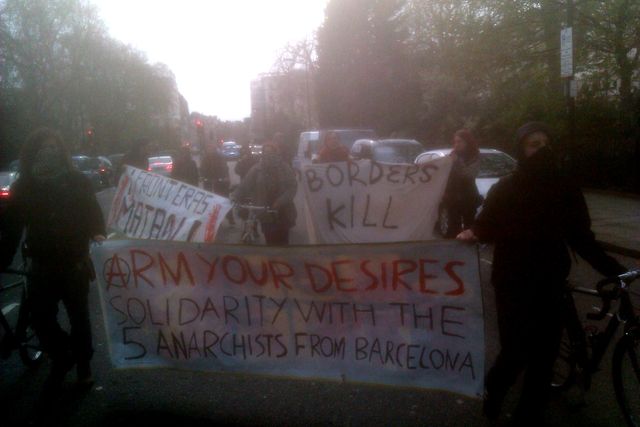 Marching from Consulate to Embassy

(To read about the recent atrocities see these articles:

The aim of the demonstrators, as they made clear to the police numerous times, was simply to pass on a message to the consulate staff, so that they would in turn pass a message on to their superiors. The message was that the Spanish State should bring the Guardia Civil officers guilty of recent murders of Sub-saharan migrants on Moroccan soil to justice.

The demonstrators were not asking for much, simply that representatives of the State of Spain might take perhaps five minutes to hear a complaint about serious breaches of international and national law that the Guardia Civil was guilty of. However, they were told numerous times by the Metropolitan Police officers that they would not be allowed to enter the building, and that no-one from the consulate staff was prepared to come out to talk to them either.

They also requested many times that demonstrators keep behind the fences that they had set up especially (pictured above) but as no superior officer was present to invoke section 14 of the Public Order Act, the demonstrators of course did not comply with this request. When a police sergeant finally did arrive he told the protestors that he could not be bothered to invoke the law because he would have to then call more police officers to enforce it.

One protestor did manage to enter the building by pretending that they were not part of the demonstration and passed on the message to a member of the staff, but was informed that this member of Staff had no intention of passing the message higher up.

In the end the protestors decided to write their message on a piece of paper and hold it up so that the public could see that the police were refusing to allow them to deliver it, before leaving it taped to the fence of the Consulate. The protesters stayed outside the consulate shouting slogans in Spanish at the staff inside, such as “stop killing migrants” and “down with the murderous fences and borders”, until half an hour after the consulate was already closed to the public.

After having been at the consulate for over 2 hours still without having achieved a basic recognition from any Spanish diplomatic staff that there were people protesting against murders that the Guardia Civil had carried out, the demonstrators decided to take more militant action by marching in the middle of a main road with their banners to the main Spanish Embassy, which was not too far away. As they marched they chanted in English to the passers by “No Borders, No Nations, Stop Deportations”. One of the banners was also drawing attention to another injustice carried out by the Spanish state: the imprisonment of 5 Anarchists in Barcelona on trumped up charges.

At the main Embassy the main door was locked, but the protesters managed to enter anyway by simply ringing the doorbell! Inside were a group of Spanish Embassy staff included one uniformed member of the Guardia Civil.

The demonstrators carried on chanting their slogans and demanding that they contact their superiors and pass on the message demanding that the murderers in the Guardia Civil be brought to justice. This the embassy staff refused, saying that the protestors should write a letter instead, as if that would be quicker than the staff themselves simply making a phone call then and there.

After a few minutes several Metropolitan Police constables armed with hand-guns arrived and forced the protesters to leave the building. One protester non-violently resisted but was forced out anyway. Once outside the Metropolitan police refused to answer basic questions such as why they had entered the embassy (thereby entering Spanish territory and leaving their own jurisdiction). This was ironic given that one of the crimes of Spanish Guardia Civil that the demonstrators were trying to draw attention to was that they had also left their own jurisdiction in order to beat and kill migrants on Moroccan soil.

Despite the Guardia Civil officer in the Embassy claiming that his bosses would come and talk to the protesters so long as they left the building, this of course did not actually happen, and eventually the protesters called it a day after having been on the streets for 4 hours and having been manhandled by police. Luckily no-one was arrested.

It was clear that from the beginning the Metropolitan police were ordered to prevent the protesters passing on their demands to anyone from the Spanish Embassy or Consulate staff, despite the fact that these are public buildings normally open to anyone wanting to use their services.

Peacefully protesting outside the consulate did not work, so the tactics were escalated to storming the embassy by surprise in order to talk to Staff, who still refused to talk to their superiors. However, the fact that the demonstrators refused to leave until armed Metropolitan police forced them to ensured that the senior officials at the Embassy definitely would have to be informed of the demonstration and what it was about.

The Spanish state can not ignore the fact that they will no longer be allowed to enter other countries’ territory and murder innocent people without people in the rest of the world knowing about it and forcefully letting their objections be known.