Day of Protest against ATOS & DWP. Report from Wrexham

Today, 1 April, has been called as a further day of action against ATOS and the Department for Work and Pensions. I decided to lend my support to the call for an end to the notorious work capability assessments that force disabled people to seek jobs that don't exist, and to the genocidal government policy of cutting off benefits and leaving claimants without the means of survival. 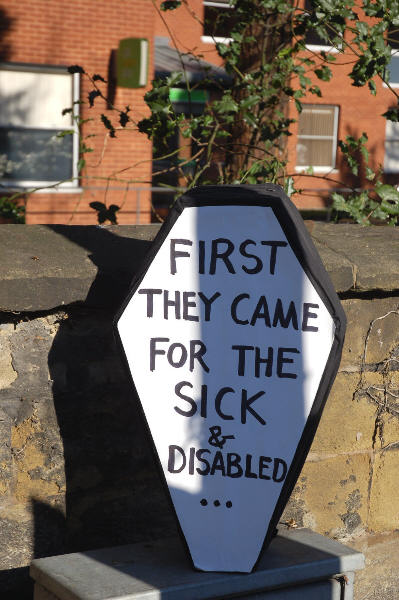 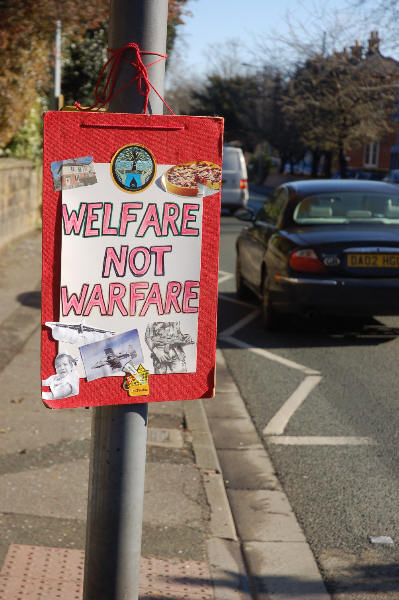 Calling for welfare not warfare! 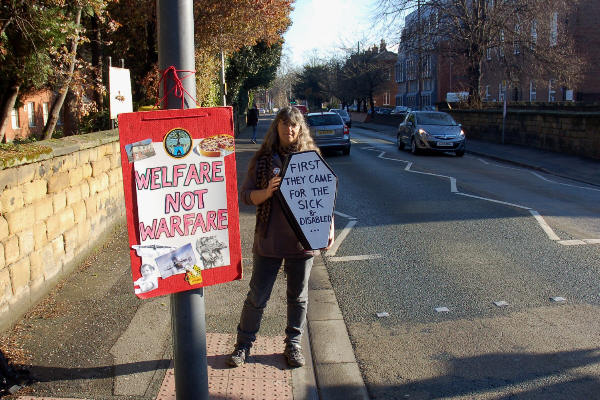 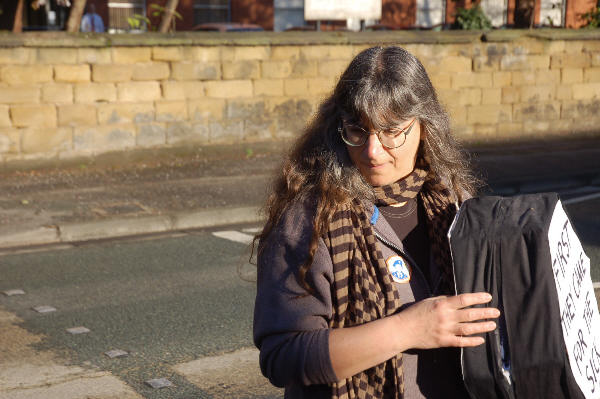 Stop the government's genocidal policies against the sick, disabled & unemployed

PAC supports the organisers of phase 2 of demos against ATOS and DWP.

ATOS may have run away from the WCA contract, but they have plenty more contracts funded by public money from this unelected Government, including the disastrous PIP contract, in which people have been waiting for up to 10-12 months to obtain support. The DWP continue to oversee the round of cuts impacting on disabled people leaving them destitute or dead, sanctions are at an all time high.

The facebook page link wasn't promising, especially the statement that they were 'recruiting leaders', but I'd been told it was happening and a similar event in February at the same spot seemed to have been supported. I was disappointed to find myself on my own outside the DWP (Doom for the Weak and Poor) in Grosvenor Road during the morning rush hour, but as I had a couple of props and time to kill, I reckoned that my lone presence would be better than nothing and decided I might as well stay.

Having attached my placard to the traffic lights, I stood holding the coffin and facing the oncoming traffic, periodically using the 'green man' on the lights to slowly walk across the road and alert drivers to the message: 'First they came for the sick and disabled' and the one on the placard: 'Welfare not Warfare'. The government always finds plenty of money to spend on killing people in other countries or on the nuclear weapons that threaten all life on this planet. Most drivers took this with good grace, some waved and beeped, and only a couple indicated their annoyance at this minor inconvenience to their progress. Just as well because people are dying. There should be major inconvenience until everyone is guaranteed as an absolute minimum the means to stay alive and keep a roof over their heads. Just last week, the government admitted that it should not have declared Mark Wood, who was a vulnerable man with Asperger's Syndrome, fit to work and cut his benefits. Mark went on to starve to death.

Around 9am, a reporter from the Wales Daily Post turned up and took a few pictures (on my camera as well as his own), interviewed me along with a woman who came over to offer her support after signing on at the Jobcentre, then went on his way. I stayed until 10am when, deciding there was no chance of anyone else showing up, I called it a day.

In memory of Mark Wood and all those who have perished as a consequence of government failure to protect them. Shelter and sustenance should be fundamental human rights. That they are not is an indication of just how uncivilised we really are.