Esther to be rehoused! Solidarity works

On Monday morning over 20 people descended on the offices of Metropolitan Housing in Lambeth to insist that the Association finds appropriate housing for Esther. 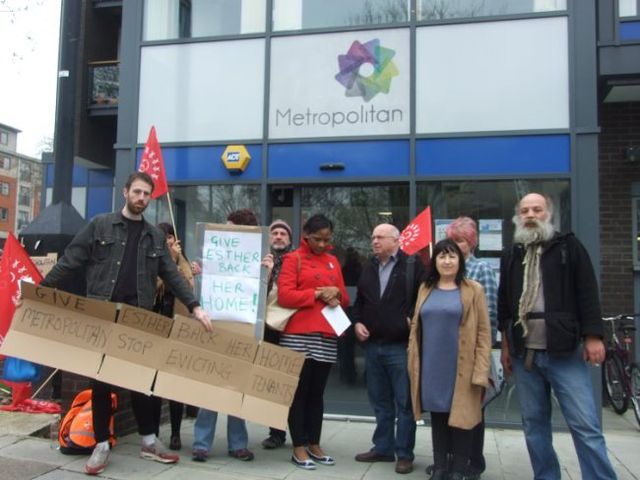 Esther is a pregnant single mum, with a school going child who had been living in a Metropolitan Housing flat as an assured shorthold tenant. The HA is planning on demolishing the block which still has a number of people living in it. Esther was served with an eviction notice and complied with it. She was then given temporary housing in Hackney. This meant Esther had to get up at ridiculous o'clock to get her child to school each day.

Although the HA insisted that legally Esther was no longer their responsibility, we insisted that as a social housing agency they did have responsibility for their tenants. Eventually the HA agreed to meet with some of us and Esther. They agreed to find Esther housing in Lambeth by Friday. We told them we would back in force on Monday if they failed to do so.

Esther and her family have now been offered the choice of 2 flats in Lambeth!

This is great news and shows that if we band together we can challenge injustice and bring about change for the better.

People in Southwark are in the process of setting up a space where people who have been sanctioned, lost their benefits, face eviction or are suffering other injustices can go, and from where we can begin to challenge the people who are making these decisions and causing such hardship. We feel that is a vital part of undermining the whole welfare reform and austerity agenda.

The space will be called SolidariTEA, and will open within the next 6 weeks. watch out for us. Come join us and lets start challenging therse injustices together.