Over 100 people took to the streets of Hull today in a mass demonstration against the Bedroom Tax. 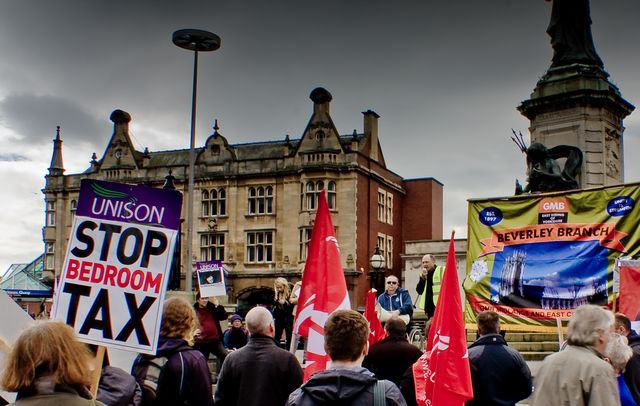 Cllr Shelagh Finlay is the Labour East Riding County Councillor for Bridlington South, one of the most deprived Wards in the UK. Speaking to the demonstration she said,“We asked the Tory led Council to mitigate the appalling excesses of this tax but in January of this year, and despite all the data and individual cases of hardship the Tories voted against Labour’s motion to help my residents. They are hurting”.

Cllr Gill Kennett who represents Holderness Ward on Hull City Council said, “We cannot wait until 2015 and the election of a Labour Government. Our surgeries across the City are inundated with residents being forced into rent arrears and having to access cash to feed their kids from the leeches of pay day loan companies. We call on Labour Councils all over the UK to commit to never evicting residents who fall behind with their rent due to this malicious tax”.

“Today’s events in Hull and in other UK cities give us hope”,said Hull People’s Assembly Chair Sarah Hemingway.“Despite all that has been thrown at working people, we are still standing and we will never give in until this despicable Government is driven from power. Labour must realise we not tolerate more of the same. We will not give up and we will fight tooth and nail for justice and a Government that we can be proud of.”

Martin Deane from the Green Party re iterated that that just because Labour is committed (after six months of moral vacillation) to abolishing the Tax, this does not signal that the fight is over. Martin paid tribute to doyens of the left Bob Crow and Tony Benn reminding us of the huge fight we have on our hands. The Tories are setting fires all over our Society.

The TUC were represented by Phil Sanderson who described the decimation being wrought on the working class by the Tory Government of millionaires in London. “We are the sixth richest nation on earth but we have widespread use of Food Banks which is a total scandal”.

Many thanks to organisers. who included Dermot Rathbone, Sarah Hemingway, Nikki Osborne, and Adrian Kennett, and to Peter Pollard and Sophie Kitching for their photography. UNITE the Union, UNISON, the GMB, the Green Party, the Labour and Co Operative Party and the TUC were represented as well.