This 5 April 2014, around 40 Hitler-worshipping berks attended a "White Pride World Wide" demo in Swansea. An estimated 7,000 people protested against racism in London, this 22 March. 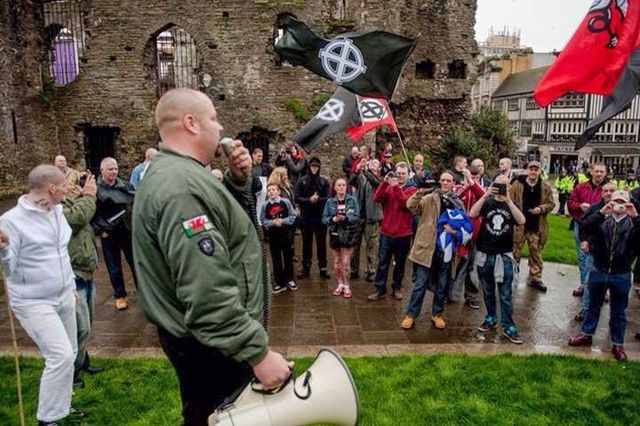 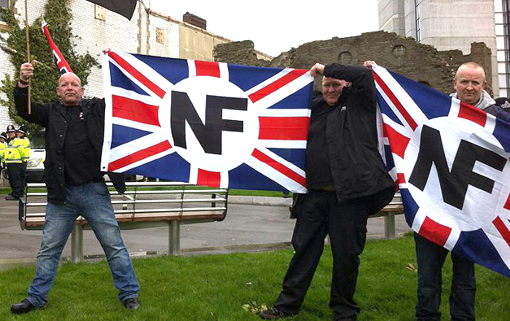 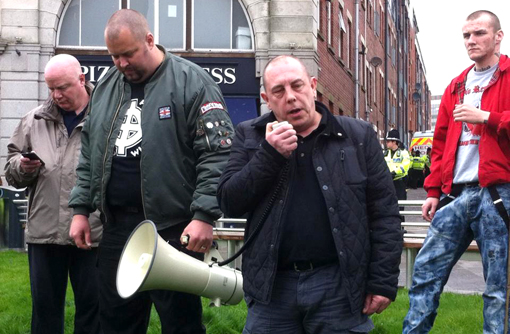 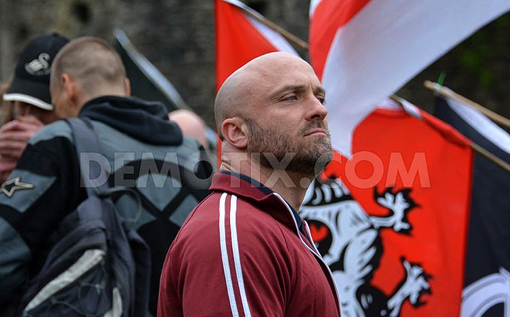 With my chin, and baldy head, us Nazis will rule the world

Over the last 15 years or so, Plan A for the far-right in Britain was, in electoral politics, the idea of getting the BNP's first MP elected, by pretending the BNP aren't Nazis. That failed. Switching their strategy to protest politics, Plan B for the far-right was the idea of building-up a powerful street-movement, by pretending the EDL aren't Nazis. That failed. Plan C was to pretend a host of tiny EDL splinter-groups (from Casuals United to the March for England) aren't racist either. That failed. Plan D was finally to copy the Golden Dawn in Greece, by (for a change) openly stating their Nazi beliefs, and seeing whether that might work, hence the "White Pride World Wide" demos in Swansea in 2013 and 2014. Did that also fail?

In 2013 less than 100 racist knuckle-draggers came to Swansea, stood around in front of police snappers and anti-fascist photographers for a bit, then, even more helpfully, posted pictures of themselves on social media, providing a minor intelligence bonanza for the anti-fascist movement. The fruits of these Nazis' stupidity is available here...

Wise to the extent that their 9 March 2013 demo had harmed themselves, in 2014, this April 5, most of the Nazis who'd attended in 2013 stayed home, leaving around 40 Hitler-worshipping berks to heed their Fuhrer's call, and apply the time-honoured Fascist strategy of trying to make a poorly-attended demo look a bit less embarrassing by flying lots of big flags. In contrast, an estimated 7,000 people, from all different social, ethnic and political backgrounds, came together to protest against racism in London, 22 March 2014.

Of course there are more important battles than confronting a bunch of planks like the Swansea "White Pride" mob in the state they're in now, however; 1/ until the BNP were flattened in 2010, the far-right in the UK experienced years of constant growth, and it was critical to defeat these morons before their successes snowballed further, and before they could exploit the impact of austerity, 2/ taking-on the combined might of the vested interests who create austerity is a tough call, but wrecking the plans of the far-right was readily achievable (and very satisfying) 3/ Fascist groups across the world experience huge encouragement when their allies in other countries enjoy success, so opposing Fascism in the UK does a real service to people who are struggling against more powerful and more threatening Fascist movements overseas, 4/ as always, the bottom line - if we can't defeat Fascism when it's weak, we won't defeat Fascism when it's strong.

Despite huge (albeit indirect) encouragement from sections of the mainstream media, Fascist groups in the UK have failed to cross-over, and failed to sustain any long-term engagement with any significant section of society. Of course Fascism will never be completely stamped-out, and of course anti-fascists should never be complacent, but the various strategies of the BNP, EDL, NF and Casuals United etc have (for the time being) all decisively failed.