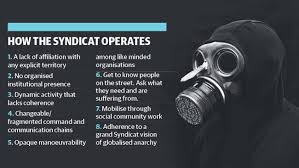 We the Black Rose Syndicat are proud to announce that Operation Kick Nazi Funk Fascist Fuck Arse is now under way in the former Ukrainian City of Odessa.

Currently based a Club Aura in Odessa in the newly liberated Autonomous Dniestrian Territory de jure of the Pridnestrovian Moldavian Republic the Black Rose Syndicat front group Ti Kallisti has been formenting trouble for the Western back Fascist Fuck Ukrainian rebel junta.

See our video uploaded on the April 1st when we launched Operation Kick Nazi Funk Fascist Fuck Arse as part of the New Greater Patriotic War against Fascism Fuckers.

"Get on the Inside and Turn It Inside Out"

Black Rose Syndicat or So We Like To Think