On Friday (2 May) over 150 detainees in Harmondsworth migration prison occupied the main courtyard in a sit down protest and began a mass hunger strike. On Monday (5 May) supporters held solidarity noise demos outside
Harmondsworth and simultaneously at Dungavel (Scotlans). Yesterday evening (Tuesday 6 May) protests started to spread to Colnbrook and Brook House migration prisons. 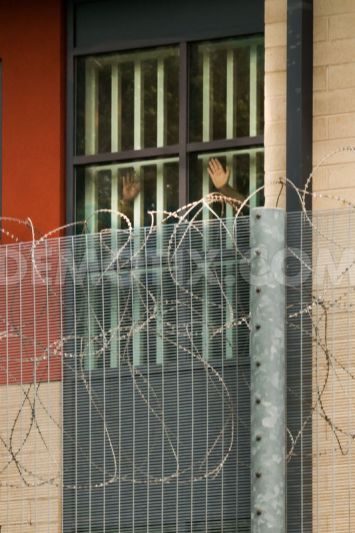 On Friday (2 May) over 150 detainees in Harmondsworth migration prison occupied the main courtyard in a sit down protest and began a mass hunger strike. On Monday (5 May) supporters held solidarity noise demos outside Harmondsworth and simultaneously at Dungavel (Scotlans). Yesterday evening (Tuesday 6 May) protests started to spread to Colnbrook and Brook House migration prisons.

At lunchtime on Friday 2 May over 150 people detained in Harmondsworth, the UK's largest migration prison run by corporation GEO group for the Home Office, staged a sit-down occupation of the main courtyard and began hunger strike. They issued a set of demands (see below) protesting against the ‘Fast Track’ system, under which refugees seeking asylum are immediately imprisoned before their claims are even heard, as well as
further mistreatment in detention.

The protestors stayed in the courtyard until the evening, when the Home Office sent 3 officials to meet with delegates of the protestors. The officials took a petition signed by all of the protestors, and said they would reply to the demands on Tuesday 6 May. The detainees decided to suspend their hunger strike while they waited for the response.

On Monday (5 May) solidarity noise demos took place at Harmondsworth and also at Dungavel detention centre in Scotland. At Harmondsworth, over 30 people made lots of noise with pots, pans, drums, whistles, etc. to let the detainees know they are not alone. The people locked inside waved and held up signs to the windows with messages such as 'Unlawful Detention' and 'No Healthcare'. There was also contact over the phone, and the prisoners said they were really glad of the support.

No big surprise, the Home Office broke its promise and still (1.30 PM Wednesday 7 May) hasn't given any reply to the protestors. Instead they have moved rapidly to issue deportation tickets to several dozen people
involved in the protest.

However, yesterday (Tuesday 6 may) the unrest began to spread. In Colnbrook detention centre, built right next to Harmondsworth, guards broke up an organising meeting of 40 detainees inside Colnbrook yesterday and put five ‘ringleaders’ in isolation cells, before moving them to another secure facility. Supporters have since been unable to contact the men.

Then at 10pm last night a group of 20 men detained at Brook House IRC near Gatwick staged a protest in the courtyard and refused to return to their cells.

The prisoners have been particularly asking for us to help spread their words and voices as widely as possible beyond the prison walls. They face a tough struggle ahead, and need our active solidarity.

Against all borders and prisons.

Here is the statement signed by all the protesting detainees in Harmondsworth on Friday 2 May and handed to the prison authorities:

As to resolve the following issues:

* Home Office fast track system [NB: system in which refugees are immediately detained whilst their asylum claims are processed]

* Healthcare in the detention centre

* Detainees are awaiting to travel to their home countries for months, without any response from the home office, when have agreed to voluntary return. One person has been waiting for 17months.

* People who were transferred from other centres on a promise for interview or high commission face to face interviews are still waiting to send back to their centre such as people from scotland are still stuck here without lawyers, guests.

* we are not getting enough legal help, in some cases no legal advice at all our important faxes and documents are waiting sometimes for four to five hours in the IRC office before they reach us.

* We need to resolve this face to face by the official immigration staff who record this complaint – this petition and peaceful protest- then we will consider to withdraw this hunger strike.

We are block C and D, and also A and B about to start peaceful protest and
hunger strike.

Some facts about Harmondsworth, one of Europe’s largest migration prisons:

On the killing in 2012 of detainee Prince Fuso and about GEO group:

An article on the Harmondsworth uprising in 2006:

On the ‘Detained Fast Track’ system of imprisoning asylum seekers: