World War I, a lost generation and conscientious objection

15th May is Conscientious Objectors Day and this year it's 100 years since the start of WWI. Mindful of these two anniversaries, I spent this afternoon visiting my friend the great anti-war campaigner Lib Rowlands-Hughes, who was born right at the end of the First World War and is now 95 years old, and learning a little of her family's history. This includes four uncles lost in the war, a military man turned pacifist and a conscientious objector imprisoned for resisting war. 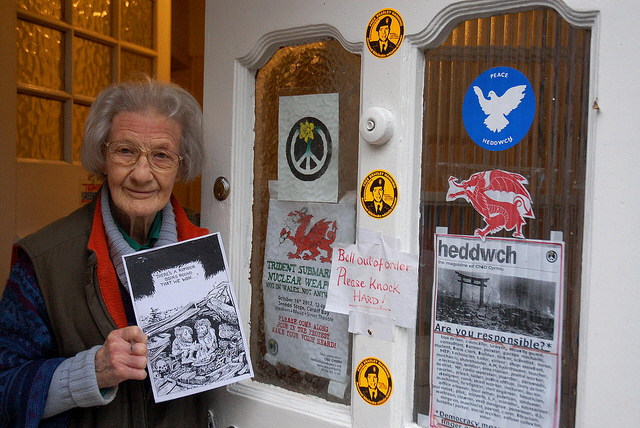 Lib grew up with four of her five uncles missing from her family, killed in the First World War. The fifth uncle had a weak heart and died while she was still a child.

Lib's mother Gwen was one of three children of Wrexham GP Dr. Edward D. Evans and his wife Lizzie. Both their sons, Gwen's brothers Cecil and Eric Evans, were killed in France or Belgium during the war. Lib reports that her grandmother Lizzie was unable to go with other mothers to look for her sons' graves after the war because she had to stay and help her husband who was busy with his patients and not in good health himself.

Lib's father Ieuan Lloyd Jones, son of David Lloyd Jones and his second wife Annie, lost two of his three brothers, Edward Wynne and Ifor Tomos Lloyd Jones, in the war. Edward Wynne was killed at Suvla Bay, Gallipoli in 1915 soon after he got there. His younger brother Ifor Tomos survived Gallipoli only to be killed just outside Gaza in 1917.

Stanley Lloyd Davies of Liverpool, the uncle of Edward Wynne and Ifor Thomas (their aunt's husband's brother), was with the brothers in Gallipoli. He looked out for young Ifor after Edward had been killed and brought Edward's watch back home for the family. His war experiences led to Stanley becoming thereafter a committed pacifist.

And a Conscientious Objector

Stanley's younger brother George Maitland Lloyd Davies was always opposed to conscription but volunteered in the military prior to the First World War. He had increasing difficulty reconciling warfare with his Christian beliefs however and registered as a conscientious objector when the war began. Along with Richard Roberts, George formed the Christian pacifist organisation Cymdeithas y Cymod (the Fellowship of Reconciliation), still going strong today. George was imprisoned a number of times for his conscientious objection, the first time apparently after his C.O. exemption was revoked when he began preaching pacifism on the streets of north Wales. He spent at least one stretch in Dartmoor prison.

In 1946, George M LL Davies published a book of Essays Towards Peace, which he dedicated to Edward Wynne Lloyd Jones, quoting in the book one of Edward's last letters home from Gallipoli, written the month before he was killed. This includes the words:

Is there any honest Christian who believes that the problems of life will ever be settled by force of arms? "Not by might but by my spirit" saith the Lord. For pity's sake keep one clear light shining throughout this terrible darkness. Surely Christ stands, as He always did, an eternal monument of peace and goodwill towards men.

All praise to those who are striving towards the dawn amidst the jeers and derision of a populace who play while Rome is burning. These are some of the thoughts which pass through my mind as I gaze on the eternal ocean.

All praise indeed, now as then.

Lib was an active member of the Peace Pledge Union from the late 1930s. Members sign a pledge:

I renounce war, and am therefore determined not to support any kind of war. I am also determined to work for the removal of all causes of war.

During the Second World war, Lib worked with evacuees (women and children) from the East End of London in a Quaker residential centre in south Wales that had originally been set up to help out of work miners during the Depression, but was subsequently commandeered by the government for evacuees.

She was a member of CND from the outset, was an active campaigner for peace and justice for decades and in the 1980s took part in the anti-nuclear 'Snowball Campaign' at Capenhurst, where she and many others were arrested and charged with criminal damage (some were sent to prison) for symbolically cutting single strands of wire during repeated protests at this and other nuclear sites around the country.

It's hard for me to imagine the impact of growing up missing nearly a whole male generation, but that was Lib's experience. She has been staunchly anti-war all her life and is still active at 95. She keeps up with the news, and is expert at linking what's happening today with past events, pointing out parallels and lessons still not learnt. Despite her limited mobility and unhindered by lack of modern technology, Lib's a great networker; she passes information around the old fashioned way, by phone and post. Long may she continue.

Lib gave me permission to share the information above on the condition that I wouldn't bring anyone round to her house to interview her! After 95 years confronting war, she deserves to be left in peace so please respect this, but if you have any questions I'm happy to ask them on your behalf.