The historic May 21, 2014, agreement marks the first time a huge gas or oil deal in a currency other than dollars is agreed upon. "Normally," the US launches a military attack against any country that tries to abandon the dollar (Iraq, Libya, etc.). The trade in dollars is that big a deal. 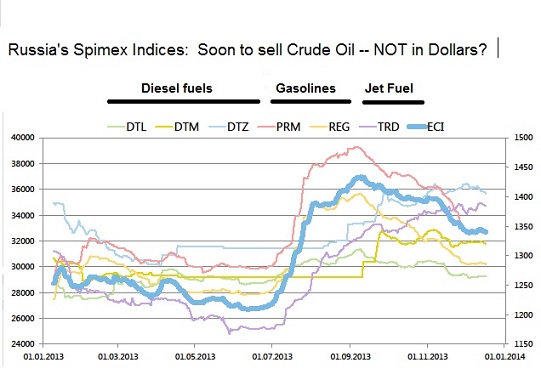 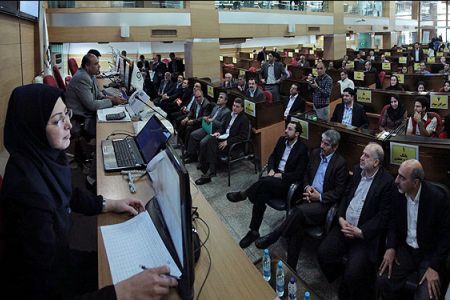 Iran already conducts oil trades for other than dollars. 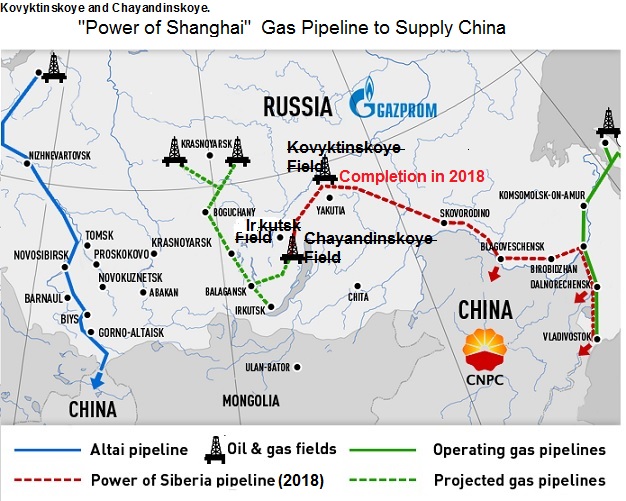 New "Power of Shanghai" Gas Line for Historic May 2014 Agreement

The situation between Russia and the USA almost has reached a state of “cold” war at least. Usually that is what happens when anyone threatens America’s dollar hegemony, which really is its hegemony. Russia and China soon may arrange for payments on their huge natural gas deal (and later a huge petroleum deal) to be made in OTHER THAN DOLLARS – a “RED LINE” for which lesser countries have been invaded and their leaders killed by US forces.

Russia is the second-largest producer of dry natural gas and third-largest liquid fuels producer in the world. Sales of these hydrocarbons by Russia are nearly a trillion dollars a year.

For the first time, the present Russian and Chinese leaders met in China. Both attended the CISA meeting in Shanghai on May 20-21, 1914. Presidents Xi and Putin met to finalize a deal in which Russia’s state-owned Gazprom will supply, via pipeline to China, 38 billion or more cubic meters of natural gas per year – for 30 years — beginning in 2018. China is leading the world into a new Gas Age, a coming epochal change from the Oil Age, for the whole world. China’s gas use will double by 2020.

FOR “CURRENCY OUTLAWS” INTERESTED IN SEEING THE END OF THE “PAX AMERICANA,” here is a site for currency conversion:

The historic May 21, 2014, agreement marks the first time a huge gas or oil deal in a currency other than dollars is agreed upon. Payments from China could be in any of the above currencies. For world trade in other than oil and gas, the volume in yuan already has surpassed that in euros. However, the vast majority of all world trade – not just trade involving the US — has been in dollars since the US emerged physically unscathed and enhanced by war profits from World War II, almost 70 years ago.

"Normally," the US launches a military attack against any country that tries to abandon the dollar (Iraq, Libya, etc.). The trade in dollars is that big a deal, hence so is the Putin-Xi natural gas deal to be announced at the CISA conference in Shanghai (or soon after), where heads-of-state of countries of all religions, civilizations, and levels of industrialization will meet.

The Russia-Chinese alliance won’t stop at gas, of course. Russian state-owned oil company Rosneft’s president – and Putin confidant — Igor Sechin met with the chairman of the Chinese company Sinopec Fu Chenyu on May 15 to discuss possible long-term contracts for the supply of petroleum. These oil contracts , too, could be huge and for other than dollars. Last fall “Rosneft” and Sinopec signed a memorandum of export contracts, which provides crude oil sales to 100 million tons over 10 years on a prepaid basis. That is over 700 million barrels of oil for over $490 billion dollars. If China pays in yuan, rubles or euros instead of dollars, that would mean a huge loss of petrodollar profits for the US. The oil and gas deals together are worth almost a trillion dollars.

The US currently is getting a cut of the vast majority of all world trade as a result of the dollar supremacy, which also gives the its US economic and military supremacy.
The "dollar reserve," or dollar as the world’s standard currency for trading and saving, causes dollars to return to the US as investments and loans, allowing Boehner and Obama to expand the government’s debt limit and Americans to get foreign goods cheaply.


How to Kick America Where It Hurts
“EVEN WORSE”: RUSSIA’S SPIMEX EXCHANGE TO START TRADING CRUDE OIL, and IRAN’S OIL BOURSE GROWS.

Even worse, for American hegemony, is when the dominance of the exchanges for trading in the two main grades of crude oil – the US West Texas Intermediate “benchmark” and the world Brent (based on UK North Sea fields) benchmark – is lost.

Last week, WTI for “next month” (June) delivery was at $99.50 a barrel on the New York Mercantile Exchange after touching $100.42 earlier. Brent for June settlement was at $107.06 a barrel on the London-based ICE Futures Europe exchange. The nationwide-average US price for gasoline usually is approximately the Brent price divided by 42, then adding a dollar a gallon (figures to be $3.55 per gallon last week).

Russia, China, Iran, and many other countries are developing other crude oil benchmarks than WTI and Brent, and other exchanges than NYMEX and ICE on which to trade them – all to “eliminate the middleman” in transactions between themselves.

St. Petersburg, Russia, Oil Products Indices Soon to join these indices is one for crude oil, as Russia establishes competition for US-WTI and world-Brent oil-price benchmarks and the US dollar for world trade

RUSSIA’S St. Petersburg International Mercantile Exchange, SPIMEX is the largest commodity exchange in Russia, organizing trading of real goods and futures contracts. (Futures are contracts for delivery of goods in the future rather than next month or “on the spot,” right now. If delivery would result in a financial loss for one party, that can settle up by paying the loss to the other.)

Based on transactions in the course of trading, the St. Petersburg International Exchange calculates and publishes daily “indices“ of refinery products as shown in the ACCCOMPANYING CHART. The index, like Dow-Jones for stocks, is nondimensional, not in dollars or any currency, but a “pure” number calculated thus:

The "Big Deal at CISA Shanghai" resulting from Xi-Putin meetings Tuesday and Wednesday, May 20th or 21st, will hit all Americans in the pocketbook, removing what is called America’s "exorbitant privilege," which has allowed the Twin Deficits — federal and trade — to grow continually since the 1970s. Of course, nothing grows forever.

As the world’s countries get off the dollar standard — which a big deal like this will put in motion — everything changes in America. The result probably will be not just a mere collapse, but the death of a world political-economic system , the “world-system” itself (a la Immanuel Wallerstein). We can build a better system, but not one with unlimited growth.

IRAN’S REAL NUKE: THE IRANIAN INTERNATIONAL MERCANTILE EXCHANGE The Iranian oil bourse on Kish Island (SEE PHOTO) has almost gotten Iran subjected to the Shock and Awe of the US armed forces. The problem is not Iran’s nuclear-power program; its is Iran’s oil-for-other-than-dollars program. Iran, OPEC’s second-largest oil producer, has the world’s second largest natural gas reserves after Russia.

The Iran International Mercantile Exchange on Kish Island Iran has established its own exchange for crude oil and oil products (rivaling the US NYMEX and UK ICE), its own crude-oil price benchmark (for Caspian Sea oil), its own indices for oils, and oil trade in other-than-dollars.

The oil bourse was started up in early 2008. The bourse requires payment in Euros rather then US$, the current and only mode of payment for oil. Like the St. Petersburg bourse, the Iran Merc initially traded in refinery products, but in 2011 it began trading in crude oil directly, which might one day perhaps create a "Caspian Crude" benchmark price analogous to Brent or WTI crude. This was started only after the Iran bourse demonstrated a reasonable period of trouble-free running and fair prices (Russia’s SPIMEX is at that point now).

Russia is expanding its Asia oil-delivery infrastructure through the ESPO pipeline. Historically Russia focused on supplying Europe with fuel, but that has changed in recent years, especially since the coup in Kiev, Ukraine.

The question is how? Refer to the MAP. “Currently Rosneft supplies China with 300,000 b/d via the Eastern Siberian Oil Pipeline’s (ESPO) spur from Skovorodino, Russia to Daqing, China, which is running at its design capacity,” notes the IEA. The capacity of ESPO pipeline is due to be inceased slowly, adding 100,000 b/d by the end of 2017, with another 300,000 b/d to be added up to 2037. That doesn’t seem like quite enough, especially with the huge Xi-Putin oil summit of May 20-21 in Shanghai.

Pipelines for Delivering Natural Gas From Siberian Oilfields to China’s Populous Northeast The Altai pipeline was started but not completed. The Power of Shanghai line runs parallel to an existing Eastern China - Pacific Ocean (ESPO) line and is desired by China for the huge gas deal with Russia. Russia hopes to make the ESPO oil a standard oil for pricing, along with Brent and West Texas Intermediate. The pricing will be in other than dollars eventually.

In the gas deal negotiations with Russia, China is calling for a new pipeline, the Power of Siberia pipeline to be in parallel with the Eastern Siberia – Pacific Ocean line in the map. There may be an issue on who will pay for the line, and whether an upfront payment from China will be needed.

The pipeline moves will send more ESPO crude to China’s populous east coast and northern region and other Asian nations. Declines in the North Sea output (of Brent-standard oil) may also contribute to increased use of this new benchmark, ESPO, for pricing crude.

And finally we come to another declining oil source and the fracking oil (procured by fracturing rocks by use of high-pressure water ) of the Bakken, Eagle Ford, Marcellus, and Utica oilfields. Newly fracked well may produce 1,000 barrels a day, but this falls by 60 percent the next year, 35 by the third. Oil companies should replace about 40 percent of the current production each year to maintain/increase production.

No oil company has yet made any money at this – if you ignore the enormous amount of money the companies still have to pay back with interest to the banks. That is why major oil companies like Shell already have bailed out, sold off their fracking lands.

The money for the “The Fracking Recovery” was made available by the US Federal Reserve by creating money out of thin air to buy US bonds and bank assets. Banks hoarded much of this windfall but lent out enough to create the Fracking Recovery – without which there would be no recovery at all. As the interest payments of fracking producers of oil mount, and as their wells and oilfields become depleted and the Fed continues “tapering” its stimulus, the Fracking Recovery will end with this decade.

The end of the petrodollar and dollar reserve will insure that it will not return.