Asia-Pacific Left activists say 'No to another coup in Thailand!'

May 23, 2014 - We, the undersigned organisations, strongly condemn the latest coup d’état staged by Thai military under the leadership of Prayuth Chan-ocha. 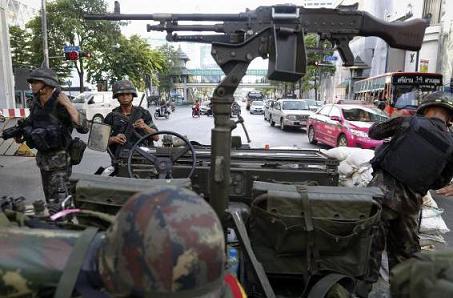 The current coup, which took place almost eight years after 2006 coup, will do nothing to enhance democracy and social justice in Thailand, instead it will only tighten the grip of dictatorial rule and attempt to crush any democratic institution that exist. The army has already started its crackdown on media and the internet, and has arrested people who oppose the coup.

The coup is set to protect the interests of the section of Thai ruling class who want to reduce the democratic space in order to consolidate its power. The military junta in Thailand has no interest in bringing about free and fair elections to solve the political crisis, and certainly will not protect freedom of expression, which it sees as a threat to its rule.

The Thai military has been notorious for ruthless crackdowns on democratic movements, for instance, the bloody massacre of Red Shirt pro-democracy protests in 2010.

- Restoration of the election process to let the people of Thailand choose their future government democratically.

- Stop the crackdown and arrest of political dissidents in Thailand and free all the political prisoners.

- The governments of ASEAN to get together to condemn and assert pressure to end the coup in Thailand.

- All governments to withdraw their ambassadors from Thailand as a demonstration that they do not recognise the military junta.