Musician and Activist is arrest and held without charge after playing and singing music in Beverley town center. 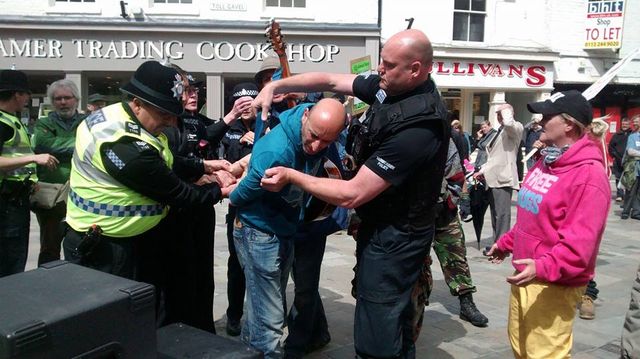 Following on from the arrests of two local residents last week, a further arrest has been made of an activist playing music in Beverley (near Hull.) A flotilla of Police, from the Humberside division, armed with tazers and dogs, swooped into Beverley, town centre, as the busker and anti fracking activist known as Daznez was playing and singing music in Beverley town centre. Local people who were watching and listening to the musician remarked at the heavy handedness of the arrest as at least six police personnel and their dogs took the musician into custody. The musician has been taken to Clough Road, Police Station in Hull but has not yet been charged with an offence.
Last week two residents of the Beverley area, were arrested whilst meditating, at an earmarked Frack site, at the Rathlin Energy, Crawberry Hill, drilling site. Husband and Wife, John and Valerie Majer, were charged with causing intimidation and annoyance contrary to section 241 of the Trade Union and Labour Relations Act.
Rathlin Energy has said it has no plans to frack in the area, although two permits have been granted to them for work to be carried out.
There have previously been charges of corruption, abuse of power and privledge, placed upon Rathlin Energy by activists. This follows after, ex Northern Ireland Environment Minister Dermot Nesbitt, who is now a director of Rathlin Energy succeeded in obtaining the permits from the very same government agency, who were once accountable to him, to drill and extract waste, including the extraction of radioactive waste, at the Crawberry Hill site and another, nearby site at West Newton near Aldborough. (Updates to follow.)