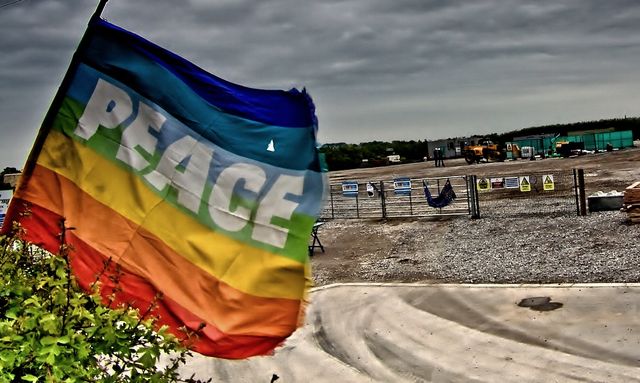 Rathlin Energy caught activists napping today when lorries arrived at Crawberry Hill site in East Yorkshire. The police had allowed Rathlin to ignore (no right turn) traffic signs to gain access without the knowledge of the activists waiting further down the road.
Activists aired their concerns about radio active hazard signs attached to lorries arriving to remove waste water at the West Newton site near Aldborough. The surface water had overflowed the man made ditches made specifically for the purpose due to heavy overnight rain. It seems this presents no present threat but fears are that when drilling begins again and the radioactive elements are brought to the surface any further overflow would contaminate the surrounding area. Residents of the USA and Canada have previously reported ‘dead zones’ of once thriving ecological areas. contaminated by fracking and radioactive chemicals, after overflowing into ponds and lakes.
Activists were also worried about ‘drill tips’ and accessories used in the drilling processes. These are according to the activists, tipped with depleted Uranium, to cut through the toughest rock. Although it cannot be confirmed that these practises are taking place in the East Riding area, the technique and equipment, have been available for quite some time.
The Environment Agency has already given permits to Rathlin to extract waste, including radioactive waste. Unconfirmed reports suggest Dermot Nesbit (Rathlin Energy director) had used his influence as an Ex Northern Ireland, Environment Minister to secure the permits, from the Environment Agency, the same department (within Northern Ireland) of which he was once chief.
Hull and East Yorkshire anti frack.