A Central Intelligence Agency report written by top European Analyst Steven Woehrel for the U.S. Congress Foreign Affairs committee has cast doubt about the future of the Ukraine current government and exposed the US role in the removal of the elected government. 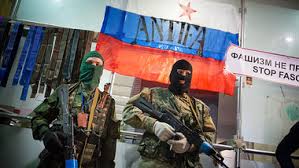 The major floor in the floor is that it fails to understand the significance for internal Russian politics of the east Ukrainian, or Vostok, independence movement in Donetsk and the role being played by the Communist Party’s of Ukraine and Russia as well as the formerly outlawed Rodina Party with former military and KGB associations.

The report by Woehrel, Ukraine: Current Issues and U.S. Policy published in the 20th May 2014, paints a depressing picture for the future of Ukraine under the current regime which are described in the report as a mix of corrupt oligarchs from the Southern and Eastern regions and extremist and violent Nationalists from the Central and Western areas. Woehrel stated that the Maiden demonstrations liken like continuing because of the ‘rampant corruption and other shortcomings in the rule of law’ of the current regime made up of three extremist Nationalist Party’s the Freedom Party, the Fatherland Party and the Right Sector.

The report also claimed ‘that Russian intelligence officers in the Ukraine are coordinating the unrest’ with the goal of stirring up trouble to discredit and then other through the current government in Kyiv. Part of plot uncovered by the CIA and contained in this report is the claim that there is a majority of current military officers within the Ukraine Army working with the Russians to destabilise the government ahead of a military coup. These reports from undisclosed sources explain the current junta favouring the Right Sector National Guards over the military in the eastern region.

Woehrel also noted in his report the financial outlook for the Ukraine with what it calls ‘long-standing problems in attracting foreign investment’ due to official corruption and systematic long-term issue with the rule of law. The report also noted that there are issues also associated with dwindling foreign exchange reserves with a distinct prospect of a default on sovereign debt. These issues which have became apparent during the term of the new President Petro Poroshenko.

The cure to this economic illness according to the report noted is the implemtaton of a plan drawn up by the United States, the European Union and the International Monetary Fund during the time when Tymoshenko was Prime Minister to take control of the Ukrainian economy. The major part of these reforms included the export of Ukraine gas and coal resources into Europe and the building by German banks of a gas pipeline from the west into the Ukraine to replace nuclear energy production. The reported noted that with Ukrainian politics being a struggle between oligarchs fighting for control of the economy that former President Yanukovych and his now defunct political party the Party of Regions were the political tool of steel and coal mining magnates of the Donbas.

An interesting feature if the report was the admission of US sponsorship of the Maiden disturbances to the tune of over $4bn after the Yanukovych Government ‘made a last-minute decision to not sign an Association Agreement with the European Union, due to Russian pressure’.

The direct election of an oligarch as President and the incorporation of Nationalist mercenaries have previous fought as mercenaries with al-Qaeda in places like Chechnya, Iraq and Afghanistan into the National Guard have not helped calm the disquiet around Kiev. According to the report the Maiden protesters continue to be involved with violent clashes with authorities in Kyiv dispite the change of government.

The report stated that the disturbances in the eastern regions were caused by Russian provocations with protesters favouring either union with Russia or independence. There was also mention of a ‘Soviet mind frame’ in the east meaning that the Communist Party has strong support and control over the trade unions in the steel and coal industries. Industries which are needed to pay for the debts of the nation fuel used to fuel the corruption of the oligarchs.

No mention however was made of the Russian support extended by the Communist Party of the Russian Federation and from their formerly banned in the Neo-Stalinist Russia the Rodina Party. It is interesting to note that the leading figures of the Republic of Donetsk and Lughansk are all former leading members of the Rodina Party in Russia during its period of illegality under Putin. Many of the leaders of the Rodina Party are either former Soviet military commanders of KGB officers who still have extensive connections with the military and secret services especially during the war in Afghanistan.

The influence of Russian opposition parties in Eastern Ukraine is one of the most interesting factors not covered by this report or by the media in general. The appearance of the Battalion Vostok which is based on former fighters who fought against the United States support Taliban in Afghanistan and was later reformed for the War Chechnya is another interesting development. The Battalion Vostok is considered to be one of Russia’s most experienced battalions and has experience in fighting both counterinsurgency and guerrilla campaigns.

If the rumours are true that the Battalion Vostok and the leaders of the People Republic of Donetsk being funded and sent by Russian military it would have greater consequence for Russia’s internal politics than it would have for Ukraine’s. The strong connections between the Battalion Vostok with the former officers now members of the Rodina Party such as current Donetsk Prime Minister Alexander Borodai and their access to high grade military equipment shows that Putin and the Kremlin are losing the support of the Russian military with the limp wristed response the violence in the east. This is especially the case since the Neo-Stalinist Rodina Party has been banned and had several of its leading members jailed on trumped up charges. The report notes that over fourteen cities throughout the eastern region are now in the control of armed separatists with many others supporting the cause in Southern Ukraine.

Woehrel report noted that President Oleksandr Turchynov, Prime Minister Yatsenyuk, and other Ukrainian had claimed that the repeated ‘failure of Ukrainian police and security forces to maintain or restore order in eastern and southern Ukraine’ was caused by ‘low morale, corruption, and a lack of professionalism; alleged covert political games played by oligarchs once affiliated with the previous regime; and sympathy for the separatists.’ He continues by stating that Ukrainian and Western experts believe Ukrainian intelligence and security forces are thoroughly penetrated by Russian agents’ with ‘Ukrainian leaders may increasingly use armed volunteers supplement the regular security forces.’ In other words the oligarchs currently in charge of the Ukraine are planning on purging the military of its current leadership because they believe they are or will be in the future working with other oligarchs, eastern separatists, Communist, Russian nationalists and other oligarchies to plot a coup against the current pro-European fascist regime.

The prevent such a coup from arising the report recommend that the current regime under US advice has tried to hand over control of separatist areas to the Eastern Oligarchs ‘to enlist the support of some oligarchs to try to quiet the situation in the Donbas, Kharkiv, Dnipropetrovsk, and other areas where they own large businesses, with mixed success.’

The report noted that in ‘mid-May Rinat Akhmetov, Ukraine’s most powerful and richest oligarch, organized steelworkers and other employees of firms he owns to try to restore order in the city of Mariupol’ which was connected to an attack on the city on Victory Day led by the National Guard and the Right Sector which famously led to confrontations between them and unarmed citizens.

The report claims that ‘If Akhmetov is successful in Mariupol and elsewhere in the Donbas; he may be in a good position to bargain with Kyiv for effective control of the region in the guise of “decentralization” within a united Ukraine, which he says he supports.’ This policy which offers to use Right Sector thugs and foreign mercenaries to usurp the authority of the state and by pass the military would effectively turn the eastern oligarchs into Afghan style warlords with privately run armies.

The base problem for the Ukraine is the same base problem that is also affecting Russia and every other post Soviet state. People across the former Soviet Union from Kiev in the west to Tblisi in the Caucus, Moscow on the Volga Ma and to Tashkent in central Asia are rejecting the rule of post-Soviet oligarchs who have come to power through profiting by stealing the assets of the people. The people are rising up and rejecting the rule of the oligarchies who through control of the military and secret services stole the assets that the people of the Soviet Union build up over 70 years of Communist rule.

The rejection of the rule of the oligarchs who are now at war with and the consequences can be seen in the Ukraine which has Europe’s lowest standard of living but has Europe’s richest oligarchs. Current Ukrainian Prime Minister Yatsenyuk has told U.S. authorities that his government is a “kamikaze” government knowing ‘the political unpopularity of some of the decisions that are required as part of the IMF-mandated reform program’. Presumably the former disgraced Prime Minister Yulia Tymoshenko will be returned to power by the United State and its European allies once the economic reforms are outlined in the report are set in place by the current ‘Kamikaze’ regime.
The description of the key political parties in the Ukraine’s according to the leaked report

Party of Regions
Until February 2014, the party of the ruling regime and by far the largest faction in the Ukrainian parliament. It has drawn its support from eastern Ukraine, where suspicion of Ukrainian nationalism is high and support for close ties with Russia is strong. It defends the economic interests of powerful oligarchic business groups. Since the collapse of the Yanukovych regime in February 2014, scores of deputies have left the party, with most of the rest apparently unwilling or unable to offer serious resistance to the new leadership, at least for now.

Fatherland:
Founded by Yuliya Tymoshenko, Fatherland has run on a populist, anti-corruption platform. It draws its support from western and central Ukraine, where Ukrainian nationalism is strongest. After the collapse of the Yanukovych regime in February 2014, Fatherland effectively became the leading faction in Ukraine’s parliament. Former party leader Arseniy Yatsenyuk is Prime Minister in the new government. Many of the ministers of the new government also come from Fatherland.

Freedom:
A party espousing extreme Ukrainian nationalism and economic populism, Freedom receives its support from western Ukraine, where Ukrainian nationalism is strongest. Its activists played a key role in fighting against riot police in the Maidan protests. The party is led by Oleh Tyahnybok. Freedom members hold several important posts in the new government.

Communist Party
The Communist Party was overtaken by the Party of Regions in its eastern Ukraine strongholds and has a largely elderly electorate. It opposes market economics and favors strong ties to Russia. It is hostile to the new government in Kyiv.