Join the Campaign for the Accountability of American Bases (CAAB) at the main entrance to NSA Menwith Hill, HG1 4QZ, on Friday 4 July from 5pm to 9pm for the annual "Independence FROM America" demonstration. 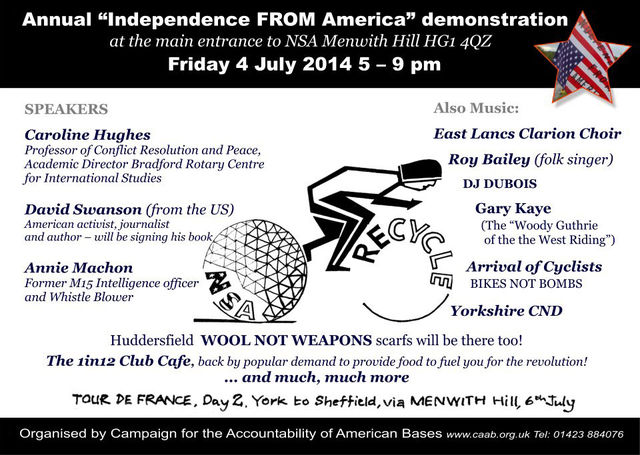 There has been a demonstration at this US base since 1980 and since 1990 it has been organised by CAAB.

Although referred to as "RAF" Menwith Hill it is NOT. It is occupied and controlled by the National Security Agency with the National Reconnaissance Office) - they spy and gather intelligence on everyone (thank you Edward Snowden!) AND important connection with the US Missile Defense (read OFFENSE) system, intelligence led warfare (Drones) and much more. NSA/NRO Menwith Hill is a very important and significant base for the US military.

Please come if you can and also may we ask you to send these details far and wide. We need to give the unaccountable, secretive and out of control of the UK government ATTENTION!

David Swanson (from the US), American activist, journalist and author - will be signing his book.


INVITATION TO JOIN THE 'THUNDERCLAP'

If you can't go yourself and you're a user of social media, you're invited to share the 'Thunderclap':