Wearing the bright yellow t shirts with no ilf no life we made our way to HQ....they placed crash barriers in front of the visitors doors and placed G4s security guards behind the crash barriers. I spoke to one of them and said that we had a right to protest against the Government who were hurting disabled people so cruelly with one horrendous policy after another. He said yes you have. But you are not coming in 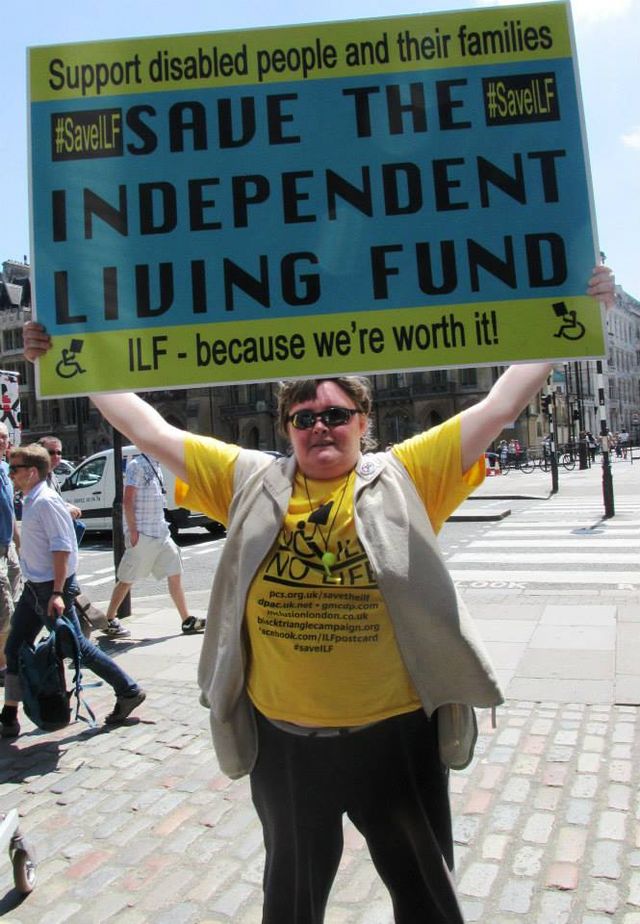 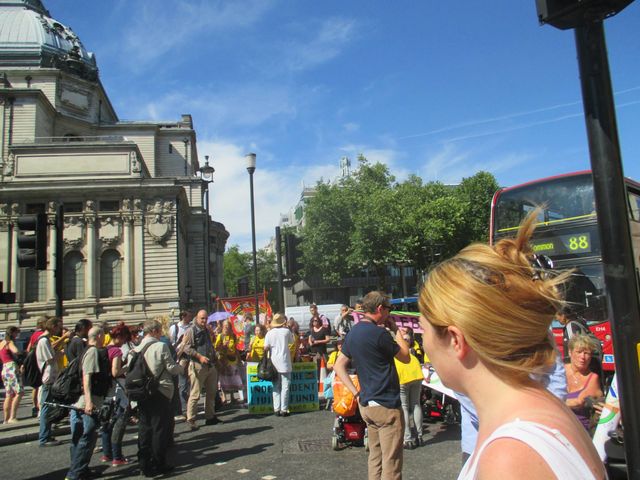 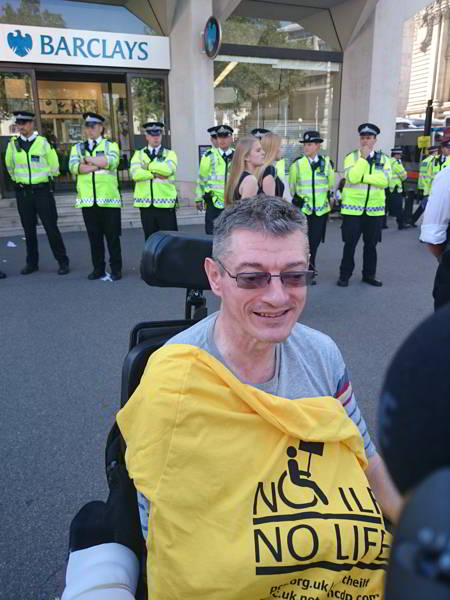 I picked up the giant ILF postcard tried to hold it above my head stood in front of those guards and said that the 4th July was our battle for independence. That what we wanted to do was live independently in the community living our lives as best as we can. This government are closing the ILF and 18,000 disabled people with high support needs face a bleak future of very little support at home, imprisoned at home unable to take part in society excluded from society in so many ways, working, visiting friends and family to name a few. Or having to horrendous prospect of going into residential care far from friends and family. It's a horrible thought isnt it?

You know the ilf receipents and activists are an amazing group of people. They want to continue to do what they do now. Just live their lives. They will fight for that right, and they are.

28th June 2014 the ilf recipients tried their best to carry out the occupation of the grounds of Westminster abbey supported by DPAC and occupy London and UK Uncut to highlight the issues around the ILF. It was a peaceful protest, the dean of Westminster abbey was presented with a letter to explain why we were there. He refused to come out and speak to them. He refused to speak to John Mcdonnell Mp who watched the entire protest and spent a good few hours trying to track him down.

The Ilf receipents thought of that idea for the camp. We supported them and proud we were to do so. We stand shoulder to shoulder with them every step of the way with their continuing fight to live their lives doing what non disabled people take for granted and live.

They were surrounded by 200 police officers and more were outside. They sat in their wheelchairs , proud determined and together. It bought a lump to my throat. We can all learn a lot from them.

They have faced criticism for the action they took a week ago. Militant peaceful action. Raising the issues and fighting for thier rights. When you have a government such as the coalition government is, they are not prepared to listen to us, meet with us, and we have asked many times to do so.

In fact I remember when we were facing ids at the dwp parliamentary select committee on 9th December 2013 in parliament with him surrounded by armed police officers as he is terrified of us. A face to face meeting was happening with Mr Mike penning, minister for disabled people over the issues that were affecting us as disabled people and how the policies of the government impacted upon us.

An ilf receipent and her Personal Assistant [P.A.]. and others there had the same response as us. Armed police officers and a arrogant dismissive attitude from the Minister himself.

These actions may be the last chance the ilf reciipents may be able to take part in anything and raise their voices in anger because from June 2015 life without the Ilf funding and their PA by their sides is going to be very different indeed.

Yesterday we faced more police officers in vans who guarded the dwp hq building like it was fort knox. They were around the entire building. We responded by blowing our whistles, making lots of noise and singing.

We then trooped down the road to Victoria Street near Westminster abbey and lead by the police we went into the road and we stayed there for an hour in the hot sun and held up an number 88 bus, bringing Parliament Square to a gridlock.

I was proud humbled and really emotional as I watched the ilf receipents sit there with their banners while tourists and other passer by took photos. We were peaceful and hereos all.

After an hour we all decided that we needed cool drinks as we were tired. The police stayed outside the pub we were in terrified that we would go back to the dwp. We handed out ilf postcard s to them. Some of them took them.

Yesterday 4th July was also our independence day. Disabled people fought back yet again for their fight for their rights. I know only this. Where ever they are I am standing shoulder to shoulder with my brothers and sisters. Government are scared of us. So they should be because we are fighting back.