Friends of the Earth Cymru called a national day of action against fracking and other extreme energy extraction methods for Saturday 5th July. Here in Wrexham, where the local council threw out an application for test drilling at Commonwood, Borras back in March, the company (GP Energy/Dart Energy/IGas) has now appealed against the decision (grounds for appeal attached as pdf) and the file is with the Planning Inspectorate in Cardiff, where they are apparently trying to decide whether an Environmental Impact Assessment is required (should be - it's essential!) before setting the timetable for the appeal.

To mark the day, members of Frack Free Wrexham and FoE members from Wrexham, Chester and Llangollen held a stall in the centre of town from 10am-2pm, also joined from midday by Wrexham Greens. 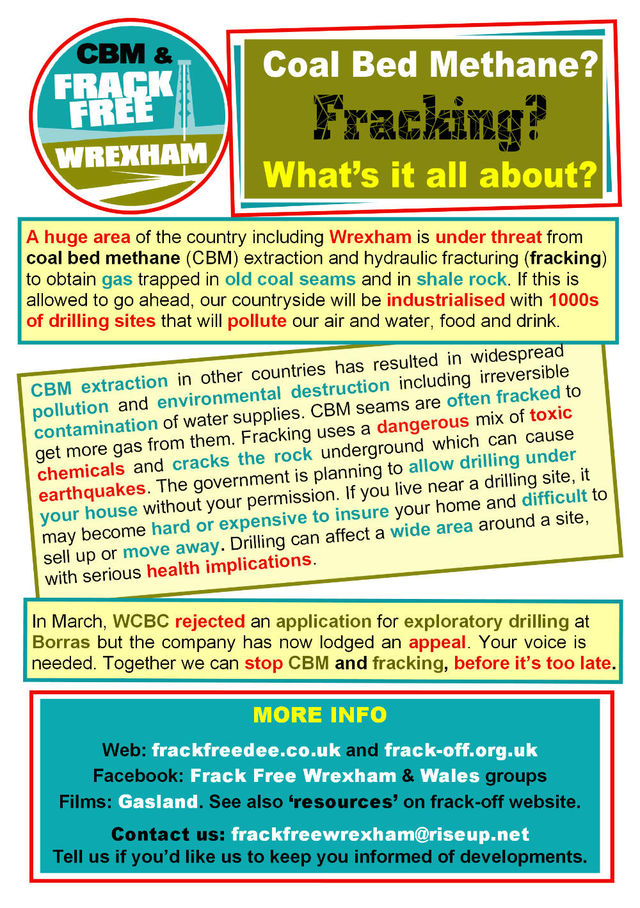 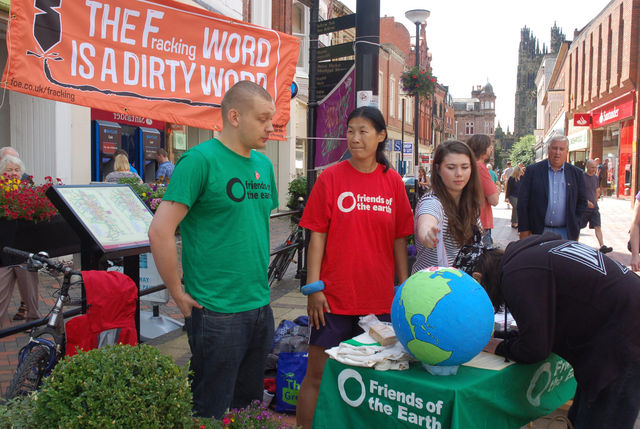 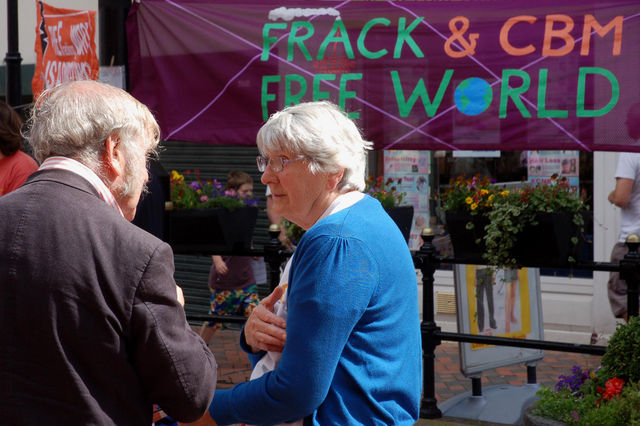 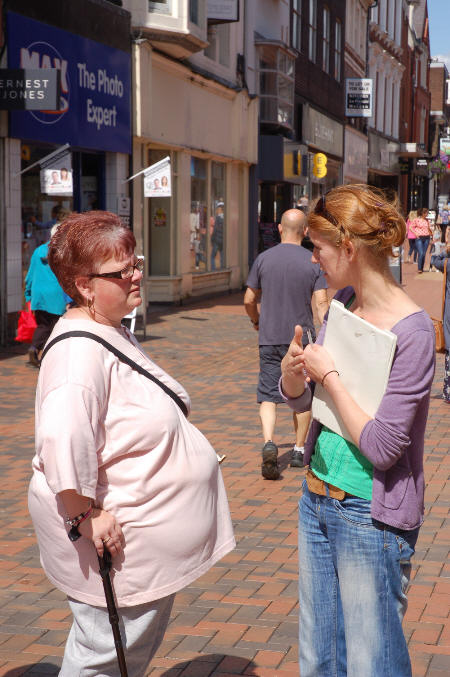 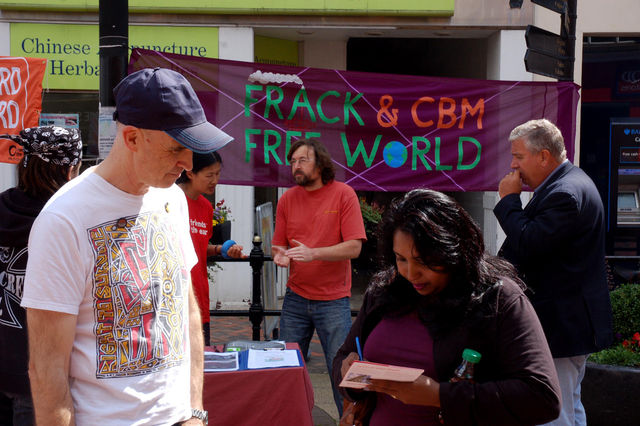 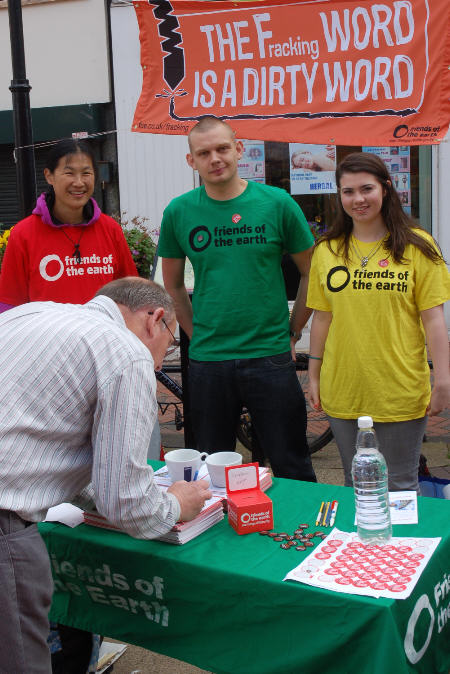 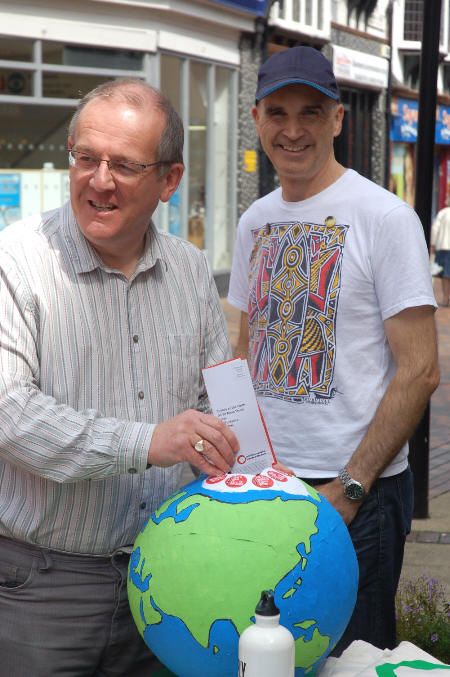 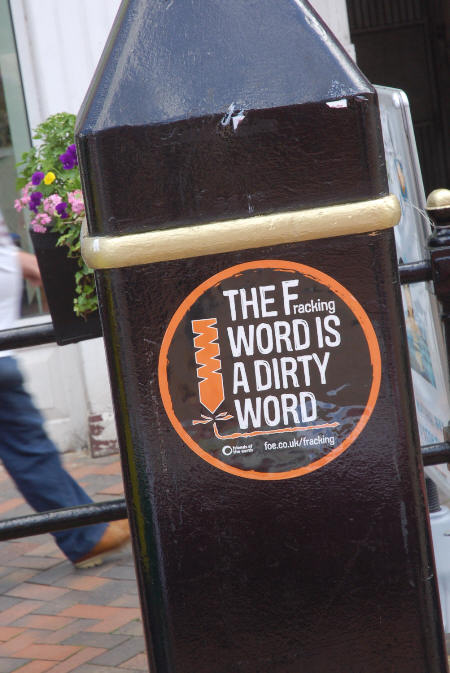 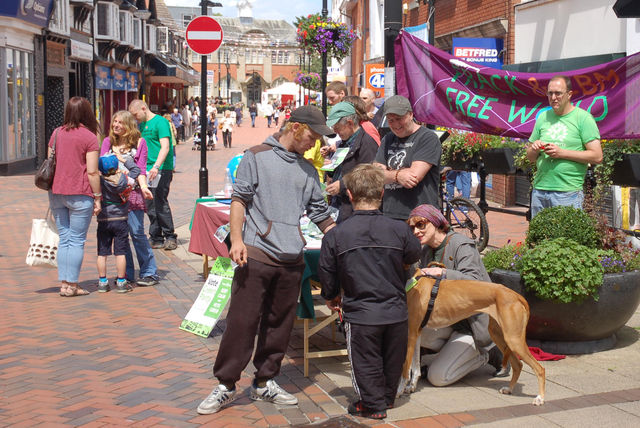 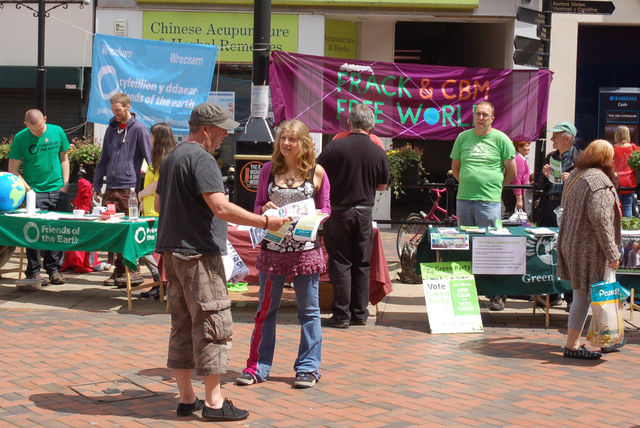 Raising awareness of the issues

Friends of the Earth had information cards with a tear-off portion to send to First Minister of Wales Carwyn Jones, AM. The text on the cards included

Quite simply fracking is a gamble we don't need to take.

Huges swathes of the UK will be up for fracking under new licences - drills could be coming to a field near you. But communities right across Wales - from Wrexham to the Vale of Glamorgan - are fighting back.

Completed cards were posted into a globe postbox and will be sent off to Carwyn Jones en masse.

Frack Free Wrexham handed out hundreds of our basic info flyers, collected signatures on a petition and signed people up to be kept informed of developments. We're part of the Frack Free Dee Coalition which includes groups across the area resisting fracking, with a current camp at Upton-by-Chester, the organic farmland occupied to protect it from drilling [Report: indymedia | photos on flickr | facebook group] and a previous camp at Farndon [Reports: 1 | 2 | photos on flickr].

Do you want learn more about Fracking and see the impact it has? If so, then you are invited to a free screening of Gasland [YouTube trailer for film].

When US filmmaker Josh Fox is asked to lease his land for drilling, he embarks on a cross country odyssey uncovering a trail of secrets, lies and contamination.

We're going to need a concerted effort to stop IGas in its tracks. Groups across the region and beyond are doing the research that will be needed to show that ALL these planning applications should be rejected and appeals refused. There's plenty for people to do, from awareness stalls like this to leafleting your neighbourhood, sharing information with your friends and family, hosting and attending public meetings... building a strong network to resist the threat of unconventional energy extraction here in Wrexham and everywhere.

To get involved, come to the film screening, look for Frack Free Wrexham on facebook or email us at frackfreewrexham [AT] riseup [DOT] net.