On Wednesday, July 9th, the otherwise successful Day of Action against Nato in Merthyr Tydfil was marred by an intrusive police presence, the attempted intimidation of Stop Nato Cymru activists and the harassment of a public meeting that afternoon. 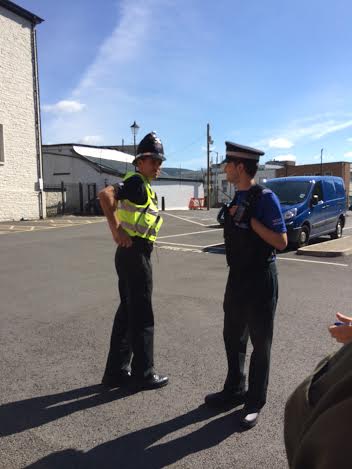 As soon as a stall was set up in the town centre the police made their presence known, with a mixture of "Community Support" officers and actual coppers surrounding the table - groups of two standing at either end of the street and four walking passed repeatedly, taking leaflets and demonstrating their cutting edge intelligence gathering techniques with questions such as "What you up to?", "Are you moving on?" and "Are you doing this anywhere else?".

Later that day a meeting was called in a public community centre to plan local and national opposition to the Nato Summit, with a warm welcome to anyone who wished to attend - apart from cops, who couldn't seem to grasp the fact that it wasn't for them.

Two police (55608, plastic copper, and 4680, fully-grown porker) told staff at the community centre that they'd come to find a meeting - "something about NATO". They hung around in the adjacent cafe, peering in to the meeting room, realised that they'd been noticed and proceeded to take a walking tour of the outside of the building. When confronted by activists they admitted that "We'd heard there was a meeting", refused to disclose where they'd heard and walked off, ignoring requests for further details.

What's clear now is that Stop Nato Cymru and South Wales Anarchists are networks that are well and truly on the state's radar, with the likelihood that our websites, social media and possibly emails are being closely monitored in the run up to the NATO summit.

Making this so blatantly obvious was either an idiotic mistake by Merthyr's police or an attempt to intimidate activists before the summit, in which case they failed spectacularly. That anti-war and social justice campaigners can be targeted in this way, just for their attempts at social change, makes our reasons for targeting the state all the more justified. When 60 "world leaders" besiege Newport for two days in September and the heavy muscle of the state tries to keep their circus going by suppressing dissent, we will be ready and more determined than ever to make our feelings known.

Details of the police (pictured above) Beware, these individuals could be dangerous, intrusive and potentially violent. Stay away if spotted in public.