DPAC Northampton Protest Against Cuts To The Disabled Facilities Grant 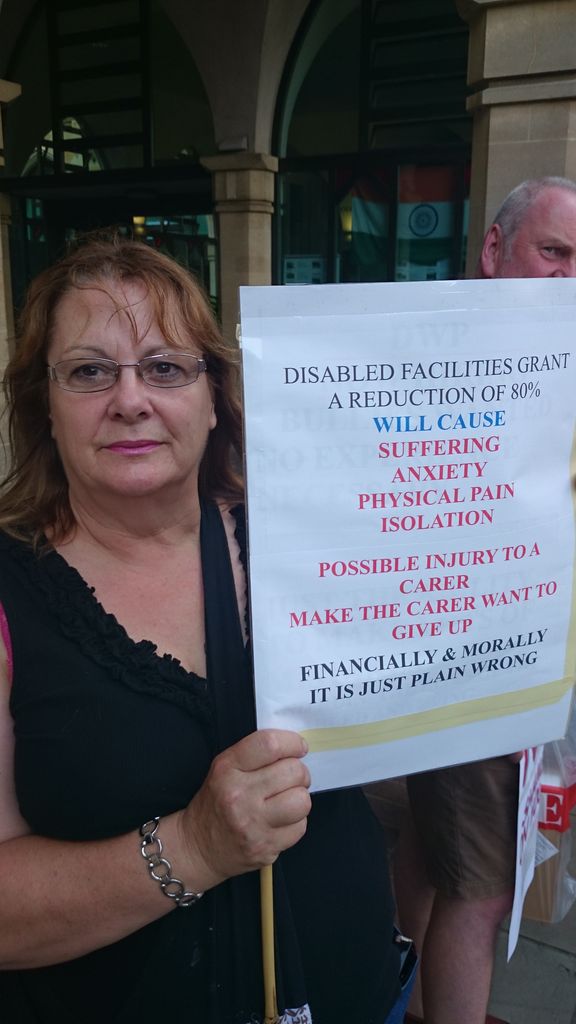 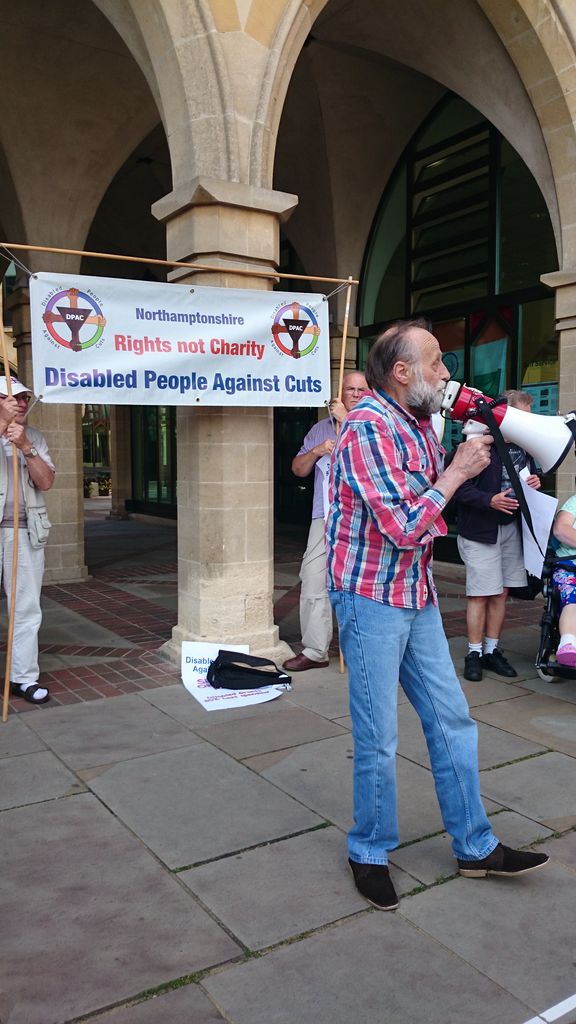 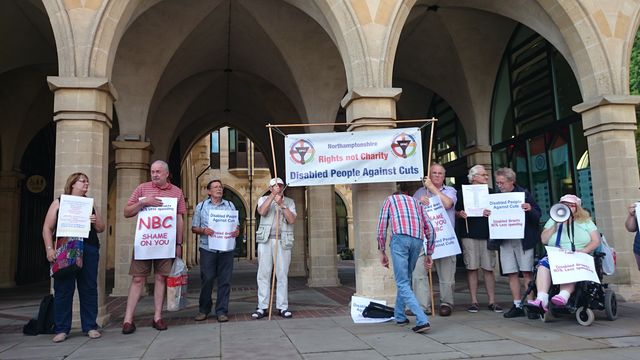 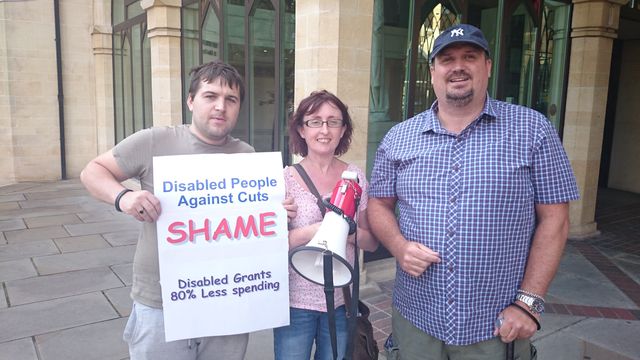 Today Northampton Disabled People Against Cuts (DPAC) protested outside the Guildhall, Northampton. A group of about 14 disabled and non-disabled people gathered to highlight the fact that Northampton Borough Council (NBC) have made a cut of 80% to the Disabled Facilities Grant (DFG). They timed the protest to coincide with a meeting of the Northampton Disabled People’s Forum so that they could hand in a set of questions regarding the cuts.
DFG’s allow disabled people to make much needed alterations to their homes and can include things such as ramps, widened doorways, stairlifts etc and are essential for allowing disabled people to stay in their own homes.
Norman Adams, the organiser of the protest, noticed the reduced spending whilst reviewing the Council’s monthly expenditure. In the first quarter of this year the council spend on DFG’s was £176,629, compared to £989,278 in the same quarter of the previous year. “That’s a difference of 80%,” Mr Adams said. Putting these figures to paper he handed them into the attendees of today’s forum meeting. “We are simply asking that this huge reduction is put on the next meeting’s agenda so that it is discussed and properly considered. Is the drop due to less need for DFG’s, or is it a case of the council raising the bar? Have the entitlement conditions changed? If so, has there been an Equality Impact Assessment of these? At the moment we simply don’t know.”
One of the protesters, Chris Kinsey, feared that NBC were following the example set by neighbouring Cambridgeshire.
“My sister in law had to wait 13 months for a DFG. 13 months! In that time she was unable to use a bath or a shower. Can you imagine what it would be like on a hot day like this not being able to access a basic human right such as having a wash? And then have that going on for 13 months. I’m worried that Northampton is going to go the same way and that they will delay or reduce the amount spent on this vital funding stream”.
Many of the people made impassioned speeches expressing their concerns regarding the cuts, one of whom was Northampton Left Unity’s Bianca Todd, ”Shame on you Northampton Borough Council. Shame on you! In that building they earn good wages and have large expense accounts. We look after animals better than we do people in this country and in this day and age that’s an absolute disgrace. We need to open our eyes. There are elections coming up soon and they (the council) need to realise that votes come at a price.”
Justin Brown, another member of Left Unity, suffered a spinal injury in 2012 and went from being a very active person to someone who now has trouble walking very short distances. He is always in pain and cannot dress himself. He said, “I am really angry that this country can find £1.1bn for spying on their own population and sending drones up in the air and yet they are cutting funds to the disabled that will allow them to maintain their independence.”
It’s clear that the decision to make these cuts is a political choice and not an economical necessity. As Mr Brown points out, the Borough Council is spending £6 million on the de-pedestrianising of Abington Street, which is hugely unpopular. The money is there so there is no excuse for this attack on one of the most vulnerable sections of the community. But this isn’t an isolated event.
During a court case last year the DWP had to admit that the real reason why the Independent Living Fund (a fund that enables disabled people to pay for carers, allowing them to stay in their homes and not end up in an institution) was being transferred from them to local authorities, was that after 2015 the money will no longer be available.
The next meeting of the Disabled People’s Forum is Tuesday, 23rd September at 5.30 pm. Mr Adams hopes that his questions will receive the answers they deserve. If not then this is only the beginning of the fightback.
You can find the full details of this issue on the DPAC East Midlands Facebook: