Report of the demonstration against Israeli Operation Protective Edge which took place in Newcastle on Saturday 26th July. 13 photos attached. 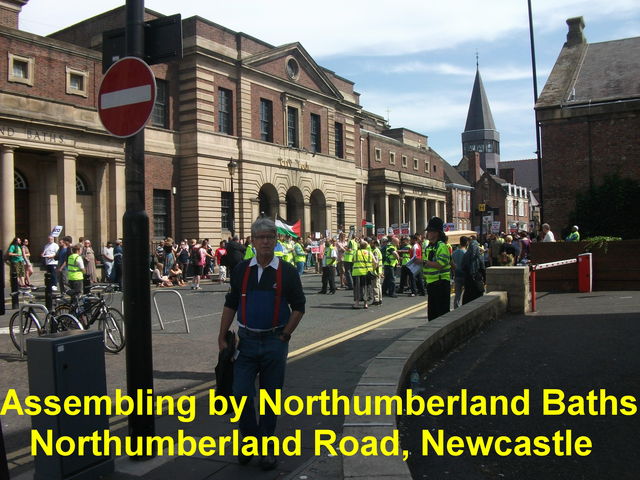 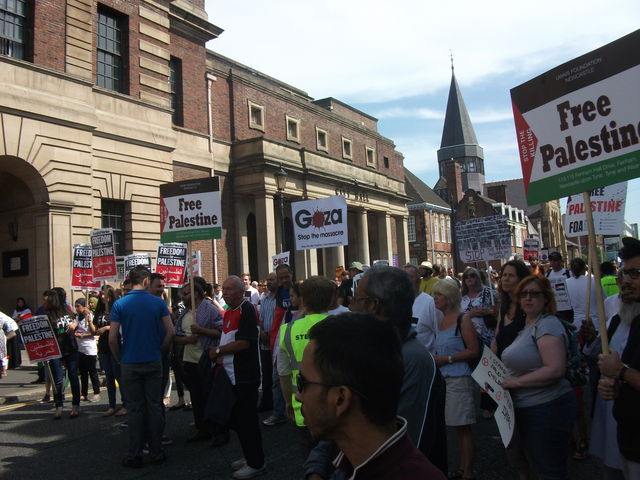 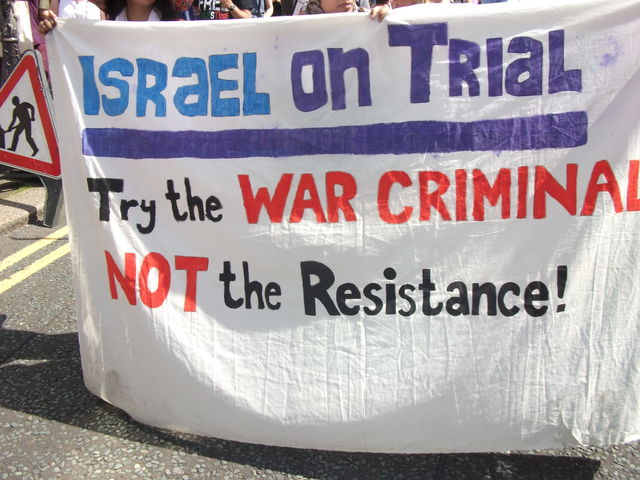 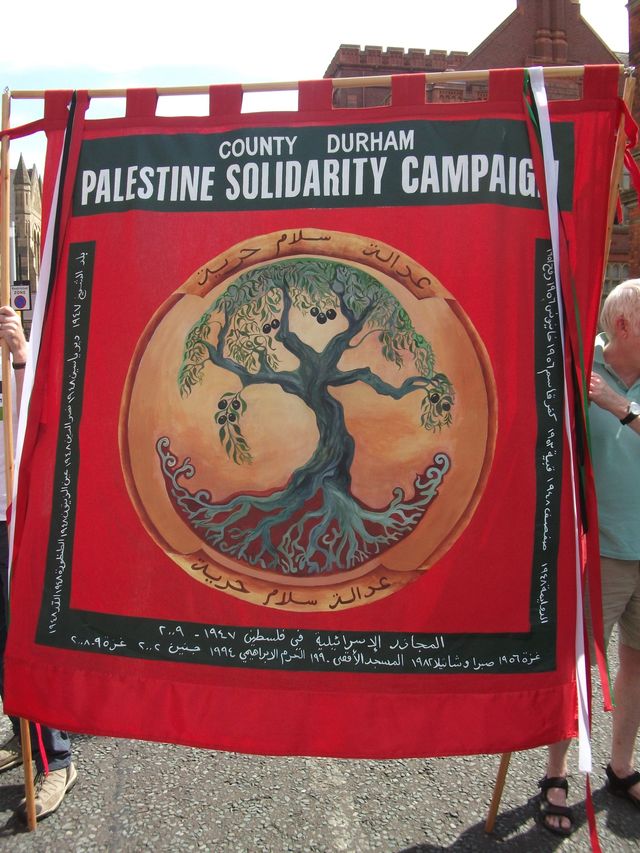 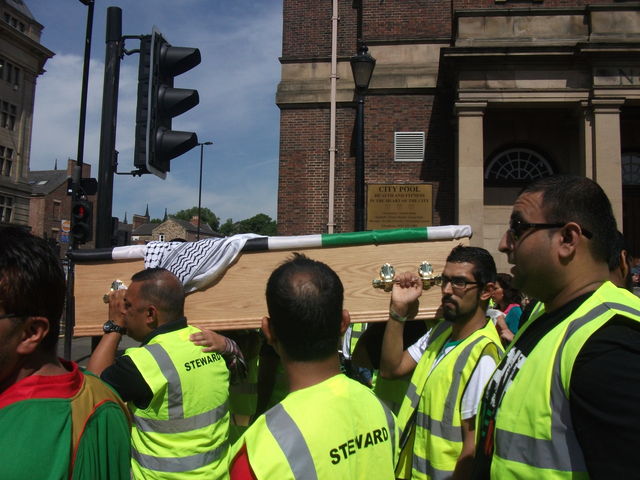 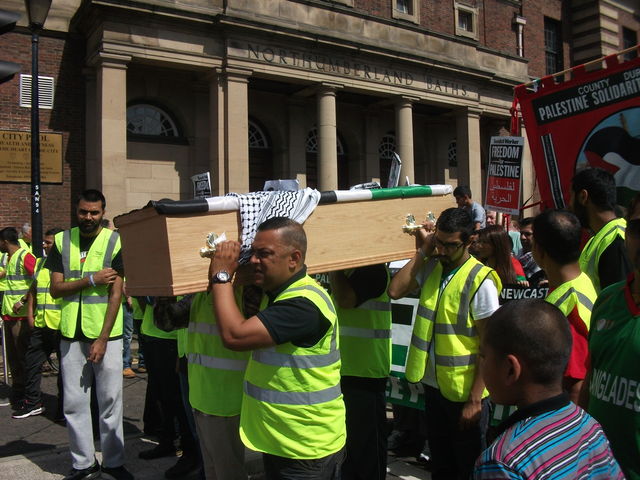 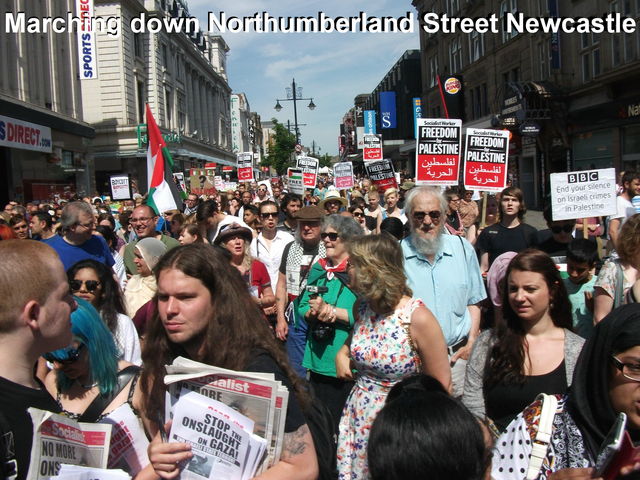 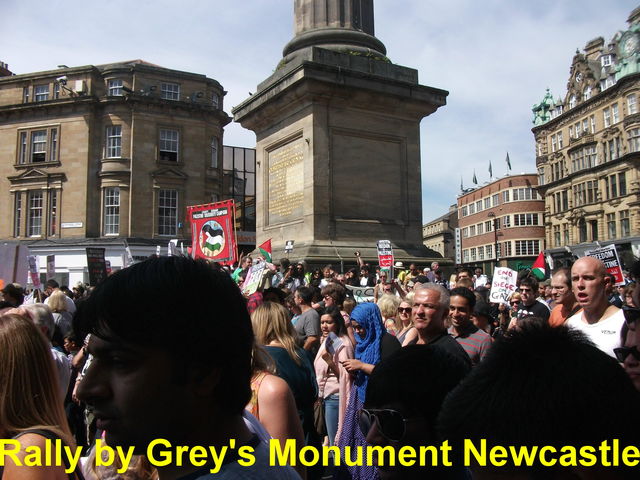 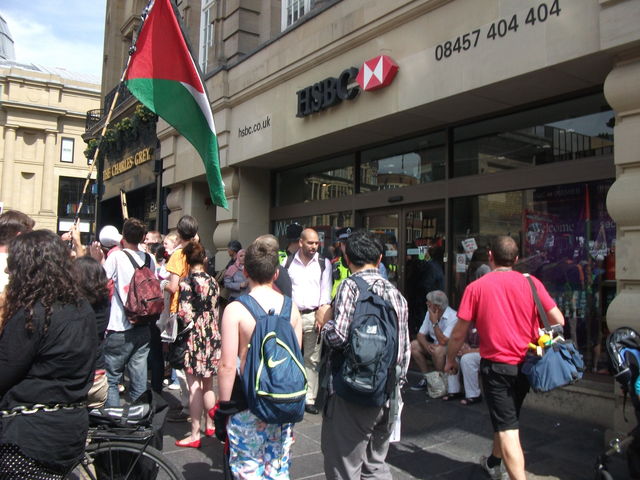 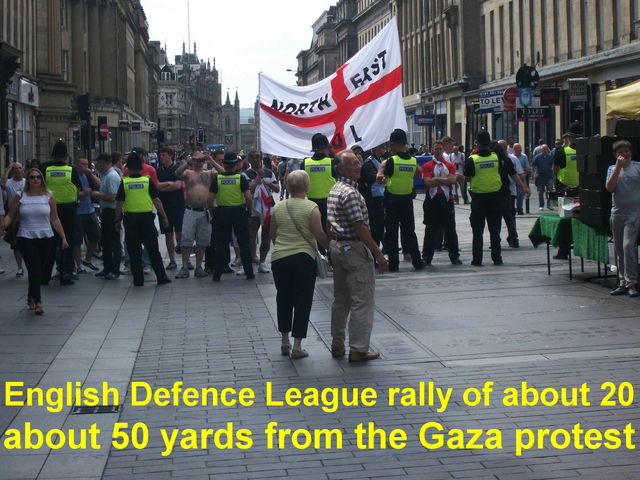 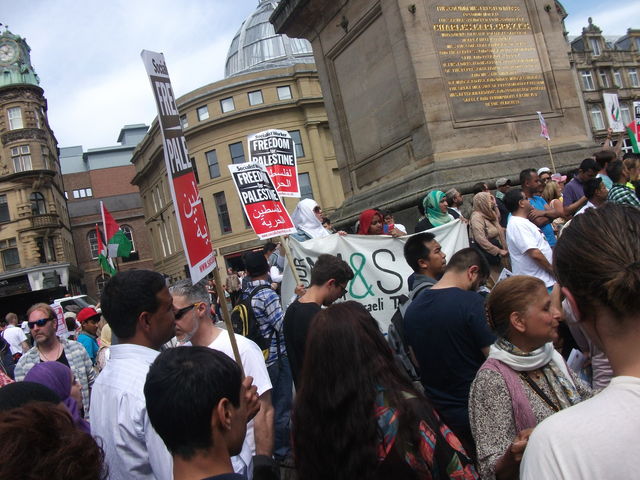 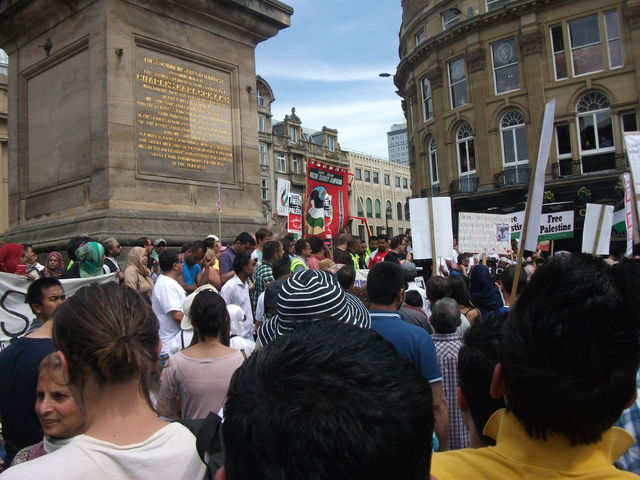 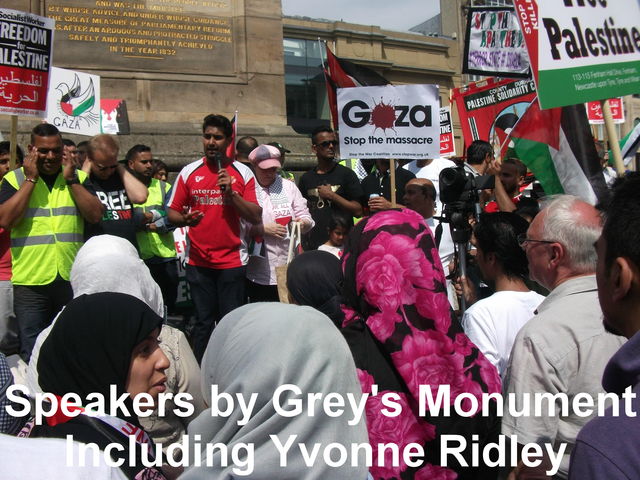 Saturday July 26th 2014 saw demonstrations against the attack on Gaza (Israel’s Operation Protective Edge) all over the world and there was a demonstration in Newcastle upon Tyne in the North East of England which drew around 500 people.

The rally assembled outside the Northumberland Baths in Northumberland Road, Newcastle at about 1130. There was a long and loud chanting of `Free, free Palestine! `, `In our thousands, in our millions, we are all Palestinians`, `From the river to the sea, Palestine will be free! ` and `Brick by brick, wall by wall, Israeli apartheid has to fall! ` . The march went off at about noon and the marchers walked along Northumberland Road, Northumberland Street past the many smart shops and along Blackett Street to Grey’s Monument.

The banners and placards read `Free Palestine`, `Gaza End the Siege`, `Gaza Stop the Massacre` and a number of protesters carried a symbolic coffin draped with a Palestinian flag.

There were a number of speakers including one who had been to Gaza many times as well as a local Labour MP, a Methodist preacher along with the former Sunday Sun columnist Yvonne Ridley. One of the speakers made the point that the current conflict is not so much a political or religious affair – it is a matter of humanity.

Three small planes flew overhead which was part of the local Sunderland air show. Fortunately these planes were strictly for exhibition and were harmless. Think how terrifying it would be in Gaza with missiles continually crashing and exploding in the very crowded area and drones constantly hovering above.

Writer Yvonne Ridley was the final speaker and she spoke passionately about the awful siege of Gaza and lambasted the British Government for its arms sales to Israel. She criticised the BBC coverage of the conflict which was biased in favour of Israel. If glorifying terrorism is a crime then why not arrest the government? As another four small planes crossed the sky above she quipped “We’ve even got a flypast!”

There was a small counter demonstration by the EDL (English Defence League) who numbered about 20 and it was kept back from the Gaza protest by a line of police. Though small they were noisy and one ran at the rally for Palestine with an Israeli flag. Fortunately there were no serious incidents and no arrests.

The event was covered by the local Sunday Sun which had an article and photos on page 25:


The protest was also featured with a small photo on page three of Monday’s Newcastle Evening Chronicle.

The media coverage has been varied with the BBC as usual describing Hamas and the Palestinians but not Israel as `militant`.

The BBC news website announced at noon on Sunday: `Palestinian militant group Hamas declares Gaza ceasefire after Israel ended earlier truce amid rocket fire from Gaza` - note how Hamas and Palestinians are always `militant` while no such pejorative term is applied to Israel. Israel is described as having ended the truce after rocket fire from Gaza, the narrative is familiar – Israel is simply responding to provocations from the Palestinians.

The BBC Scotland website headlined the Edinburgh protest `Anti-Israeli protest on the streets of Edinburgh` which suggests that the demonstration was somehow anti-Semitic.

Sunday’s Andrew Marr Show on BBC1 included an interview with Labour Party leader Ed Milliband. When asked about Gaza he was quick to point out that he was a member of `Friends of Israel` and said that “The International Community needs to engage even more.” I for one have often wondered who precisely this `International Community` are and how they might be contacted.

Al Jazeera’s Nicole Johnston reported that 1,052 Palestinians had been killed as of late Sunday morning. On the same channel Mona Dohle said that in the `battle of the hashtags` meaning the social media Israel was losing.

A trawl of Sunday’s papers was instructive, the front pages of the tabloids were as per usual focussed on celebrity tittle tattle but inside the Sunday People there was a two page spread about the massacres on pages 8 and 9 and the `Voice of the People` editorial did express some sympathy for the Gazans. The highbrow Economist magazine said `Stop the rockets but lift the siege` which may indicate a shifting of opinion in high places.

The Sunday Telegraph front page said nothing on Gaza while the front page of the Sunday Times had a piece headlined ` Anti-Semitic attacks scar British Cities` . The weekend `I on Saturday` version of the Independent had a half two page spread on pages 10 and 11 which was the top half below which were adverts for insect repellent and a Citroen car. The most prominent text on the two half pages spoke of `Hamas urges Palestinians ‘to set the territory on fire’ ` though in smaller headline text opposite there was `Israel rejects Kerry’s plan for ceasefire`.

The Socialist Worker devoted its first four pages to Gaza including a detailed report of the protest in London on Saturday 19th July which Channel Four News of that day decided was worth 10 seconds of coverage with just a brief glimpse of the event.

The Observer had a distressing front page photo of Palestinian women in the ruins of their homes in Beit Hanoun headlined `A pause in the bombing and the ruins of Gaza are laid bare`. On pages 8 and 9 there was a huge and very moving pictorial showing the devastation of the Shejaiya district of Gaza City after days of shelling by the Israeli Defence Forces. It seems that Israeli forces are always `defence` forces while Palestinian forces are terrorists or militants. While the photo seemed to say it all the banner headline above read `Gaza truce in peril after Hamas ‘resumes its attacks on Israel’ `. The first paragraph of the lengthy article talked of `The war in Gaza appeared to be on the brink of resuming last night after an extension a 12-hour humanitarian ceasefire was rejected by Hamas amid reports of renewed rocket fire towards Israel. ` The inference being that Israel is being very reasonable in offering a ceasefire which the unreasonable militant group Hamas rejects. On pages 36 and 37 of the Observer there was detailed analysis by professor of Middle East policy studies Rosemary Hollis as well as views from Gaza and Tel Aviv. The two page spread was headlined `Israel cannot ignore deadly tide of crisis sweeping the region`.

It is obvious that the journalists are being careful not to upset Israel and the Israel lobby just as a BBC TV reporter last week spent the first two minutes of his report talking of Israeli casualties and the soldier Gilad Shalit who was held hostage for 5 years from 2006-2011 before being released in an exchange deal. It might be asked what he has to do with the current conflict.

It might be sensed that there is something different this time, there seems to be a realisation that the siege of Gaza like South African Apartheid cannot go on forever. The people in Gaza have had quite enough of drinking sewage and being bombed to rubble very couple of years or `Drinking the Sea at Gaza: Days and Nights in a Land Under Siege` to use the title of a book by Haaretz journalist Amira Hass.

Israeli spokesman Mark Regev normally so smooth and unctuous was clearly on the back foot when interviewed by Channel Four’s Jon Snow last week. Snow himself who has been to the al-Shifa children’s hospital in Gaza recently was said to be moved to tears by the current situation and you could see tears in the eyes of BBC reporter Paul Mason when he had to tell of the many children killed in his live dispatch form Gaza.

At the time of writing on Monday 28th July there is an uneasy lull in the fighting but until a full ceasefire the awful suffering goes on. The BBC1 lunchtime news reported on the UN’s latest attempts to get a cessation of the hostilities. The BBC website of mid afternoon Monday 28th July reported: UN Secretary General Ban Ki-moon has urged an immediate halt to violence in Gaza, saying the Palestinian territory is in a "critical condition".

"In the name of humanity, the violence must stop," he said in New York after returning from a visit to the region.

I think I would second that.